Who Can Parents Trust? 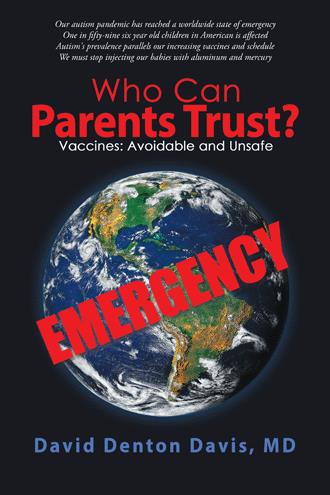 Who Can Parents Trust? Is the title of a soon to be published book about vaccine related adverse events written by David Denton Davis M.D. His subtitle, “avoidably unsafe” is based upon a Supreme Court Justice’s comment parents must accept the fact vaccines are already known to be dangerous, but are “unavoidably unsafe.” Dr. Davis, a former Charter member of the American College of Emergency Physicians (ACEP), believes a vast majority of possible vaccine related injuries have never been recognized or reported by his colleagues. Until actual data is revealed no one should accept unavoidable as an answer. Physician failures to report may number in the millions making it impossible for anyone to conclude vaccines are safe. Dr. Davis painstakingly looks at scientific studies conducted on premature babies revealing evidence of direct physical harm and a limited database of known deaths and injuries following vaccinations. He points to a strong likelihood a scarcity of vaccine adverse event reports is directly related to a lack of Emergency Physician awareness and doctors, especially Pediatricians, being paid to vaccinate and remain silent. As a result, parents should not trust anyone proclaiming vaccines are safe. Instead they must exercise informed consent by saying no to vaccine risks, actively opposing vaccine mandates, joining prochoice coalitions and, if necessary, being prepared to march in the streets to protect their children and First Amendment rights. Sympathetic concerned physicians will appear and become involved in a babies’ lives matter movement. Based on research and fifty years of clinical experience, Dr. Davis is convinced vaccines represent our only plausible explanation for current epidemics of sudden infant death, autism, autoimmune disorders, neurological illnesses and childhood, allergies and cancers. Known vaccine adjuvant toxins deliberately being injected into newborns and infants are triggering the injury mechanism. Knowing vaccines were causing serious harm makers asked for and were given governmental immunity in our 1986 National Childhood Vaccine Injury Act (NCVIA). Actual vaccine safety determinations would depend on a Vaccine Adverse Event Reporting System (VAERS). If a death or illness occurred within 28-45 days following a vaccine(s), VAERS mandated a physician, parent or third party initiated adverse event report be sent to our Department of Health and Human Services (HHS) for investigation. Dr. Davis claims vaccine compliance payments combined with keeping Emergency Physicians out of the reporting loop have made NCVIA a Vaccine Makers Immunity Act (VMIA). According to Dr. Davis evidence shows less than 2% of actual adverse vaccine events have ever been submitted over the past thirty years. Consequently, it is impossible for anyone to conclude vaccines are innocent and have not played the prominent role in our growing epidemics is absurd. He goes on to suggest missing VAERS data confirming actual vaccine damages, can likely be found in insurance company files. Without pleading for reporting help from his emergency colleagues the evidence may be found in insurance databases. A recent study has shown Mississippi has both the highest infant death rate and America’s unhealthiest children. This state just happens to also have America’s highest childhood vaccination percentage. A mandatory no vaccine exemption schedule shows 199 out of every 200 infants and children are up to date. Dr. Davis is certain a retrospective Mississippi VAERS vaccine audit would likely uncover the extent of inoculation damages in that state. Based upon what he considers deliberately hidden damaging evidence, unprecedented Neonatal Intensive Care Unit (NICU) vaccine studies, manufacturer’s warnings, $3.8 billion dollars already paid to our vaccine injured and epidemics paralleling our vaccine schedule, Dr. Davis recommends revoking NCVIA and returning responsibility for product liability to vaccine makers. In the interim, anticipating a vaccine injury cover-up will be allowed to continue, Dr. Davis will ask for ACEP’S full cooperation documenting and reporting deaths and illnesses following vaccines. Knowing minor vaccine related adverse events may be harbingers of much worse future consequences, he warns physicians to begin listening to parents in order to avoid possible allegations of malfeasance. With stark similarities becoming evident between business practices of our tobacco, pharmaceutical and petrochemical industries, Dr. Davis believes they must be treated similarly. Tobacco agreed to a Master Settlement. Currently our vaccine and chemical makers are using lobbyists to pay for legislative assistance and mandates designed solely to enhance profitability as death and disability attributable to their products grow.

Vaccines are not safe. A US Supreme Court justice has stated vaccines are “unavoidably unsafe.” Written by an emergency physician, Who Can Parents Trust? takes the opposite viewpoint, sharing reasons for parents to consider vaccines as both avoidable and unsafe. Doctors often fail to report serious illnesses and deaths following vaccinations. Thus, evidence for vaccine safety cannot be verified, given that it is predicated upon such a small reporting sample. With a paucity of adverse event reports, vaccine makers and physician advocates have gotten away with using coincidence rather than consequence as explanations for autism and SIDS. Over the past thirty years, in conjunction with an escalation in vaccination numbers, millions of vaccine-related injuries have gone unreported. Consequently no one has any right assuming vaccines are safe. What’s more, parents have a right to know vaccine risks and potential benefits. If a parent or caregiver perceives risks outweigh benefit, that person has a right to say no. In this treatise, a physician seeks to build an ethical and moral case favoring reasons that parents should not trust anyone but themselves in the matter of vaccines and their children.

David Denton Davis, MD, is a Vietnam veteran and a charter member of the American College of Emergency Physicians (ACEP), established in 1968. He served as an elected board member during the creation of emergency medicine (EM) as a specialty. He practiced emergency medicine in Boston and later in San Diego. He is also the author of Dancing Cats Silent Canaries and Polly’s Promise. He currently lives in La Jolla, California.