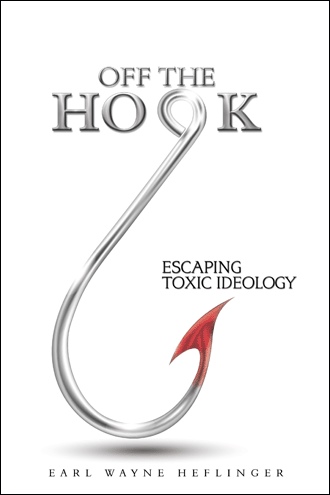 My eight-year-old heart was beating wildly. I felt trapped. It was a damned-if-you-do, damned-if-you-don’t kind of feeling. What I was about to do was probably the scariest thing I had ever considered doing. But—and this is the part that was really weighing on my mind—not going ahead and doing it was an even scarier proposition. I was terrified. I knew that once I moved a muscle, every eye in the place would be on me, and there’d be no turning back. By now I had become thoroughly aware of the emotional attachment to my impending decision that my parents had and, to some extent, so did the entire congregation. The organ music and the preacher’s “invitation” all were part of the same message; a message that had already been imprinted on my young brain and that saturated my consciousness: Jesus wants you to accept him as your savior now, before it’s too late, so that you will go to heaven and avoid eternity in hell. Most people think of heaven and hell as final destinations, according to religious teaching, one of which each soul will experience after death. At this point you may be wondering, What created such a terrifying sense of urgency? Why would a young child be so afraid of death that the fear of hell could have such an emotional impact? Believe me, it wasn’t the fear of death, or of hell after death, that was on my mind. No healthy eight-year-old thinks he is going to die anytime soon. No, this was something else. Something my parents told me was definitely going to happen and could happen soon. This was way worse than the normal kid fears: bogeyman, monsters under the bed, that sort of stuff. Nothing I could think of then, or can think of now, could have been scarier to a child. You see, a few weeks earlier, my four-year-old sister had decided she wanted to be “saved,” and had “gone forward” during a church service. For those not raised in evangelical Christianity, I probably need to explain some concepts here. Christians generally believe that Jesus was the Son of God and that he died on the cross to save us—we who were all born as lost sinners—from our sins. Evangelicalism is a form of Protestant (non-Catholic) Christianity which emphasizes personal conversion—being “born again”—by means of merely accepting Jesus into one’s heart as his or her personal Savior. Evangelicals also believe in the importance of sharing the “good news” of the Biblical story of salvation through Jesus Christ. I was raised in a fundamentalist Christian home. The dictionary definition of fundamentalism is “an attitude stressing strict and literal adherence to a set of basic principles.” Christian fundamentalism is a variety of evangelicalism that believes that the Bible is the literally-true Word of God. In our home, these teachings were taken very seriously. People use the term “life or death” to refer to very serious issues—issues of survival. In the fundamentalist mind, “life or death” is nothing compared to eternal life and eternal damnation; and that decision to accept Jesus is the most important decision one can make—one with eternal consequences. The belief is that anyone who accepts Jesus as their savior is “saved” and will go to heaven when they die, and everyone else is lost and will go to hell when they die, for all eternity. And, they teach, time is of the essence. Because the Bible says that Jesus is going to come back some day, in an event known as the Rapture, and gather up into the sky all of his followers, before the earth is basically destroyed in Armageddon. In spite of the fact that Jesus has been going to come back any day now for the last two thousand years, my family felt a sense of urgency. That the Rapture might be imminent. My mother once told me that when she was getting married to my father, the pastor of her church tried to talk her out of getting pregnant, because Jesus’ return and the end of the world as we know it was going to be very soon. And so, in addition to the fear of eternal hell, I now had an even more terrifying prospect to consider: my parents told me that, now that my sister was “saved,” if Jesus came back tomorrow, and I had not accepted Jesus, the three of them would be taken up in the Rapture. Without me! That if I didn’t take a particular action before it was too late, my entire nuclear family would certainly leave this world forever, and I would be left behind! And that this could happen at any time! This was the greatest fear I could imagine: the fear of abandonment! So there I was, sitting on the hard wooden pew in our Independent Baptist church, on a Sunday evening. The organ was playing. No doubt it was “Just As I Am” (Just as I am, without one plea, but that Thy blood was shed for me…). And the preacher was asking for the third or fourth time, does anyone need to come forward, confess his sins, and accept Jesus into his heart? And so, I stood up and took the first trembling step, past several rows of pews, down the aisle of the church, to be greeted by the pastor in front of the altar. When asked, I said, Yes, I wanted to be saved and to accept Jesus as my savior. I felt I had no other choice. After that, my parents were happy that now, I too was saved. I felt as though a burden had been lifted, and for the time being I felt OK. But somewhere, deep down, I knew something that would take years for me to look at honestly: I did what I did that evening not out of love, but out of fear. Terror, in fact.

The author uses his own personal story—of being born into a Christian fundamentalist family with extreme beliefs—to paint a vivid picture of what life is like in toxic ideologies such as fundamentalist religion. The book has three parts. The first describes the spiritual abuse of his childhood due to stifling rules and restrictions inflicted by his parents, caught up in their church’s teachings, on his thought processes and behavior. The remarkably poignant stories show in painful detail how his self-esteem was crushed, how he was never intended to think for himself, and how he was made to feel different and totally out of place in the world—all by “loving” but misguided parents. During his school days, his social life was severely stunted because he felt like an outsider everywhere but in church. The second part discusses his lifelong struggle with spiritual healing and his transition from a spoon-fed belief system to a personally chosen worldview. He thoughtfully muses about all the significant elements of religious/spiritual belief systems—God, Jesus, the Bible, sin, morality, science, life after death, marriage, divorce, and others—and contrasts his evolving beliefs with those of organized religion. This is presented to give the reader a comprehensive illustration of how one particular seeker has constructed a personalized belief system through continual rethinking and updated understanding. The third part calls on the author’s advanced education and professional experience in business and government in analyzing and developing systems and procedures. It describes—with a wealth of tips and checklists—the process by which he escaped a toxic ideology and came to feel intellectually free and “off the hook.” It ends with heartfelt encouragement for anyone similarly affected by repression to accept all available helpful resources and muster the determination to claim their personal power.

Earl Wayne Heflinger, M.S., M.A., is a semi-retired information technology professional, an experienced wedding minister, an accomplished artist in acrylics, and a philosopher by nature. He and his wife Linda are both ministers, credentialed by the Universal Life Church, since 1991. They have performed more than 2,500 weddings, commitment ceremonies, vow renewal ceremonies, property blessings, and memorial services. Their ceremonies, which are self-developed—influenced by sources from a variety of spiritual disciplines and their own life experiences—are meaningful and spiritual, but not specifically religious. They own and operate The White Rose Chapel in Colorado Springs. Earl is a father and grandfather. He and Linda collectively have five grown children and ten grandchildren. They live, along with their two dogs and several foster parrots, in Colorado.