Where the White Rose Blooms

A History of the Stuarts 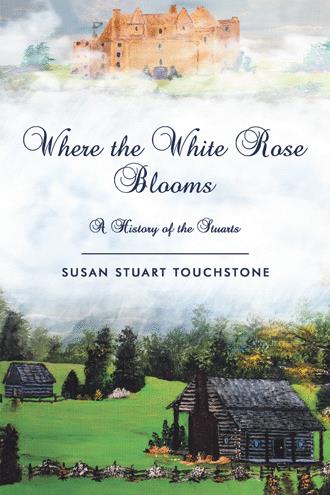 Royal Blood! Heir to the Throne! It is impossible to know when the belief in our descent from royalty began because it has always been. Not one in our family, living or dead can or could remember the first time we were told that royal blood flowed in our veins. This belief has been passed down our genealogical line for more than two hundred years. Our belief is founded in the story that while Scotland and England were being purged of the Royal House of Stuart, a royal male infant was born, and smuggled directly out of the country. Being heir to the throne, the babe would have been beheaded had he remained in the country of his birth. Is this a myth? Or could it be a true story? There are no legal documents to back up a true story, so the foundation of our belief is in the mysterious birth of a royal infant who, according to historians and Stuart antagonists, was never born. From this viewpoint, our belief is a myth but, based on circumstantial evidence and the confession of a Scottish doctor, the story is true and the infant simply became, in every true sense, the “Lost Heir” of the Royal House of Stuart I have uncovered enough evidence to support a true story; a story which leaves no reasonable doubt as to who we are, where we came from, and why it was necessary that the “White Rose” be transplanted in foreign soil. A distraught Prince of our Royal House once asked his Cardinal brother, “But where will the White Rose bloom again?” From that question sprang the title of this book, “Where the White Rose Blooms”, wherein lies the answer.

BOOK ONE is a profile of Charles Edward Louis John Casmir Sylvester Maria Stuart. The fact that the Bonnie Prince was such a controversial figure of his time makes it hard to glean an accurate picture of his character and personality and to know when we have succeeded. The best we can hope for is that the better prospective offered by the intervening years may be of some help. Since some of the more extreme pro and con feelings have passed away with the years, we can now sort some of the facts from the surfeit of emotions of those who wrote. From all accounts, it is evident that Prince Charles was conscious of his important position in life and, at an early age and with remarkable will, showed his determination to be prepared for any fate. BOOK TWO is a profile of the Stuart family whose ancestor mysteriously showed up in the New World as an infant with a royal legacy. Circumstantial evidence and the confession of a Scottish doctor are powerful indications that the infant was the son and heir of Prince Charles Stuart. The arrival in America of an infant with a royal legacy is significant within itself, but when linked with the fact that he arrived bearing the prince’s name, and within the early years of his marriage, it becomes more significant. The lovely book cover of Where the White Rose Blooms was created by Thomas D. Stuart.

Susan Stuart Touchstone’s roots run deep in genealogy and family history. Her educational background in both have given her a broad spectrum from which to approach the many topics which she addresses in her current book, Where the White Rose Blooms. She grew up and still lives on the property upon which her great-great grandparents settled in 1827, located in the heart of Southern Mississippi. From this vantage point, she perhaps enjoyed and appreciated the intrigues of her ancestral stories more than most.