The Psychology of Hope

Keys to Greater Success and Happiness 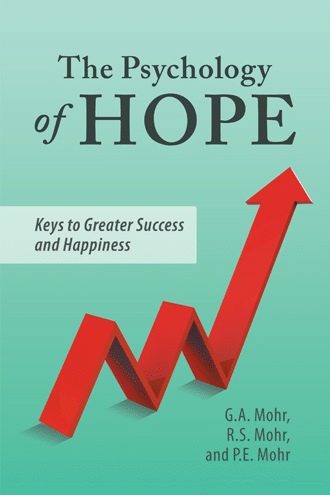 Hope Improves Life Hope against hope, and ask till ye receive. James Montgomery, “The World Before the Flood”, The Poetical Works of James Montgomery (1840-41). Scientific proof A home-based study of almost 800 people included the simple question: Are you hopeful about the future? Regardless of their sex or ethnicity, 91% of the respondents replied “yes”, the other 9% replying “no” (Lopez, 2013). The two groups, the “hopeful” and the “hopeless”, were almost the same age (averaging respectively 69 and 70), had the same levels of education and health, with “no significant differences in blood pressure, body mass index, and drinking behaviour”. The hopeful, however, had higher levels of physical activity, fewer were smokers, tested for much lower levels of depression and higher measures of social well-being, had more social contacts, and were slightly better off financially. About a decade later only 11% of the hopefuls had died, compared to 29% of the hopeless, the principal researcher concluding that: “If you are hopeless you are less likely to keep doctor’s appointments” (Lopez, 2013).   Hope vs. optimism The 2nd edition of the Macquarie Dictionary defines hope as: 1. expectation of something desired; desire accompanied by expectation. 2. a particular instance of such expectation or desire: a hope of success. It defines optimism as: 1. disposition to hope for the best; tendency to look on the bright side of things. while defining optimistic as: 1. disposed to take a favourable view of things. Here optimism is a mood, a state of mind, usually without a specific goal, whereas hope is usually associated with a particular wish or ambition. According to Lopez, however, hope is more important: But when life throws us a curve, when the going gets tough, optimists get stuck and frustrated. Hopeful people shine in negative situations. They are energized to act and they find meaning and dignity in moving ahead, whatever the challenge. Creating goals Happy and successful lives are far more likely if we plan them by creating goals. These should be realistic in terms of time and resource requirements, and goals which we are enthusiastic about are, of course, more likely to receive attention and thus be achieved. When a goal involves solving a problem it is best to think positively about it. If one is having problems with a co-worker Jim, for example, rather than think: I want to have less trouble with Jim it is better to think: I want to make friends with Jim and act positively by, for example, paying him polite compliments occasionally. It is also best, of course, to choose goals that your abilities are best suited to, and Chapter 14 details some systematic methods of planning for a successful life. Leading with hope Lopez (2013) cites a telephone Gallup poll of more than 10,000 people which asked them what three words best described how bosses or community leaders contributed positively to their life. It turned out that words such as wisdom were rarely mentioned, but that respondents said “they want the people they serve to meet four psychological needs: compassion, stability, trust, and hope.” Lopez concludes that most leaders “do not spend enough time making hope happen” but spend more time reacting to problems rather than planning for a better future. The Gallup poll found that 69% of people who said their workplace leader make them enthusiastic about the future rated highly on measures of their involvement with and enthusiasm for their work. They were also more innovative, productive, and likely to stay longer with the company. On the other hand, only 1% of those who did not find their boss made them enthusiastic about the future were committed to and enthusiastic about their work. They were also likely to be physically and mentally unhealthy, and to undermine the work of others. 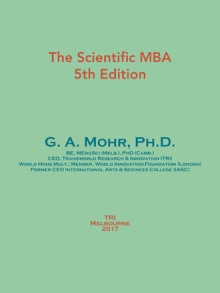 Hope, optimism and positivity can play an important role in making our lives, and the lives of others much better. Some of the main topics discussed in this book include: » The importance of encouragement and hope for the young. » How religions were invented and gave us false hope. » Hope improves health, life and longevity. » How positive leadership improves workplace productivity. » How advertising and propaganda ‘brainwash’ us. » The psychology of attitudes and attitude measurement. » The wide range of psychological disorders. » The psychology of habits. » Contact hypothesis and an attitudinal model of conflict. » Treatments for psychological problems. » Building self-confidence, hope, and self-reliance. » Planning a successful life. » Dealing with bad and psychopathic bosses. » Measuring and improving the quality of one’s life. » The 10 laws of a new religion. G.A. Mohr did his PhD in Churchill College, Cambridge He published 50 international papers & more than 20 books, including: » A Microcomputer Introduction to the Finite Element Method » Finite Elements for Solids, Fluids, and Optimization » Curing Cancer & Heart Disease » Heart Disease, Cancer and Ageing » The Pretentious Persuaders » The War of the Sexes » The Variant Virus » The Doomsday Calculation » 2045: A Remote Town Survives Global Holocaust » The History and Psychology of Human Conflicts » Elementary Thinking for the 21st Century » The 8 Week+ Cure for Cardiovascular Disease » The Scientific MBA » and co-authored with Richard Sinclair & Edwin Fear » (nom de plumes for R. S. Mohr and P. E. Mohr) » World Religions » The Brainwashed » World War 3 » Human Intelligence, Learning & Behaviour » The Evolving Universe: Relativity, Redshift & Life from Space.

G.A. Mohr did his PhD in Churchill College, Cambridge. He has published fifty international papers and more than twenty books.