Rainbows from the Heart 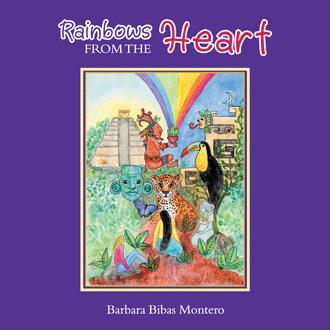 Rainbows from the Heart A red-tailed hawk flew over the Yucatan jungle in Mexico and came upon a clearing with giant mounds covered in overgrown shrubs and vines. He circled the area and let out a haunting screech. As if at his command, the overgrowth dissipated and the mounds transformed into their original state — tall majestic pyramids and temples. An ancient Mayan city came to life. The hawk, a symbolic messenger of higher vision who is said to connect heaven to earth, landed in a sacred ceiba tree to watch the activity below. The bustling city teemed with life. Mayan women clothed in colorful garb scurried to and fro with baskets of corn and pottery urns filled with fruit and cacao. In a ball court at the base of one of the temples, young men enthusiastically attempted to kick a ball through a hoop. Artisans fashioned clay pots and merchants sold trinkets of jade and turquoise in the marketplace. Musicians played flutes and shook rattles as children danced. Throughout the city were stone stelae (statues) inscribed with glyphs and pictures of the gods. Located at the base of the main pyramid was the sculpted image of Kukulkan, the revered feathered serpent god. A massive stone circular Mayan calendar was displayed in the central plaza. The hawk took flight from the tree and circled one of the temples. At the pinnacle of the temple stood an elite group of priests dressed in ceremonial regalia with feathered masks and jaguar skins. Silently they awaited a young girl who, escorted by yet more priests, ascended the colossal staircase. The girl was beautiful with long silky dark hair. She was dressed in a simple white tunic with a turquoise amulet around her neck. Her beauty drew the faintest nods of acknowledgment from the waiting priests as she reached the platform at the top of the staircase. An altar had been prepared and she was laid down while four chacs (assistants) held her feet and hands in place. The beautiful young girl was to be a sacrifice. The priests invoked the spirits as they chanted and shook their rattles and beat their drums. The head priest raised his hand, which held a decorative flint dagger. Impassive faces reflected a trance-like state. The wind picked up, ominous dark clouds appeared, and an overhead storm delivered rain and crashing thunder. The priests feared the Moon Goddess Ixchel would show her displeasure and punish the city with another flood if she was not appeased with a human sacrifice. At the moment the dagger was about to be plunged into her chest, the young girl closed her eyes and took a deep breath. From her heart emerged a translucent band of bright rainbow light that flashed into the hearts of the priests and illuminated onlookers. All gasped and held their hands over their chests. The dagger clattered to the ground. The winds died down, the rain and thunder ceased, and blue sky radiated over the scene. Once again, the hawk soared over the temple and let out his signature haunting screech. As suddenly as it had appeared, the Mayan city dissolved into overgrown mounds. * * * * * * The hawk continued his sacred journey until he came upon the crop filled fields of modern-day southwest Florida. He circled a few times to observe the activity. Down below farm workers in the fields picked tomatoes. Trailers were packed closely together on the outskirts of the fields. Female farm workers washed their dark-haired children with hoses and swept with brooms around the trailers. Some cooked over open fires while children played with makeshift soccer balls on a barren dusty area. The hawk headed for a small forest, which separated the surrounding fields from a suburban area of modern homes with well-maintained yards. Fair-haired children played in the streets on bicycles, skateboards, and scooters. The hawk flew over a school as students exited the building. Finally, he landed in the fronds of a palm tree on a residential street. With keen eyes, he surveyed the scene. His gaze settled on an angry blond schoolgirl who marched down the sidewalk with a frown on her face, heading home with a backpack on her back. Into her path, a goofy teenage boy careened out of his driveway on a skateboard and cut her off. She stopped short. He laughed at her mockingly. She growled and stomped off.

Rainbows from the Heart tells of two young girls, very different, yet connected. Maya, Anglo and of relative affluent economic means, meets Luna, the daughter of Mexican migrant farm workers temporarily camped near Maya’s home in rural Southwest Florida. In their brief encounters, Luna imparts a lifelong gift of a simple ritual passed down through the ages from ancient Mayan times. The exchange opens the eyes and heart of Maya, who realizes, almost without knowing, how spreading love and forgiveness enriches the giver. Interwoven into the story are elements of Mayan mysticism, which focuses on moving the struggle for justice beyond blame and anger to new possibilities in a non-violent way. Rainbows from the Heart transcends the material world and takes us beyond the human condition into a world of spirit. The story brings this gift back into the everyday lives of two young girls; using the power of ancient tradition to further this journey on earth we call life.

Barbara Bibas Montero is a writer, a business entrepreneur and a proud mother of two beautiful daughters. She has authored a number of books, short stories and magazine articles. On her business side, she co-founded a global financial technology company and has held management positions with several large multinational corporations. Even though she has an extensive business background, her journey has led her to pursue writing stories of the incredible and matters of the heart. She recently co-authored a book called The Veil, which is about true stories of the paranormal. Her short stories include Behind the Veil (within the book Transitions of the Soul) and Two Angels from Austria (within the book Bekindr.) Barbara received her undergraduate degree in English from Boston College and her MBA at Thunderbird School of Global Management. Presently, she is a Wharton School fellow for executives. She currently lives in Miami Beach, Florida.