Health Provider Sues Client. What to Do? 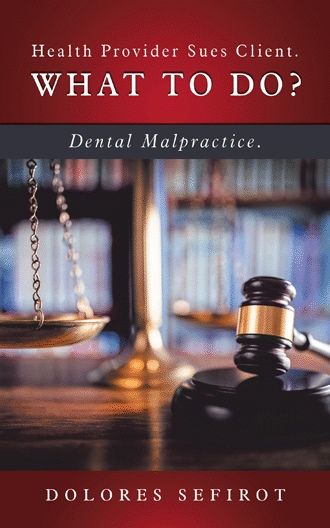 8 THE PERMANENT BRIDGE The final bridge was made exactly like the first. No corrections to the teeth size, or speech problems. Besides the molar on the back hit first when chewing. The bite had not been corrected at all. There was no hope of relief any more. I reported, "my own jaw teeth are hurting. Porcelain teeth on the new bridge hit like a rock" I had now porcelain teeth; a stone pounding on the back molar. They both made the same excuse; We did not do any work on that tooth. It is not our fault if it hurts." The bridge became loose often, and it was replaced several times. They were using temporary glue to make sure that the bridge fitted properly before installing it permanently. Finally, patience wore off totally, and the assistant decided to install the bridge permanently. Now it would not come off even if they tried. Apparently, neither the Dentist nor the Assistant could diagnose the reason for the bridge to come loose. Instead they glued it permanently. I certainly reported enough times and gave a description of the problem. It seems that they could not believe me or did not want to deal with the mistakes they had made in their work. The pain continued and finally the molar affected fell off. The bridge now pounded on the next tooth. Amazingly, Neither the Dentist nor the Assistant could believe that I was in pain. One day I walked out of consulting with the Dentist. I was outraged because the Dentist had prescribed Nembutal for the pain. (So, he accepted that I was in pain.) Instead of correcting the bridge. The pain had been consistent throughout the work on "partial" and two complete bridges. The only change was that the pain increased and spread throughout the area. When he handed me a prescription, I said "YOU take Nembutal" And walked out to face the Dentist's wife handing me a bill. As I looked at the bill, Wife commented to someone that I must be in love with the Dentist because I made excuses to see him. (That is what I heard.) I looked up and responded as softly as I could. "No Mam, I am not in LOVE, I am in PAIN. and your husband has not done his work right.

This book was actually started when I kept journals needed to keep track of events. I was in so much pain and distress that I was unable to remember events, dates, or what was said. For instance, the journal I kept concerning my attorney’s actions or lack of actions would seem incredible. By keeping a journal, handwritten, I would later enter it on a computer because the handwriting was not very clear. After the problem was over, I just wanted to go on with my life. It seems, however, that the community saw me as a problem to be avoided. I was not accepted in the community as a teacher, and they made efforts to prevent me from employment in the system. Eventually, I left and moved on. I believe that people going through serious life difficulties would benefit from some of the actions possible to help overcome the difficulties that life drops on us. Or are we the cause?

Readers would benefit from some of the steps taken by author; Dolores Sefirot. Due to health problems caused by poor dental work, she researched for ways to recover. All kinds of pain treatment were useless. She suffered a breakdown that led to psychiatric care; learning how to overcome pain, stress, loss of normal speech. Eventually she decided that pulling the teeth that held the bridge, would help. It did help. Legal services failed too. This led to legal research. She represented herself answering to the Dentist who sued her for fees she refused to pay. At 50 years-old she went to study again; Masters in Education with Emphasis in Psychology and worked as a Licensed Professional Counselor. She retired at 72 years-old. Dolores wants readers to see how a problem that seemed impossible to resolve was overcome with the help of all the Dentists, Psychiatrist, Writers, Court that provided their skills to overcome similar situations.