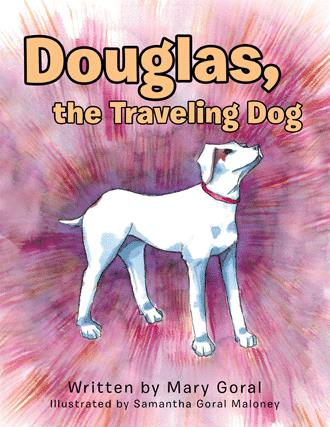 A long time ago when Gram and Grandpa were young, before Grandpa became a lawyer and Gram became a professor, Grandpa brought home a surprise. This surprise fit in his coat pocket and was small, white, and furry. “What in the world?” asked Gram. “Why, he’s not bigger than a guinea pig!” “I know”, replied Grandpa proudly. “I found him along side of the railroad tracks. He was crying and whining – probably abandoned by someone.” “He’s adorable,” said Gram. “What should we name him?” “He looks like a slug,” Grandpa said laughingly. “Let’s name him Doug the Slug.” The name stuck but was later lengthened to Douglas. And just like that – Douglas became a member of the family.

Dr. Goral, a gifted storyteller, began telling the Douglas stories to her grandchildren and then to school-aged children around the country. The love and interest children showed when hearing the true stories about her crazy dog prompted Dr. Goral to begin putting the stories in print. Similar to the surprise humor in Eric Litwin’s and James Dean’s “Pete the Cat” books and filled with beautiful watercolor illustrations reminiscent of the paintings in Alexandra Day’s “Good Dog Carl” books, Dr. Goral’s first Douglas story is sure to delight and entertain readers of all ages. Funny and full of surprises, Douglas will win the hearts of all who hear his story.

Mary Barr Goral, Ph.D., began her career in education over 30 years ago. After teaching in the public schools in Bloomington, IN for 11 years, she received both her masters and doctorate in curriculum studies and math education from Indiana University. Dr. Goral taught in higher education for 12 years and works with Public Waldorf schools, coaching and training teachers through her educational organization, Transformational Teaching. Dr. Goral originally published books and articles for her academic career. Author or the book “Transformational Teaching: Waldorf-inspired Methods in the Public School”, and over 10 peer-reviewed articles, Dr. Goral has turned her love for writing, children, and dogs into her first children’s book. Mother of five and grandmother of eight, Dr. Goral’s story of “Douglas the Traveling Dog” is based on the real-life adventures of her dog, Douglas. Samantha Goral Maloney is a native of Milwaukee, though she has traveled and lived throughout the Midwest. Samantha first fell in love with the fine arts when she was a student at a Waldorf school and later a fine arts high school. She attended Indiana University – Bloomington for her undergraduate degree where she studied Art History. As she entered graduate school at the University of Wisconsin – Milwaukee, she anticipated studying Medieval illuminated manuscripts, but switched gears to focus on museum studies with an emphasis on exhibition displays and visitor experiences. Samantha graduated in 2019 from the University of Wisconsin – Milwaukee Department of Art History with a Master of Arts degree. Her water color paintings in the first of the Douglas books bring even more life and beauty to the pages.