'EQUINE EPITAPH - UNDER THE RAINBOW' 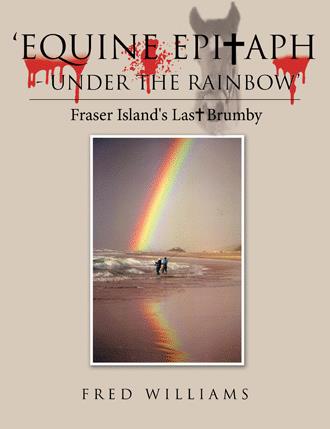 We open our sand blasted glazed window in December 1851. The place is Fraser Island Queensland Australia. It is the ‘World’s Largest Island of Sand’ built up on a massive bed base of ever shifting sands. This sand island was formed by thousands of years of sand erosion that was carried along in the ocean currents, then washed up on Eastern beaches and then, in turn blown inland. The shape of the island is as unique and as diverse in design as the sand grains it’s formed of. Out of this erosion process or paradox comes this unusual and phenomenal island of sand, that incredibility produces a rich and diverse tapestry of grass plants, shrubs and trees along with its designed dependent biodiversity of animals. WHY IS IT SO SPECIAL? I believe Fraser Island (K’Gari) is a ‘special place’ because all life is supported and revolves around what appears to be nothing more than pure golden sands.

To my mind, few in government realised that chasing dollars did not properly address the island’s natural guidelines, it’s highly fragile – yet it is also proven to be as tough as nails but all this comes bound-up within Mother Nature’s strict set of guidelines. Government’s plan of Interference first began in 1971 with the Queensland Parks and Wildlife Service (QPWS) and according to (August Overlander 1985) Parliament ratified the ‘Tourism enterprise’ idea “while the people slept” the Minister for Tourism Peter McKechnie introduced strategies: to introduce very high numbers of tourists (with no ceiling limits on numbers using the beach as the main access highway): interfered, sterilized many rare and valuable stallions. A pen stroke in 1992, shot or removed the remaining rare wild horses (Hannant 2018). To Breach these principals you will quickly see nature’s response - as all hell broke loose, the weapons were imbalance, impacts and environmental chaos. Scenes this ‘special island’ never ever knew before in the annals of history. It’s an account of deliberate ENVIRONMENTAL CHAOS.

First, rid the island of its Aboriginal stronghold, in 1851 under Frederick Walker a heavy and indiscriminate drinker (Williams 2002). He was the controversial European leader that led the Native Police on a punitive raid creating much havoc and mayhem, slaughtering the traditional owners’ stronghold that dated back over the last 6,000 years. Just like the Conquistadors, riding horses, armed with Snider Carbine guns was no match for spears, boomerangs, wooden shields and Nulla, Nullas’. According to (Tindale 1975) there were three tribes that successfully claimed the island and rigorously defended its territory.

As time fell down the hour-glass in 1994 ‘Ellie’ was the last wild horse to obtain a permit to escape the bias clutches of the QPWS. Around this time we saw reports that starving and some emaciated dingoes described as “their stomachs were stapled to their backbone” according to an eye witness.  Dingoes were desperately hungry interacting with visitors around their campsites because they could smell a mother-load of food. One visitor, had a dingo drag their toddler several meters as the near-by parents were eating their evening meal. Hundreds of visitors had a range of injuries from minor to serious. In 2001 a 9-year-old boy was savagely mauled to death, as all hell was certainly breaking loose.  The manager (QPWS) and Fraser Island Defenders Organisation (FIDO) were responding with media ‘spin’ claiming that visitors were enticing dingoes so that they could obtain a close-up photograph.

Meanwhile ‘Ellies’ mother was spooked and she bolted off with dingoes chasing and biting her flanks leaving her dear little foal to face certain death. If you want to know what happened to ‘Ellie’ - it’s in the book - along with 70+ historic photographs. It is a true story!

The books on Fraser Island all draw to a great extent on the reminiscences and records of people who have long lived TWO DECADES BEFORE Queensland Parks and Wildlife Service (QPWS) set foot on Fraser Island in 1971. The Maryborough Chronicle 20, August 1952: WARNED: ‘GOD FORBID THAT ANY ATTEMPT SHOULD BE MADE TO TURN [Fraser Island] INTO A ‘TOURISTS’ PARADISE WHICH WOULD RUIN ITS CALM SERENITY, ITS NATURAL BEAUTY AND ITS FISHING’. “…visitors had an occasional sight of wild horses and although they saw no dingoes, pad marks around the camp each morning indicated they had been inspected at night by dingoes…” Perhaps, because dingoes’ look like our pet dogs, it can be easily overlooked that they are carnivores. It was it seems overlooked by the manager that failed to follow their own published warning “Dingoes like other dogs are capable of killing people” (dFIDMS 1999) TWO YEARS BEFORE THE ATTACK IN 2001. Instead, the manager insisted in their approved Management Plans on prioritizing uncontrolled numbers of tourists (Overlander August 1985) as a revenue raiser. Failing to adhere to their Duty Of Care Responsibility. It seems they set a financial objective over the ‘Number- 1’ far more obvious Strategy/Priority of Public Safety entering and using the most complex State Run National Park in Australia. In case we forget how serious this is; please remember dingoes are starving and can savagely attack, (like at Waddy Point) according to Dr. Paul Anderson Government Medical Officer said “Clinton Gage was disemboweled his face, neck, lower abdomen and legs mauled” (Fraser Coast Chronicle May 2, 2001.) The author is gravely concerned! A SOLUTION IS DISCUSSED IN THE BOOK! FRASER’S FUTURE IS IN YOUR HANDS!

Born and educated at Mentone Grammar in Victoria Australia. Moved to the State of Queensland in 1969 and developed over the next few years a special love and interest in the history of Fraser Island. Writing as a student of history at first it soon developed into an all-consuming interest in researching the first of three books on magnificent Fraser Island and one other about my Great Grandparents immigration to Port Phillip Victoria on the ‘Red Jacket’ . 1. ‘Written in Sand’ – A History of Fraser Island. 1982. 2. ‘Princess K’Gari’s Fraser Island’. Fraser Island’s Definitive History. 2002. 3. “Wangoolba Prince Amongst dingoes’. 2006 4. Oh! Brother! Against all Odds! 2012.