Solving the Grief and Loss Puzzle

Piecing Together Your New Normal Life Radiant Life Series No. 2 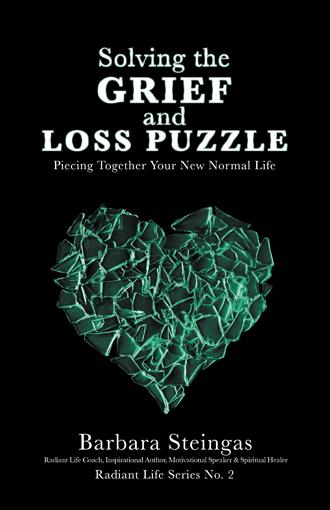 Everyone experiences loss at some point in their lives. Whether it’s the passing of a loved one or beloved pet, the breakup of a friendship or romance, a divorce, getting fired, losing a limb, or suffering a natural disaster -- it hurts. It doesn’t matter if it’s a minor or major loss, traumatic and quick or long and drawn out, we all go through a grieving process to overcome it. This helps us to become stronger -- to create a new normal life for ourselves. How we are able to deal with, cope and process our emotions after these losses and tragedies occur, will determine how the rest of our lives will unfold. We either remain victimized by these experiences, staying stuck in the grief emotions or we can eventually come to some sense of acceptance and explore different joys, and ways to experience happiness in our lives. I first learned about the stages of grief in Physical Therapy school, when we read "On Death and Dying" by Elisabeth Kϋbler-Ross. Over the course of my life, I have experienced the usual sad, yet expected losses of the crossing over of my grandparents, great-aunts, great-uncles, aunts and uncles, etc. However, it wasn’t until the passing of my husband Bob on April 7, 2008 that I came to know a traumatic loss first handedly. It was through this loss that I had the opportunity to feel what it was like to go through the complete grief process. I experienced all the stages in full depth, including suffering from post-traumatic stress for the first nine months. After our first year of marriage, the Olympic skater Sergei Grinkov died on the ice from a heart condition. Being that I felt Bob resembled Sergei, something about that incident shook me up. It caused me to have an ominous premonition that day because Bob didn’t answer the phone or call me back in a reasonable amount of time after my daily call to him from work. I somehow knew that this would be the day he, too, would meet his maker. The rational part of me kept saying that I was just being paranoid. For the next twelve years, he answered the phone except for two instances where he didn’t for several hours because he didn’t have enough signal. During those incidents, I just prayed that he was alright and would call back, which thankfully he did. However on that fateful day in April, Bob didn’t answer or call back before it was time for me to come home from work. To stay calm, I just kept telling myself how he must be out in the yard doing work, and to stop being so paranoid. Even when I pulled up in the driveway, got out of the car, and saw our cat Fluffy sitting on the bedroom window shelf that Bob had made for her, I calmly said, “Hi Fluff, where’s daddy?” As I entered our home, I called out, “Hi honey, I’m home.” No response. I figured he was outside organizing the shed, and couldn’t hear me so I went out through the sliding door onto our back deck. Again, no sign of Bob. Then I thought that he must be in the shower downstairs. Being he was 6’ 1” tall, Bob liked the shower stall in that bathroom rather than the tub shower upstairs closer to our bedroom. I grabbed the Longaberger basket at the top of the stairs before heading down to put the recycling objects inside it in our recycle bin in the back room. As I got to the bottom of the stairs and closer to the bathroom, I didn’t hear the water running or see him standing by the sink so I knew something was terribly wrong. Like a slow motion scene out a movie, I dropped the basket to the ground, and ran upstairs to our bedroom. I was not prepared for what I saw on the bed, the bed that we had shared since moving into this home in November of 2001. Bob was lying face down, and the television on top of the five drawer high dresser was a solid blue color meaning it had been on too long causing the satellite portion to have turned itself off. Additionally, an empty Gatorade bottle was lying next to him. With great trepidation, I turned him over to find his face distorted from having been in that position for many hours. Bob had suffered a fatal heart attack, and was already in rigor mortis. It was something out of a scene from a Twilight Zone episode. Immediately, I went into shock because I can’t remember how I got the phone in my hand to call 911. I was so distraught that the operator had a difficult time understanding what I was saying so I had to repeat several times, “My husband is dead!” His training must have dictated this response, “Do you know CPR?”

Everyone experiences loss at some point in their life. Whether it’s the passing of a loved one or beloved pet, the breakup of a friendship or romance, a divorce, getting fired, losing a limb, or suffering a natural disaster, it hurts. We all experience a grieving process to overcome it, helping us to become stronger and create a new normal life. How we cope with and process our emotions after these losses and tragedies occur determines how the rest of our lives unfold. We either remain victimized by these experiences, staying stuck in the grief emotions, or we come to some sense of acceptance and explore different ways to experience happiness in our lives. In Solving the Grief and Loss Puzzle, author Barbara Steingas pinpoints the top seven body, mind, emotional, and spiritual strategies key to dealing with and recovering from the loss of a loved one and other forms of grief. Based on her personal experiences, she shares how she pieced together her new normal life of health, happiness, and joy after the devastating losses of her husband and then three years later, her fiancé. Her advice helps heal the mind and the heart.

Barbara Steingas is a native of New Jersey and an award-winning, bestselling Amazon author (The Healing Puzzle and Solving The Crohn’s & Colitis Puzzle). She is also a Radiant Life Coach and an inspirational speaker, holding a Certified Convention Speaker designation. In addition, Steingas is a member of the National Association of Experts, Writers, and Speakers. This is her fifth book.