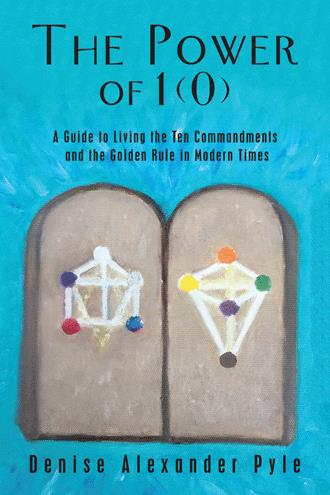 I AM. These are the two most powerful words we can recite. They remind us that we are both the creation of the God or the Universe and that we are also creators of our own lives.

I am the Lord Your God. I have delivered you from slavery. Who is the Lord?   The Lord is the One and the All. This was the first commandment bestowed after God’s miraculous creative powers were demonstrated when the Israelites were delivered out of the house of Egypt and the bondage of slavery. Look all around you and within yourself. You were divinely created from the raw ingredients that existed within the primordial soup that came forth at the first dawn of life and you still remain infinitely connected to it. We are of it and with it at the same time, yet we have trouble accepting the knowledge of this duality that we are one with God as both the creation and as creators of life. On the Tree of Life, this is the highest sephiroth, the breath of God or spark where it all begins. When you understand the first Commandment and acknowledge your connectedness with God, you can break free of the bonds holding you back from reaching your highest potential and embrace your ultimate power and learn how to live God-like in the present time.

God the Source and Abraham

Since the beginning of man’s existence there seems to be recognition of a higher or creating source, the so-called King of the Universe. You can see evidence all around the planet that most, if not all civilizations, have prayed to gods of some kind or other and they generally recognized one as most supreme.

The Greeks revered Zeus, the ancient Roman prayed to Jupiter, the Father of the Heavens and the Egyptians worshipped, Ra, the Sun God. Historically, gods were depicted in various shapes and forms including half man half animal beings or strange looking visitors from outer space and the stars and planets are represented as possessions of the gods. Then came the Old Testament and the story of Abraham and for the first time, there is acceptance of the One, the Father, (although there is evidence that Abraham’s God, was considered the God of all gods and it was centuries later before there was truly monotheistic representation of God and that monotheism more likely evolved in ancient Egypt when the country was ruled by Amenhotep IV).

From Abraham, three great religions have descended:   Judaism, Christianity and Islam. All teach the Ten Commandments in their own format with the first and foremost message:  there is only one god, the Creator.

Most Eastern religions, whether atheistic ones with no gods such as Buddhism and Taoism or polytheistic belief systems with many gods recognize a “source” for the flow of life or the “spark” of the divine. This makes perfect sense and resonates to us:  it is a Truth. Look at all of our so called “not so” primitive societies who worshipped nature and “mother” earth and whose practice are more recently embodied in modern day WICCA. They follow the cycles of the seasons of all living things in support of their own existence and draw from what they observe in their search for the right balance. Our ancestors were spiritually more enlightened but they had not reached the full potential of the evolution of their minds. They intuitively knew: the answer to everything one needs to know can be found in the nature around us. Within the matrix of the Universe there is woven a direct link with our Creator and we don’t need intermediaries to tell us what we are supposed to do. We just need to follow the right Path!

The Supreme Commander of Light

God’s very first commandment is that we recognize who and what God the one God is AND that we are truly created in his or her image. All the god-like powers that our creator possesses, we possess too and we are here to do God’s work.

We are like magicians and we only need to wave our magic wands, which we must do now in this critical point in mankind’s existence because our history has shown that we have not followed the most important commandment or guide for existence on this planet. It is time to use your gifts of light. The ultimate sin occurs when we come here but we do not fulfill the purpose in which we incarnated: to act god-like in pure love and light and both create and share, as we are both one and all. For things to be of real worth and beauty they need to emanate from the purest love and positive energy that we can bring forth from God’s light since we are also using physical or dark matter for our creation and because of its physical properties we have to make sure our creation does not take control of us.

Do not succumb to the dark side. We all walk a tightrope, zigzagging between the two worlds and we must own our god self and be vigilant and insure that we are acting god like in balance with everyone and everything.

Individually, both you and your neighbors derive your powers and therefor the responsibility for using them properly directly from God. But do you have the right to forego this heaven sent burden unless the outcome directly affects you? As you learn and understand the One and the meaning of the rest of the Commandments, it will become apparent: as God’s creation, you are now the source of your actions and they have consequences. While I don’t control you and you don’t control me, we are still connected. What is important is that you have power over your own life and are therefore responsible for whatever you chose to do.

The modern world can be a hectic, confused place. Every day we are bombarded with disparate, discordant messages about what's right and what's wrong, where we should go, what we should have, and who we should trust. But what if there was a simple way to find harmony amid the discord? What if there was a way to find guidance and direction that could help all of us make the world a better place?

In The Power of 1(0), author Denise Alexander Pyle invites us to consider the power and the promise of living by the Ten Commandments and the Golden Rule—the ten and the one—as we journey through life. Each chapter discusses and expands on one of the Ten Commandments, including a reference to the corresponding ten spheres or components on the kabbalistic tree of life. The kabbalah is an ancient mystical belief system and teaching that emanated from Judaism and reveals how the universe and our lives work. While many believe that it is the basis for Jesus's teachings in the New Testament, no matter your religious or spiritual background, The Power of 1(0) offers a pluralistic, universal message that can encourage you to pursue your true purpose and attain true joy.

Whether you worship God, Allah, the Source, the Creator, the Universe, or the Force, we are all on this journey here together. May the Ten Commandments and the Golden Rule be our guide in reaching for this unity together, all as one.

The Power of 1(0) was chosen as one of the Spirited Woman top 12 book pick lists on www.thespiritedwoman.com.

Denise Alexander Pyle is truly blessed and grateful to have had the opportunity to share the message that the power of ten is the power of one and all. In writing The Power of 1(0), she gives thanks to her one—God—and to her all—her family, friends, teachers, masters, guides, enlightened individuals, and lessons that have inspired, encouraged, and educated her along the journey. Denise currently lives in Marion, Indiana.