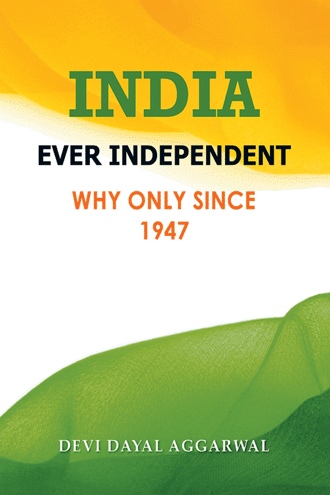 India celebrated its fiftieth year of independence in 1997. This book has been written with a view to bring out India being the oldest civilized nation of the world. It would be demeaning the country to call it only a fifty-year-old independent country when we have been independent for lacs and crores of years, except for a small period of 140 years of British regime. The Muslim rule of about six hundred years has been taken as independent period because during this period, Muslim rulers were sovereign, independent Indian rulers rather than under any foreign power. And most of the kings were born and brought up in India and imbibed with “Bhartiyata.” It was the British who ruled India as a colony only, bracketing us with the newly found lands of America, Africa, and Australia; whereas, we had been the most advanced, most educated, and richest country of the world in the past, particularly during the Maurya, Gupta, and Mughal periods. Tracing the concept of independent India, this book has taken the shape of India’s full history, with specific reference to the theme of independence through ages, since vedas.

Hailing from Haryana (India), the Author Mr. Devi Dayal Aggarwal was born in 1933. He did his schooling from Sonepat and had further education from Delhi. Having been recruited through I.A.S. & Allied Services Competition, he retired as Joint Secretary from the Ministry of Railways in 1994. After retirement, he started writing books as a pastime and has already written many books including: 1. Protocol in Sri Ramcharit Manas (in English and Hindi)- 2. Protocol in Srimad Bhagwat (in English and Hindi)- 3. Protocol in Mahabharata (in English and Hindi)- 4. Upanishadas, the Real Truth. 5. India Ever Independent, why only 50 years. 6. Jurisprudence in India through Ages. 7. State and District Administration in India. 8. Karma, Dharma and Maditation 9. Karma, Dharma and Maditation (by Babloa Press, U.S.A.) 10. Bharat Mein Shashan Pranali (in Hindi) 11. CBI and Policing in India since Vedic Period (in English and Hindi)- The present book ‘India Ever Independent why since 1947 only’ is the latest addition in the series. Besides, he has also written poems in Hindi and has a collection of about 2000 poems.