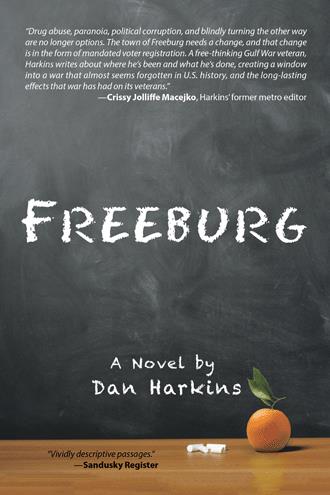 WHEREAS, on this [25th day of May, REDACTED], Freeburg’s voters will be called to ease their clutch on reins that have for too long steered our liberty toward apathy and fear. By doing so, we hope to forge a truly democratic path that aims us closer to society of, by and for all people, for which (almost; see Addendum A) every voice will be accounted, inclined to speak, and finally heard.

Everyone besides the corpse was voting suicide. Even those who'd only caught the gist on backyard breezes — him lying there all zapped on standard-issue VA meds, the wrists cut deep and sure, the frozen grin that spoke of sinful, painless satisfaction — even they just had to share their truth of how these things will often go: “Oh son, sometimes the end comes long before the heart is ready to believe.” Of course. Of course, those privy to particulars, the little things that scream and stink, had no better explanation. All that loony talk of being watched just sealed their shame and his disgrace. Silly to think, the stares all said. Look at the facts, the smile. I did. The facts can lie or hide and do. For knowing that, at least remembering I'd known it once and should again, I’ll take with pride not just the credit but the blame. My father can't.

Investigators press-released the news a few weeks into knowing all along: The coroner, with work to do and news to make that had to do with lives that didn't want to end, could see no other way. The paper was respectful, “his” paper; he “sadly took his life at home,” the new obituary writer wrote of his/her/its veteran predecessor in the notice buried deep and gray without a mugshot in the mass grave of the day’s departed. The slip into subjective might have earned him/her/it a dismissive rebuke by red-penning ("SAYS WHO IT WAS SAD?!"), but it's just as likely no one even bothered to notice. Until now. Who could have known the mistake would become almost prophetic, a blind pass by a soul mate we're not ready yet to meet? I speak now, of course, in the presence of future angels, but at the time even I had no choice but to nod in agreement with every round of clichéd condolences, every histrionic gaze down at the floor, that, without peer, without question, my old man was, above anything else, one illuminating idiot of a know-it-all whack-job, one who'd grown so untrusting that he couldn't even trust himself. I should know. I'd lived there, too.

Seven years had passed. That much dust. But still he hadn't thought in that dismantled brain of his to leave the house where all his living kin – just me, my Mom, and now-famous sister — had left him to stew in the rou of his (out)rage, which, with equal parts failure and hygienic neglect, in no time had steeped to reek like all those corpses he'd buried in unreadable words. How couldn’t he have killed himself? That’s all anyone was trying to say. Oh, fine: I'd thought it, too: He must have done it: It's what I would have done: It's what I almost did: The hero-wuss had left behind a testament without a will: He'd die a mystery that stank of myth. I'd never loathed him more completely or blamed him for more. Such was the bleakness of my own expectations.

I even volunteered to throw the rest of him away.

My mother wouldn’t do it, though I suspect she'd really wanted to and still was living close, a town away in creepy-cozy Cassadaga. It's a haven there made just so to suit her demon-swirling ilk, its portent quaint yet concentrated, supermarket-style. In nearly every creaky house can still be found a psychic with a blog and Twitter feed who's stirring souls and selling dreams. My mother's built a healthy living there. She put two children through college with the proceeds and now is sought for counsel by her peers, some barrel-bellied detectives, the occasional cold-case cable show, and a growing number of Botox experiments from my sister's set. (You'd know them if I named them, but you shouldn't, so I won't.)

Though few who know her would deny that my mother has evolved beyond the mere side-show mindfuckery of her occupation's roots, and while her aims may in fact be wholly empathetic and often eerily insightful, these types of accolades will never apply to this type of historical endeavor, not even for the yellowist of unofficial biographies. Nevertheless, with my father's unplanned-for posthumous acclaim, which she'd prefer to call his "infamy", it’s been my mother's word and none other’s on his “cracked egg of a rotten life" (December 2017, www.accidentalfame.com).

No historian, much less one with feelings for the subject like myself, could ever swallow a story that steeped in sour grapes; in fact, among the 64.7 percent of U.S. adults (+-0.02 percent) who recently voiced their wish to send my father off with something more than the middle finger, a mere 0.23 percent (+-0.0079 percent) have ever had anything to do with chronicling, teaching or even predicting official history. That means my family gets to make it.

Excuse the poetics of my writer-for-hire, but it's clear enough by now to be conventional wisdom and thereby subject to whimsy that the base of my father's life grew to become much broader than only his basest of ways, sprouting from notice in a cloud of fecund stank to become more aware of the weight of the world than most. My mother, who prefers to describe this metamorphosis as "bacterial," has one theory as to its origin: "the lucky fucker factor" (http://mediumlegends.com).

Maybe; maybe not. She frames the world in light or darkness, rarely both, and certainly not both at once, and I suspect it cuts for her the profile that her clients keep coming with their checkbooks to expect, but the gray between is really where we live our lives and die. And so with awe I hold the People’s gift to shed a more revealing light across both sides and deep within the gnarly roots of this long-beleaguered family tree. How else to fertilize and bring to bloom the only seed my father ever planted as a man outside my mother, the one he left for me to find? But smile, you cliff-hung legions only hungry for escape. The bulk of this true tale is muddied up by silly, tragic, sad mistakes, from which my father never thought a weed much less this whole new breed of tree would grow and grow to shade us all.

Freeburg details how a sick and tired city in Florida became the first in America to institute the universal mandate to vote. A young history teacher named Saul McGinty is prematurely disillusioned by the darkest moments in his own nation’s history – and his own. As he finds himself speechless before his young charges, his life grinding to a lonely halt in Ohio, he’s called back to Freeburg to clean up his childhood home after the apparent suicide of his estranged father, a wounded and whacked-out veteran of the first Gulf War, who’s left behind clues for his son to find that point instead to a nation-changing idea that he’s purportedly been killed to squash. Though sobering, Freeburg is also a silly, studied, heartfelt, and honest depiction of some of our most embarrassing modern mistakes. It offers a seemingly simple solution to many of America’s modern woes and a path of redemption to restore its esteem in the eyes of the world.

After four years in military intelligence with the 82nd Airborne Division during the first Gulf War and another four years earning a bachelor’s degree in journalism from the University of South Florida, Dan Harkins spent more than two decades writing stories for a variety of publications, from the “St. Petersburg Times” to the alt-weekly “Cleveland Scene.” This is his first novel.