The Inventor in You

A Step-by-Step Guide to Your First Invention 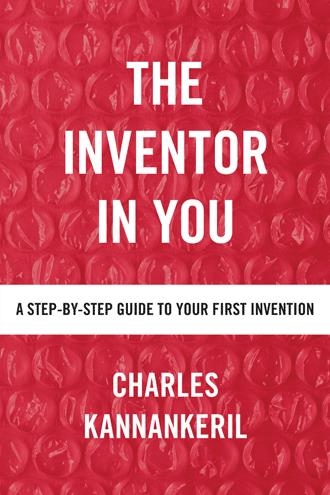 Chances are, you will invent something in your lifetime. We all have some hidden talent for solving problems, coming up with better solutions, or creating something new. Some of us may be better at these things than others, but all you need to do to invent something is identify that talent, nurture it, and learn how to use it more effectively. Like any other ability, the more you use it, the better you at get it. And, if you don’t use it, you can certainly lose it. These talents are the real tools that can lead to an invention. If you think somebody like you could never invent something, you are wrong. You do not have to be a genius, or even a scientist, to be an inventor. Many important inventions were created by ordinary people like you. There are plenty of things waiting to be created in our everyday lives. How many times do you hear people say, “I wish there was a better way to do this?” In most cases, this gives you the reason or the need for an invention. It may be the right opportunity for you to start thinking about coming up with a solution. Most of us just say this and do nothing about it, believing that we do not have what it takes to solve the problem. We are not necessarily talking about designing a rocket ship. In fact, inventing a better product can be as simple as modifying an object that you handle every day to your liking. As a consumer, you may know more about the uses of that object than the person who designed it. Many inventions were the result of making small changes to commonplace tools or items. Not all of these design changes are necessarily the work of the manufacturing designers. Many suggestions came from consumers just like you. When you are not happy with a tool or consumer good that you are using, you may come up with an improvement without even realizing it. Unfortunately, only a small number of people take that idea seriously and decide to take the next step. Throughout my life, I have heard many people say, “I had a good idea once,” but they never did anything about it. Some common excuses or reasons for not acting on that idea include: “somebody else probably thought of it before,” and “it will never work,” and “it sounds silly,” and “I don’t have the time or money to go through with it.” The same people may regret not acting when they see their idea coming to market years later. Just having an idea in your mind is not enough; you have to have a strong desire to invent something. You need to follow it through until the end and make it happen. Remember, not all ideas will come to fruition, but you will never know until you try. Your invention may be for an idea for a new product, a new process, or even a new use for something that already exists. The idea could be something simple, like folding a piece of paper differently to create a new, unique, or useful shape. It might be doing something differently to make a process easier, faster or better; or discovering a new use for an existing product. Be creative with your ideas. Your invention may be a new toy or a game that brings joy to children, a machine that makes an everyday process easier, a medicine or a cure for a disease, a computer program that launches a satellite, or something significant that makes our lives more comfortable, better, and brighter. The end result could vary from something that makes subtle changes in our life to something revolutionary that can change the world.

Charles Kannankeril, an inventor with seventy patents, draws on his years of experience in creating innovative and useful products to help you bring your own ideas to life. Whenever someone says, “I wish there were a better way to do this,” then you have an opportunity for an invention. All you need to do is identify a solution, make it a reality, and then promote your method. The more you cultivate these abilities, the better you’ll become at inventing. With this guide to inventing, you’ll learn how to: · identify areas where an invention could solve a problem; · develop the mindset, motivation, and determination to develop inventions; · navigate cost factors in the invention process; and · improve upon inventions that already exist. Kannankeril also emphasizes how important it is to believe you have what it takes to solve problems. Many inventors make great contributions simply by modifying objects that they handle every day to their liking. Filled with stories from the author’s own experiences as an inventor, this practical and entertaining guide to inventing explores how an inventor’s mind works and how to find The Inventor in You.