Letters from the Box in the Attic

A Story of Courage, Survival and Love 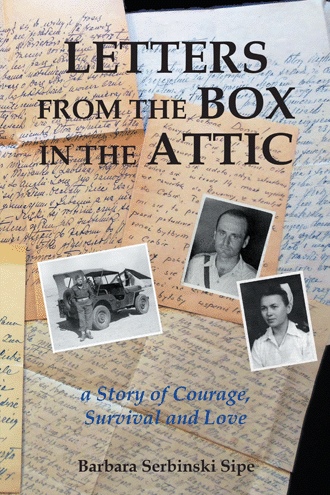 Chapter 3 Dealing With Her Past While mom was living in a nursing home in Illinois, Andy and I decided that it was time to sell her house in Pennsylvania and deal with her possessions that she accumulated over a lifetime. So much of what was in her house proved to be either in disrepair, or have no real value to worry about. Andy insisted that he did not want anything out of the house. Just about all of the artwork in Mom’s house was from Andy’s portfolio from his college days at Pratt Institute in Brooklyn, but he did not want any of it. So knowing this, my daughter Stephanie and I drove to Sewickley Pennsylvania, mom’s picturesque town along the Ohio River where I grew up. We pulled a small trailer, ready to deal with and take away what we needed to keep from the house. Mom was a saver; not to be confused with a hoarder, however. If there was the possibility that something could be reused, she kept it. If there was anything sentimental, she kept it. There was stuff everywhere! Mom’s living room was full of newspaper clippings, books and magazines, pretty much as she had left it the year before. She saved all things that represented family or a connection to her past. My daughter and I found ourselves looking through everything, piece by piece, and found many old bound calendars and day timers filled with mom’s journaling; her written commentary about her life and life in general, covering every page. She never wasted any piece of paper while writing about this or that. Stephanie and I each spent hours poring over stacks of materials, laughing and crying over what Grandma had saved and written. The journal entries in those day timers included hundreds of anonymous and quotable sayings; sayings believed in or simply aspired to live by, as well as entries telling her World War II story. That story I heard growing up over and over again. I knew she had formally documented her experience two decades earlier, a dictated formal version of her story, which was transcribed. She sent both me and my brother a copy of it in the late 1980’s. I put my copy into a drawer for safe keeping, never reading it until much later, because after all I had heard it, in bits and pieces all my life. What I found that day, going through all her belonging, was that her journal entries were in raw form, her rough drafts of the document before dictation. These drafts were unfiltered and priceless. Stephanie and I continued to look through the photos both loose and in albums, books and other recently saved memorabilia, deciding what we wanted to bring back with us. We then tackled the kitchen, dining room and her personal bedroom items and clothes. The kitchen, as small as it was, contained scads of paraphernalia as well, including small appliances, pots and pans that she had not used in years. Mom had no longer used the old Amana gas oven range, which was original with the house in 1963 the year my parents bought it. She used only one burner and never used the oven for fear of blowing up the house. The rest of her cooking was done in the little microwave or toaster oven, which Andy bought her years prior. Stephanie laid claim to all of Uncle Andy’s art work, while I decided to keep some of her china pieces and a particular curio cabinet, as well as her old treadle Singer sewing machine. That sewing machine was the life blood of mom’s sewing business and it gave her many years of use, even after she was given a brand new machine one year for Christmas. The new machine would break down periodically, but her mending and other sewing for others needed to continue. While the new one was in repair, she had to go back to using the treadle machine because it was reliable. Stephanie wanted the bench from mom’s bedroom, where my dad used to lay out his clothes at night, and a couple of random side tables. All of her furniture was original from the time I remember living in that house, which they bought on credit. Since my dad died, mom spent the rest of her life saving money, working as a re-weaver, which today is the lost art of repairing holes in wool and cotton, primarily from cigarette burns and moths. Every season mom would say, “Thank goodness for the moths; they keep me in business.” She taught herself the art of re-weaving which paid pretty well and her skills were in demand. The cottage business she started was supplemented by her mending and sewing skills. Before Stephanie and I left that weekend, I went up to the attic which had been neatly organized over the years. I was drawn up there, somewhat as an afterthought, because Stephanie and I really needed to get on the road to drive home. Once up there I knew there was something I needed to find. We stumbled on additional clothes which we added to all the bags ready to give away. I began to open some of the cardboard storage boxes and there they were, the two boxes of precious memorabilia that mom kept. I knew she kept letters and documents from the war because she would often refer to some of the keepsakes, handwritten letters, documents, medals, photographs and books. Those two boxes were full of precious items that needed to be in my custody, since I could not possibly abandon or discard them. To this day I can’t fathom how I almost left without mom’s treasures from her past. They represented who she was. Had I abandoned these boxes, it would have been like throwing away pieces of her life, her youth, her heart and soul -- saved for more than 70 years. In good time I would explore the contents.

Eleven years of events can have a profound effect on an entire lifetime. The story of Stanisława Emilia (Emma) Krasowska Serbinski is told by her daughter, Barbara, tracing her mother's courageous and terrifying journey from the Soviet invasion of Poland, through Soviet prisons and her eventual release from a Siberian labor camp. The perilous journey continues through the deserts of the Middle East, Italy, and then eventually landing on the shores of Great Britain only to receive tragic information. The project, Letters from the Box in the Attic, a Story of Courage, Survival and Love is factually based on letters, documents and photographs discovered in her mother's attic. These letters represented the fabric and soul of a life well lived.

Historical perspective is preserved when placing her mother's letters and experiences into this narrative. Barbara Serbinski Sipe is a first generation Polish American from a refugee resettlement in Great Britain. Hearing stories growing up in an immigrant family ignited Barbara's love for history. Her personal memories are recounted throughout the book sharing images of love, sacrifice, conflict and gratitude.

Understanding why things happen and how they affect life are just as important as the events themselves. It is through historical accuracy and personal introspection that enable the stories to be told in this book.

Survival is the human spirit which came out of some of the most tragic events of World War II. What tragedies and suffering life brings profoundly affects a life forever.

Barbara Serbinski Sipe is a first generation Polish immigrant from a refugee resettlement camp in Great Britain. She grew up with a passion for history when it came to World War II, specially the European conflict. Ignited by this love, “Letters from the Box in the Attic, a Story of Courage, Survival and Love” was born. Barbara tells the story of her mother’s journey from Poland to the United States.