The Tale of the Himalayan Yogis 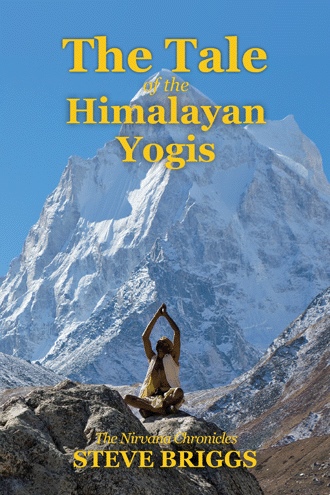 “How fortunate you are to be exploring the depths of your soul,” said Shankar Baba. “I have you to thank,” replied Govinda as he followed the yogi up the mountain. “None can teach what the soul discovers on its journeys to the realms of spirit. To know the timeless truths, you need only go within and listen.” They had not gone far when Shankar Baba stopped to watch a migrating flock of black-necked cranes. The graceful birds soared high above the valley, their long, slender necks of a darker hue than their bodies. “The cranes are heading south again. There must be thousands in the flock,” said Govinda, having observed their migrations in the past. “Even the young ones make the journey, but some won’t survive.” “Why is that?” “The headwinds are strong… the air bitter cold. Often, the entire flock must turn back only to begin the journey again.” “It seems unfair that such gentle creatures must suffer to survive,” lamented Govinda. “For the Buddhist, the crane is a symbol of wisdom and herald of good fortune. The crane may live for a hundred years, often forming a long-lasting bond with its mate. Over the course of its life, the crane learns both resolve and self-sacrifice.” Govinda winced as a pair of golden eagles approached the flock. “The eagles will single out a weak one,” said Shankar Baba. Winging near to the flock, the eagles searched for a young bird, or perhaps an old one. Spotting a fledgling, they attacked. The young crane, already fatigued from its struggle with the headwinds, found itself in a more immediate battle for survival. Diving beneath its pursuer, the crane inadvertently separated itself from the flock. The second eagle struck swiftly. Locking onto the young crane’s back with its talons, the eagle struggled with its catch as the birds spiraled down in a flurry of feathers. Seeing her fledgling, the mother crane dove at the attacker, but the other eagle cut her off. There was little the mother could do, but still, she fought fiercely. “It’s painful to watch,” said Govinda, looking away. “Why is death painful?” “It’s unjust.” “Can one know what is unjust without knowing the history of the soul?” asked Shankar Baba. “Isn’t it enough that the cranes must battle wind and cold?” “Observe what happens next.” Govinda had given up on the young crane when the eagle inexplicably lost its stranglehold on the bird. Exhausted, but uninjured, the crane rejoined the flock. The second eagle, seeing its meal escaping, veered away from the mother bird to pursue its prey. As the eagle approached the young one, the mother struck with her sharp, serrated bill, forcing the eagle off course long enough to save her infant. “Now you understand why men live with fear,” explained Shankar Baba. “Before getting a human body, the soul emerges from lower incarnations where death may strike at any moment. It’s not easy to overcome fear, but it is essential if one is to attain liberation. “Nothing exists in excess. Everything is weighed and measured according to our soul’s development. Only when the lessons are learned does one have the opportunity for a higher birth. No action is wholly meritorious or wicked. In all acts, there is some of each. The eagle must have its meal. Do not lament death, for with death comes progress.” “But it hurts to see an innocent creature die.” “There is a benefit in changing forms. For most souls, to have one body forever would be like reading a single book and assuming you understand all of literature. The soul learns by taking various bodies with which to evolve. Every man has mountains of karma, but we only carry a small parcel of it with us. One’s karma determines when it is time to depart.” “Even when an infant dies?” “In every case, the soul has done what it came to do.” “But will its mother understand?” “The world is an ashram, my son. We learn from experience. A man lives until his bag of karma is exhausted… then the soul departs.” “How does one ever overcome his karma?” “Misguided actions are absolved by meritorious ones. Karma may appear to be a cruel teacher, but such is not the case. Karma is no more malicious than a summer breeze. Karma is self-made… the doer must one day face his creations. The mahatma has faced his karma and overcome it.” “But saints fall ill,” observed Govinda. “The mahatma’s flesh is not what I speak of. I speak of the God-Self that is the saint, not the house he inhabits. Identify with your essence. What we see with our eyes may deceive us, but the inner eye is not deceived. It is easy to give way to unhappiness, but repeated shocks to the heart are like an earthquake shaking a building. Eventually, the foundation cracks.” “Nothing ever bothered the lamas,” said Govinda. “When Jinpa died, I was the only one who was upset.” “When anger… or sorrow… or fear fills the heart; those feelings are stamped on the flesh of the body, which may one day result in disease.” “Then I am destined to be an invalid,” laughed Govinda. “The seeds of disease and immortality lie deep within the mind. It’s our choice what we nurture.” “But I have been meditating all these years, and still I become angry, and also sad.” “Examine your mind. The yogi gains mastery over the mind through deep meditation, and by holding a mirror up to his thoughts. Every emotion has its opposite. Anger is the antithesis of calmness, sorrow the opposite of joy. Where you find impatience, you will also find equanimity. Some things you will approve of; others you may shun. The mind contains all these things.” “The lamas understood the mind,” said Govinda. “I should have paid closer attention to the Buddha’s teachings.” “The yogi follows his inner voice. One day, you will hear that voice… then my work will be done.”

Govinda’s father, ruler of a small fortress kingdom at the edge of the Great Indian Desert, leads his men in a desperate attack against the besieging forces of the imperial army. Upon receiving word of his father’s death, Govinda is to lead his people into the sacrificial fire to avoid being ravaged by their cruel conquerors. However, Govinda has a plan. When Govinda’s plan goes awry, the emperor imprisons his mother in the palace harem, and the crown prince is forced to flee to Tibet with a caravan of lamas. At the foot of Tibet’s most sacred mountain, Govinda meets a Himalayan yogi who adopts him as a son. With the help of the enigmatic Shankar Baba, Govinda begins to unravel the mysteries of his soul, discovering a past extending beyond this life and a future promising a noble partner who helps him restore the throne to its rightful heir. As the seasons pass, Shankar Baba initiates Govinda into the secrets of enlightenment and immortality while preparing him to confront the imperial army, sinister forces controlling the throne, and a tantric sorcerer who seeks to discredit his guru. But no amount of training can prepare Govinda for what awaits him.

As a teenager, Steve Briggs met his guru at a meditation retreat in the Swiss Alps. After studying English Literature at the University of Arizona on an athletic scholarship, the author received a Ph.D. in Vedic Studies and traveled internationally instructing thousands in the art of meditation. Sent to India by his guru, the author embarked on a seven-year odyssey taking him from Cape Comorin in the south to the high Tibetan plateau. Along the way, he initiated India’s government and corporate leaders into meditation, encountered saints and sadhus, and astrologers and artists. He sipped yak butter tea with lamas at windswept Tibetan monasteries and hiked the paths of Vedic India’s time-honored pilgrimages. As the guest of a Maharaja, he shared the fervor of thirty-million pilgrims at the Maha Kumbha Mela, the world’s largest religious festival. The author’s first book, India: Mirror of Truth, A Seven Year Pilgrimage, was a popular memoir about his time in India. Steve is now working on the second book of The Nirvana Chronicles. You can contact the author at sbriggs108@yahoo.com