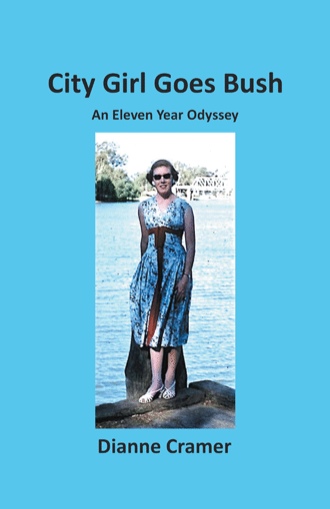 The door of the DC3 opened and I walked out onto the steps. The heat struck like a blow after the air-conditioned cabin. Dark red dirt confronted me. Then a man and two small children appeared out of the mirage as I descended the steps. This was my new boss, Dick Holt from Evelyn Downs, holding the hands of Louise, eight, and Ross, three. I was to be Louise’s governess, to supervise her Correspondence Course lessons mailed from Adelaide. It was a Saturday in April 1955. Both children wore green cotton fly-veils to protect their eyes, noses and mouths from the ever-present flies, which were a hazard to small children and adults alike. Yes, it was hot. I was the only passenger to alight, followed by the mailbags and freight, before the plane took off for Alice Springs. I left Adelaide Airport in the early morning and, with a stopover at Leigh Creek, took about five hours to reach Oodnadatta.

City Girl Goes Bush: An Eleven Year Odyssey tells the story of a young girl whose deepest desire was to live in Central Australia on an outback station, which she did from early 1955 until the end of 1965.

Dianne Cramer tells her story of two governess years in both South Australia and Northern Territory, then as the wife of a contractor on both a sheep station and cattle station, and finally as the Missus on a huge cattle station. The story documents the trials and triumphs of life in the bush where experiences were shared and appreciated by the people of the area. After leaving the bush Dianne lived on various cattle properties in South Australia and Victoria, until her husband’s retirement where they built a mud-brick house in Central Victoria. Dianne lives there to this day.