Fifty Years of Silence No More

A Journal by Bob Jacobs, a Middle-Aged Medium, Describing His Unbelievably True Life Story, and His Journey with God, Heaven, and Spirit. 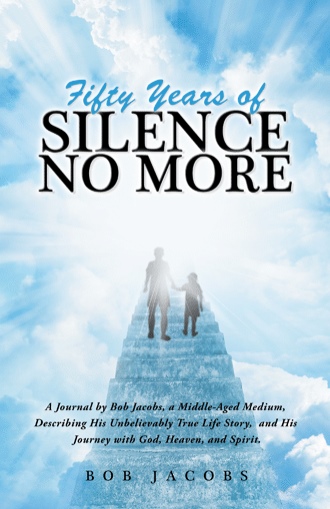 While asleep that night on October 27, I found myself in an unfamiliar place. I looked up from the ground and saw Wilma. I said, “Well hello Wilma, what are you doing here?” At the same time, I realized something very odd was going on, and it seemed like time stood still. It seemed as if I were in a different time and space. I gained so much information in what seemed like the blink of an eye. As I looked at Wilma, she sent me messages without speaking. She spoke to me telepathically. She wanted her four daughters to know that she was alright. She had a small child on her lap. The child winked at me with its left eye. As it did so, a flash of light came out of its eye. At this point, I didn’t know if the child was a girl or boy. This young child though, will come up in a later chapter. Everything around me was in very vivid colors. Next, I saw Wilma by herself, laying back on a very green grassed hillside. It was beautiful. She had on a pretty red shirt and blue jean shorts. Wilma was at peace. This was the message that she was wanting passed onto her girls. As I was with Wilma, the colors were so pronounced, it was amazing. But what really blew me away was the light that I was in; it was a bright light. This light was not blinding, but a bright light that affected everything around you. It wasn’t like the Sun; it was a light that surrounded you. It went through my soul. It was like I was taking a bath or swimming in this light. That is exactly how it felt. It was amazing. At the same time as I was feeling (Notice that I said feeling. I didn’t just see this light, I felt it.) this wonderful light, there was a positive energy buzz going through my entire body. I felt this positive energy down to my core. It really seemed to be pronounced in my mind. It was so incredible, I don’t even know how to describe it so that you can understand. All I could feel and think about while all of this was going on was love, joy, happiness, and peace. I just can’t say enough about how I felt during this experience. I was feeling this, “Warming, loving, kind, gentle light”, going through my entire body and soul. At the same time, I had this unbelievable positive energy flow going through my entire body, soul, and mind. The only way that I can describe what I felt is with these words, “Unbelievable, Love, Joy, Peace, Happiness, and Positive Energy.” That doesn’t even do it justice. Take those words times one thousand and it still doesn’t make you understand what I felt. This light and energy had a presence I felt. Not just saw, but felt! 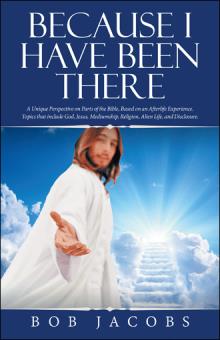 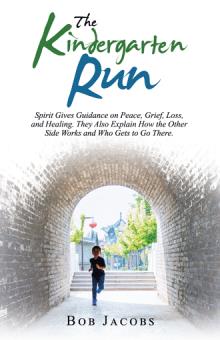 I have stood in the presence of God and the afterlife. This book explains my journey with God and how God’s presence inspired me to develop my mediumship skills. In this amazing experience, I found that the afterlife and God are all about love and understanding. God doesn’t care what color your skin is, and he doesn’t care what religion you practice. God also doesn’t care if you are gay or straight. God is an all-encompassing and understanding presence. God is love!

Bob Jacobs is a factory worker, turned medium. He has no formal education beyond High School. Bob also prides himself as being an everyday average person.