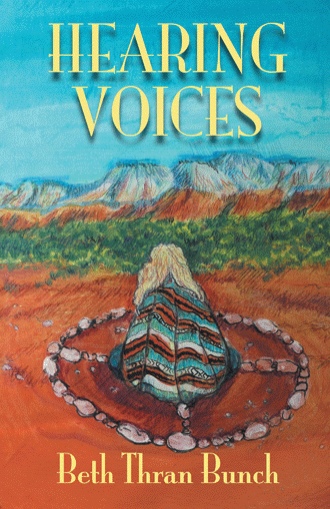 “Can you all hear me okay from where you are?” The group had seated themselves around the red rock plateau of Airport Mesa looking out over the high desert landscape. Some sat on their folded blankets, others directly on the earth. “These will be guided visualizations, so it will help to be able to hear my words clearly.” A few of them moved closer as Bill spoke. He had a small cassette recorder with him, which he turned on, creating a soft background of music with deep bass tones and drumming. Once they were settled, he began by asking them to take three long, slow deep breaths, breathing audibly to guide them. “This will help you shift your awareness inside yourself,” he explained. After having them do this, he described to them, step by step, how to get in touch with their masculine energy, including all the qualities associated with that part of them. “Imagine grounding yourselves through the center of the earth while connecting to your higher consciousness.” The words that followed combined the eastern philosophy of yang energy - light, fire, and activity with the strength of the warrior. “Feel the energy flowing through the place where you are sitting.” Then, very slowly, he guided them into a connection with this vortex, the cone-shaped energy spiraling up from the earth into their bodies. “Use all of your senses. Observe the lightness, the brightness of fire, how the sun sears through your eyelids and warms your muscles. Where in your body do you feel the heat of the masculine energy? What does the heat of the sun on the earth smell like? What do you hear?” He was silent for a time, as the sound of the wind and the rhythm of the music carried them deeper into a meditative state. “Allow the strength of the warrior to flow up from the earth into the right side of your body, which is ruled by the left brain urging you to be analytical, practical and active. You want to make decisions and act on them. Feel this strength, courage and decisiveness spread throughout your entire being. When out of balance, this masculine energy turns to aggression. Take a moment to feel what happens when you are out of balance in your masculine side, then record those feelings and your reactions in your journals.” Her father was yelling. She couldn’t hear the exact words, but she could tell they were driven by fear and she thought she knew the cause. It was her, as always. She had woken them in the middle of the night after a dream. “The red lights are coming to get us. Come on. We have to go. They’re coming to get us.” She tugged at her dad, who, not wanting his sleep disturbed, shoved her away. Her mom was alert immediately, though, and took her gently by the arms as she looked into her eyes. What she saw there prompted her to get her husband up. She scooped Hannah up in her arms and ran out of the house, the little girl urging her dad along. They stood away from the house, looking around for red lights. Her dad was furious. “What are we doing? I need my sleep. She’s just had another nightmare. Why do you insist on mollifying her? Can’t you see it just encourages her?” A loud explosion halted his tirade, knocking him into them. Grabbing his head, he whispered, “Oh my God! What just happened?” Sirens screamed in the distance minutes later. “Hannah, Allie, are you alright?” He looked at them stunned. “We’re fine. Hannah, you saved us.” She squeezed her young daughter hard, glaring at her husband. As soon as he knew they were safe, that’s when he had started yelling at her. Why was he so angry? Her mom tried to soothe him, rubbing his back, whispering. “It’s alright. We’re alright. We’re safe.” “It’s time to come back. Breathe deeply. Feel the rock supporting you as you begin to move slowly, becoming fully present in your physical bodies.” Hannah remembered that incident clearly, though she hadn’t thought of it in years. She no longer reacted to the memory the way she had before the therapist had worked with her. The last time had been in her office. As the woman had placed her hands on Hannah’s heart and throat, she had experienced the terror of that moment from her childhood as if she were living it right then. The woman’s gentle words and healing hands had coaxed her into stepping out of her body and watching the scene from outside herself. She hadn’t told Hannah it was okay, like most other therapists had done, wanting to make her to feel better. This woman had been kind enough to allow her to process the experience on another level and to then let it go so that it no longer had control over her. It had been the first time she had felt at peace with those memories of her father’s fear-driven behavior. Her relationship with her father had been so difficult at times. It had felt to her as if he hated her for saving them. She knew what he was feeling, though he would never admit it. It should have been him. He was the man, the leader. To be rescued by a little girl and his wife had been almost more than his fragile ego could bear. Fortunately, she had seen this clearly when she was old enough to understand. Her father had been living in the out of balance masculine world for so long that, even with her mom’s loving gentle attitude, it was difficult for him to change. She didn’t know what would have happened to him if it hadn’t been for her mom. He would probably have died long before he did, bottling all that anger up inside of him. Bill remained in silence as they recorded their experiences in their journals.

Hearing and seeing people’s thoughts is frightening and exhausting. To Hannah Davis, it’s more a curse than a gift. She has carried this burden for as long as she can remember, and it keeps her from forming meaningful relationships or holding on to jobs. Finding herself, once again, at a crossroads, an invitation from a stranger prompts the young woman to quit her job and head to1980s Sedona. The weeklong retreat challenges Hannah to confront her feelings about her ability. The exercises presented to Joyful Explorers’ participants trigger new psychic encounters and stir up memories and flashbacks of haunting visions. Journey with Hannah as she experiences a sweat lodge, guided visualizations, and a vision quest. Learn self-awareness techniques that you can use to find joy and a sense of inner peace in your own life.

Beth Thran Bunch’s first novel draws on some of her experiences along her spiritual path begun in the 1980’s. She began her training as a massage therapist in the late 80’s, focusing on John Barnes’ myofascial release and Upledger techniques as well as a variety of energy healing modalities. Beth is a Reiki master/teacher and BFRP (Bach Flower Registered Practitioner) currently practicing her energy healing modalities in Brevard, NC.