Intimate conversations with a family of cats on love, pregancy, birth, death and separation. 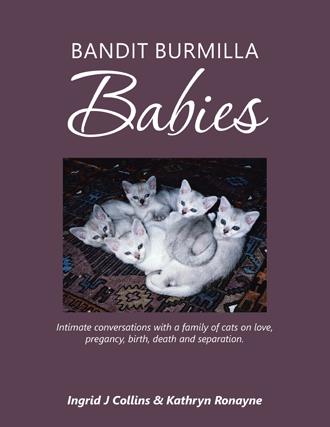 How would you feel if, when talking to your pets, you could listen to their reply? Here is a record of conversations between the authors—both of whom were trained by the celebrated animal telepath Amelia Kinkade—and their friends of other species that developed into a miraculous narrative of birth and rearing of kittens in a family of cats. Hilarious in parts and at times heart-searingly sad, you may be encouraged by the end of this book to tune in and listen to animals for yourself. “I have learned from my experience that consciousness is non-local and that through it we can communicate with our deeper wisdom with other living things. This book demonstrates how this can happen, how close the emotional life of our beloved animals is to our own, and how wise these beautiful creatures can be who share our planet.” — Bernie Siegel, MD; bestselling author of Faith, Hope & Healing and A Book of Miracles “This is such a unique and entertaining insight into the private life of animals that it would be a crime not to read it for yourself!” — Brigid Gordon, CEO, Partners in Crime Books; animal lover “This is an invitation with the permission of the cats themselves to journey into the magical world of animal communication—a rare opportunity!” — Maria Grachvogel, couturiere; cat owner

Ingrid Collins, BSc (Hons) Psych, C Psychol, C Sci, Dip Ed Psych, RIM, FSSA, FhmSTASH, CRST, and Kathryn Ronayne, BA, MA (Oxon) MPhil, ADST (Hons), FhmSTASH, are Co-Directors of the Soul Therapy Centre, a nationally accredited training clinic for healers and therapists, based in London, UK. Ingrid is a Consultant Psychologist, Chartered Scientist, Reverse Speech Consultant, Feng Shui Master, Happiness Teacher and Interpersonal Mediator at The London Medical Centre; Kathryn, a distinguished academic, is a graduate of Oxford University and the Warburg Institute and is a Hypnotherapist and Animal Communicator. Both are Consultant Soul Therapists, Registered Spiritual Healers. Because Kathryn is a particularly gifted telepath with a very pure link to her animal clients, her colleague and friend Ingrid suggested that they enter into a conversation with Tui and her son, Magic, the cats who live with her and her husband Nick, an architect, at a time when Tui was about to give birth to her final litter of kittens. In this book Ingrid & Kathryn explain how to conduct the fascinating method of interspecies communication as well as describing the process as the beautiful commentary unfolds. The photos are mainly by Mia Sampietro, also a professional animal communicator, who met Ingrid when, in her role as TV director, she and her crew were filming Ingrid at work in her clinic for a television documentary about the consultants who work in Harley Street, the London location which is the centre of excellence in healthcare, where Ingrid’s rooms in The London Medical Centre are situated. Ingrid, who appears frequently on TV, radio and in the national press, is on the Media Panel of the British Psychological Society and is the author of two books: “A Year of Spirituality: a seasonal guide to new awareness,” publ. MQP, London, UK, 2003, ISBN: 1-84072-331-9, and “Eternal Sparrow: poetry for love, laughter and life,” publ. Strategic, New York, USA, 2009, ISBN: 987-1-60860-535-4. She also has contributed a chapter in Amelia Kinkade’s book “Soulmates with Paws, Hooves and Wings,” publ. Creative Space, 2013, ISBN-10: 1482521156 & ISBN-13: 978 1482521153 Kathryn has published many papers and articles, features in Amelia Kinkade’s book, “The Language of Miracles: a celebrated psychic teaches you to talk to animals,” publ. New World Library, USA, 2006, ISBN: 1-57731-510-3, and is herself at present also writing an illustrated storybook for children. Kathryn and Ingrid share a profound love of animals and a special affinity with cats. However, whereas Ingrid and Nick have never lived with more than two at any given time, Kathryn and her husband Rick, who are both Art Historians and Qualitative Market Researchers, have at one stage shared their home with five magnificent feline companions and, at the time of writing, are reduced to only three: Sophia, Elia and Seline. Kathryn and Ingrid and their husbands live very close to each other in north London, in the green and leafy suburbs of East Finchley and Muswell Hill respectively, and regularly transform their large and comfortable homes into classrooms and clinic spaces to accommodate their students as they teach and guide them toward their qualifications as Soul Therapy Practitioners and professionally registered Spiritual Healers.