A Woman's Journey to the Rainforest in Search of Her Dreams 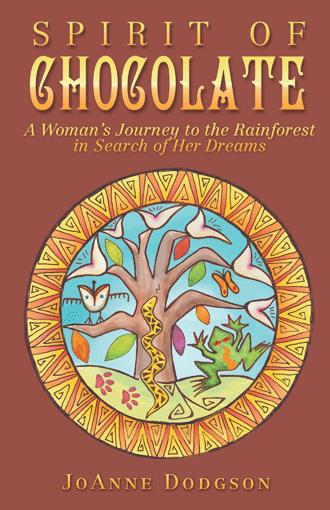 Something’s Missing I used every ounce of strength I had to push the raft upstream. River currents tugged against my legs. Gusts of wind blew me sideways. Sheets of rain blurred my vision. The thundering roar of the downpour was the only sound I could hear. My body ached with sheer exhaustion. The fear of snakes and jaguars made my stomach clench. I was terrified of getting dragged under by the turbulent waters. I stopped to catch my breath, trying to muster up enough courage to take another step. This was not at all what I had planned. This was supposed to be the adventure of a lifetime. A chance to start over. I’d left everyone and everything behind because something was missing. I thought I’d find it out here in the exotic lands of the rainforest, far away from home in unfamiliar terrain. I pushed against the river currents, trying to recall what I’d been so certain I would find. Maybe happiness? Love? A sense of belonging? But all I had to show for my sacrifice and struggle was a long list of failures and a bunch of lost dreams. I pulled the raft onto the riverbank and collapsed on the ground. The wet leaves offered a comforting softness. I couldn’t hold back my grief. I didn’t even try to stop the flood of tears. There was nobody there to hide from. As the sky blazed red with the setting sun, my remaining hopes became quite singular. I simply wanted to fade away, riding the waves of disappointment into everlasting sleep. Tree of Life Ka`Kao Tree lived in the center of the rainforest. She was a magical tree, a mystical tree. She knew the languages of those who walked on the land, swam in the waters, rooted in the soil, and soared on wings. She listened to the rocks and the winds, the rivers and the rain. She lived in rhythm with the cycles of the sun and the moon, with the galaxy and all that’s beyond. She nourished and cherished the vast web of life. The love she shared had no bounds. Ka`Kao Tree watched over the changes on the earth. For many generations, the world had been spinning out of balance. Waters were poisoned. Animals and plants weren’t allowed to naturally grow. People were at war against themselves and each other. The rainforest was being cut down. Ka`Kao understood this path of destruction could continue. Or the tide could be turned and harmony restored. It was up to the people of the earth to choose. The sign Ka`Kao had been waiting for had finally come. On this night, unlike any other night that had ever been, the tree frogs did not sing. Keeper of the Fire Ka`Kao Tree called to the winds to blow blossoms from her branches and carry them all the way to the Old Woman by the River, the Keeper of the Fire. Bright golden sparks lit up the night as the shower of ka`kao blossoms fell into the flames. The Old Woman listened to the messages sent to her on the winds. The tree frogs were not singing. The Old Woman rustled through her baskets and found the pouch of tree resin. She selected one amber nugget and held it out in the palm of her hand. Her heart filled with the promise she’d made long ago with Ka`Kao. When the sign from the tree frogs indicated it was time, the Old Woman and Ka`Kao Tree would help the people of the earth reclaim what had been lost and forgotten. Even if one person fell in love with life again, a river of change would begin to flow. Even if just one person chose to live in heart-centered ways, a powerful momentum would be set in motion for creating a heart-centered world. The Old Woman dropped the amber nugget onto a smoldering coal. A sweet fragrance rose into the air, beckoning the Old Woman’s friend to join her by the fire. With sleek elegance and grace, Jaguar leapt out of the darkness and into the glow of the firelight. The Old Woman and the wildcat warmly greeted each other and sat together by the fire. The Old Woman pushed aside a heavy flat rock set in the ground near her feet. With her bare hands, she dug deeper into the soil. She uncovered the clay bowl that had been buried for safekeeping countless generations before. With tenderness and care, she lifted the ancient vessel out of the ground. She brushed away clumps of dirt to reveal the designs carved on the bowl. She traced her fingers along the symbols that described the turning of the times on the earth. Gazing into the fire, the Old Woman told Jaguar the stories he’d heard her share many times before. About the people of the earth forgetting who they really are. About the world spinning out of balance. About the sign from the tree frogs, the silence of their songs. About the seeds holding new dreams for a heart-centered world. The Old Woman pried open the sealed lid of the ancient clay bowl. She gently unfolded delicate layers of faded tapestry and lifted up the crystal that had been wrapped inside. She cradled the gemstone in her hands and reached out to show Jaguar. The crystal sparkled and glowed, catching the flickering light of the fire. The wildcat leaned in closer to examine the sacred stone. The Old Woman held in her mind’s eye a picture of Ka`Kao Tree in the center of the rainforest. Jaguar immediately understood the Old Woman’s request. With his powerful jaws, he plucked the crystal from the Old Woman’s outstretched hands. He leapt over the fire and disappeared into the dark jungle night.

Gold Winner in Visionary Fiction of the COVR Visionary Awards

This magical story will guide our way through the changing times on the earth. Let the medicines of the rainforest and the spirit of chocolate show you the way home to your heart.

JoAnne Dodgson is a healer, teacher, and ceremonial guide in the ancient medicine ways of Ka Ta See, a lineage from the Eastern Andes. JoAnne has a doctorate in Counseling Psychology with a specialty in Holistic Health. She lives in the enchanted desert mesas of New Mexico.