Book Two of the Goldfinder Series 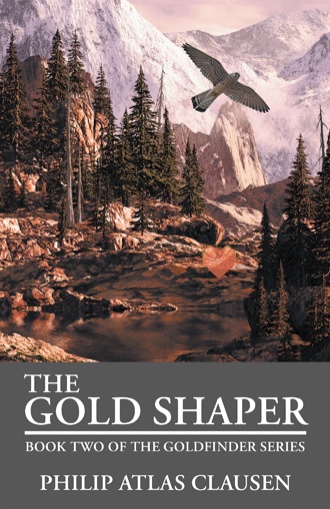 The sun went down on a rich stretch of river where three hundred men lived in a group of small shanty towns called: Indian Bar, French Bar, Rich Bar, Junction Bar, and the main attraction, New Viksburg—King’s headquarters. Petr Valory tethered Rubaiyat behind the big boulders outside of Gold Nation diggings. He was going to kill a man. He would need her speed for leaving in a hurry. He moved stealthily down the hill when, still fifty paces from the big tent, he heard a loud click and a harsh command. “Speak English or die.” The voice came out of the dark. Petr raised his hands. “You shoot unarmed men around here?” The voice said, “Keep talking and stay right there while I figure you out.” Petr said, “There’s a burned-out cabin a few miles back from here. Trouble here?” “Plenty—and you’ll live longer if you don’t try sneaking up on us. Five men were killed here last week. Two more dead at that cabin a couple weeks ago. We got Indian troubles all right—day and night. Step up where I can see you.” Petr asked, “Did you send for Army troops?” “We have our own—the Gold Regiment—all volunteers. King gives us rif les and ammunition, even uniforms.” The man stepped out of the gloom. He was a fine looking man in pale gray clothes that blended with the boulders. No doubt King was using hostilities as an excuse to beef up his militia. “That’s pretty good. I didn’t see you a bit.” Pride filled the man’s voice. “Colonel King’s smart. Each night four of us guard the points of the compass. Each hour we rotate to the next point. That Indian won’t sneak in here again.” Petr asked, “Just one Indian killing you?” “He kills with a knife or arrow—no shooting; no sound; very creepy.” The man pulled a pocket watch and glanced around. “It’s time to go now.” “Where do I find Colonel King?” “Up at the hotel. Two-story cabin with a big tent on the front, ask for King or Mack Karras. That’s his right hand man. You’re welcome especially if you can shoot. Can you shoot?” “Some.” “Better say sure when you see King. You’ll like him. He treats you like a man. All the food you want, and whiskey—and a woman once a week. Can you beat that? This regiment’s gonna grow. What’s your name, mister?” “Pete.” “Just Pete?” he laughed. “Well—we all got troubles. Get a uniform. Then you won’t get shot.” He gave a friendly half-salute and disappeared into darkness. Petr asked for his name. The man laughed again. “Call me Bill. Bill Carswell. That’ll do.” Petr stuffed his hands in his pockets and headed for the shanties. King was a strong man. What could he do, scare him? Give him a stern talking to? King killed John Valory in cold blood, so now you’ve got the guts to shoot him dead? He had killed a grizzly bear with a knife, but it had made him sick. Some men were killing men. He wasn’t one of them. His stomach churned—a good strong case of the yellowbelly. But one thing was still true. Do nothing and you won’t sleep for the rest of your life. Despite what Jack said, despite that he knew it was wrong. It would be unnatural to do nothing. If you killed a grizzly, why not kill a man? Maybe if you had the bear-killing knife it would help you remember how. So where was the bear-killing knife? Papa said he had brought the bear to Gold Nation and sold it. Petr knew the layout of the string of mining camps called the Gold Nation. New Viksburg was the main camp where they had delivered the lumber, where King was building his f lume. It also had a hotel-saloon, a stable and blacksmith, and oddly, a small taxidermist shack. His killing knife, an Indian knife made of razor sharp obsidian glass, had to be there, didn’t it? Nobody would throw such a beautiful weapon away. He found the shack, pounded on the door, but the animal- stuffing man wasn’t in. So where was he? Petr looked at his watch. It was after 8 P.M. The saloon was fifty yards away uphill, on a well-worn trail. Petr watched dark-faced miners troop sturdily up to the saloon while others trooped less steadily back downhill. Most wore pale gray uniforms of the Gold Regiment. Some had only the shirt or pants. All carried repeating rif les. They were definitely on high alert for trouble. A man coming downhill in a complete uniform eyed him glassily. “You won’t find Moony. He’s at the saloon on a spree. You won’t get any work out of him for three days.” He went away laughing. Petr couldn’t wait three days. If the knife was in the shop, he had to find it. He pushed the shop door open and a sour gush of chemical smell washed over him: old death; potions; sawdust. Things he didn’t want to know about. His eyes adjusted to shadowy gloom and dead things slowly appeared around the room. He found a lantern and lit it. The room was a horror show of death. Moony certainly had no skill for making animals look alive. Here was a lumpen rabbit; an emaciated squirrel; a stork-like bird with legs attached too far forward. Perhaps Moony’s early work, but if so, why display it? On the table were small knives, wires, and pliers. But no knife—and no grizzly. Moony must have finished mounting the bear and delivered it—somewhere. What now? The fumes were gagging him, he was getting dizzy. He rushed outside and gasped until the dizziness went away. Now that he looked sick, he blended right in with the men of Gold Nation. He added a rolling gait as he staggered over to the saloon. He sat on a log where he could watch for Moony. 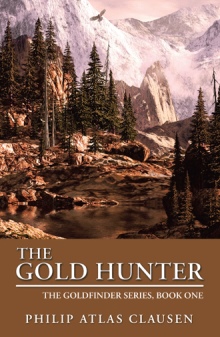 A seventeen-year-old has found a huge heart of gold hidden beneath a lake high in the Sierra Nevada. It is the mother lode. But can he keep it? Dain King is a ruthless killer who captures Petr and sends him down the river in an old Indian canoe to scare him into revealing the location of his gold. The canoe goes over a waterfall where Petr is rescued by Paiutes. He falls in love with the Indian medicine woman, Minoah. A bad Indian kidnaps Petr’s little sister and uses her to lure Dain King and his men into a trap. The Indians are killed, including Minoah’s father. Now love turns to hatred, and Petr ventures to San Francisco to make a beautiful gift, the Falcon Heart, for Minoah. There, he will remember the secrets of gold shaping. There, he will discover the terrible price of finding gold.

Philip Clausen graduated from San Jose State in 1971, with previously published novels, The Black Butterfly Woman; and The Gold Hunter