The Fairy Dragons of Rainbow Mountain 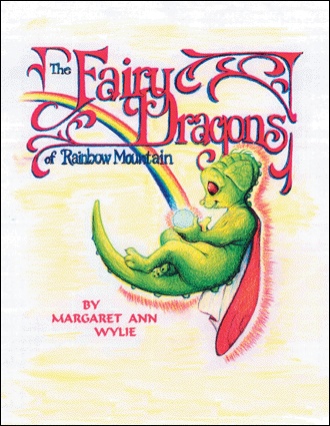 Many hundreds of years have passed since then and the long-forgotten prophecy of the Earth Mother is now about to be fulfilled. The time of the Awakening has finally arrived! The fairy dragons, so long asleep within the crystal caverns of Rainbow Mountain, stir as they feel the power of the Magic begin once again to course through their small bodies. Wings are unfurled and stretched, cobwebs are brushed from dusty scales and most importantly of all each tiny dragon begins to glow with the colour of its own life force. Some of the fairy dragons emit a warm red glow, some a vibrant orange. Some glow yellow, their bright light bouncing off the crystal walls like myriad stars, while the emerald glow of others casts an almost eerie light in the darkness of the mountain caves. The older and more experienced of the fairy dragons radiate the blue, indigo and violet shades, but one very ancient dragon shines with a brilliance that reflects every shade of the rainbow. He is Obijon, their wise and revered leader. An intense feeling of excitement ripples through the little dragons as they realise the significance of their waking. The Magic must be returning to the Earth. But how? What could be happening out there in the world of the humanfolk? Dragons mostly communicate with each other by thought but when excited they tend to speak aloud, so as each of the fairy dragons began to speak excitedly at the same time, the din within the caves became deafening. As the noise reached a crescendo in Obijon's head he called commandingly for silence. The fairy dragons grew still, eager to hear what their beloved leader had to say. “Dragons of Rainbow Mountain, hear me!" His words echoed around the large cavern in which they had all gathered. “It would seem that the Awakening has begun, which means we must organise ourselves to go forth once again into the world of humans. However it will be a very different world from the one we remember. Not only will there be the dreadful damage of the Darkness to contend with, but there are sure to be many other changes which have occurred while we have been asleep inside our mountain.” Obijon paused briefly to be sure he had their full attention. “Therefore,” he continued, “I urge you all to be extremely cautious until you establish a sound understanding of the present-day world. Each of you knows your own talents and how best to use them, so look for those situations where you can be of special service to the humanfolk, remembering to act wisely at all times. Go now, my precious dragons and know that the power of the Magic is with you always!" Obijon raised his hands in a final farewell blessing, then the excited fairy dragons hurried with great enthusiasm to the entrance of their mountain home, eager for the adventures that awaited them in a changed world.

The Fairy Dragons of Rainbow Mountain tells of a magical family of fairy dragons who have been asleep inside their Rainbow Mountain home for many, many centuries. Their awakening coincides with the return of the Magic to the earth in order to break the spell that the Darkness has held over the minds and hearts of the humanfolk for many aeons. As the fairy dragons enter a much-changed world from the one they remember, their experiences present some very interesting challenges. The most important thing to know about fairy dragons, however, is that as well as the magical powers they possess, they are also filled with love and compassion for the “humanfolk” and so are able to touch the hearts and minds of all those they encounter.

Margaret Ann Wylie is a first time author who loves to write and loves to read. At the age of seven she had an essay published in the childrens’ section of a Brisbane newspaper and her favourite gifts as a child were, and still are, books. She believes that magic lies within books and that all children should be encouraged to discover this.

Margaret lives on a small rural property in southern New South Wales, Australia, with her partner Peter, her two horses and her dog, Jaz. She holds a Diploma in Applied Holistic Counselling and enjoys working with her clients on all aspects of their Being. The Fairy Dragons of Rainbow Mountain reflects Margaret’s whole-hearted commitment to the Earth Mother and to the healing of our beautiful planet Earth, as well as to the healing of the “humanfolk”.