Angharad Ashleigh Meg and the Hole in the Ground 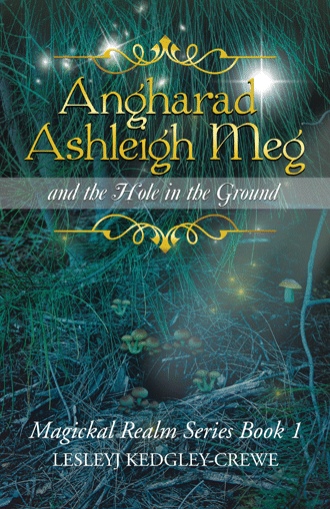 How did the adventure start? Well, like this. We were sitting on the edge of the Hole with our legs dangling. We were already small. All was quiet and very dark. It was a bit spooky. ‘Amee, Adie, I think that this hole is a slide!’ said Callum in low tones. ‘What?’ Adie and I leaned over the edge and felt the way down. Callum was right! The way down did seem to be made of some kind of metal. ‘“Illuminate!”’ muttered Adie waving her index finger. For a brief moment, a bright light flashed from the end of her finger and illuminated the hole. ‘Feel it! It is a giant slide! See how it curves around! This is cool and it should be so much fun!’ said Callum in excitement. ‘Let’s go down!’ ‘Hang on!’ I said. ‘We need to be a bit careful, Callum. What if we slide right down into a group of Trolls or Gnomes? They might not appreciate it.’ ‘Oh. Oh yeah. That might not be good.’ ‘We should be okay’ said Adie with a slight frown. ‘The music definitely didn’t sound like Trolls or Gnomes. It definitely sounded like Fairies.’ ‘Nevertheless’ I objected. ‘They still might not like us just sliding in on top of them.’ ‘Oh come on, Twins! Isn’t a Witch’s Magick stronger than a Fairy’s? We’re not going to have any fun at all if you worry about every little thing!’ That was so true that we took off. First Adie, then Callum and then me at the rear. The slide was very very twisty and very very fast! It was also very very dark and the deeper we went, it got very very cold! After sliding around corner after corner in the pitch dark, we saw a faint light appearing. We were obviously getting towards the end of the slide ride. Sure enough, I suddenly shot off the end of the slide and landed on a large pile of cushions. I was getting to my feet when I caught sight of something standing nearby. I say something rather than someone because I had never seen anything like whatever it was before. Callum and Adie were already on their feet and the thing was obviously waiting for me to join them so I untangled myself from the cushions, stood up and walked over to them. ‘Are there any more of you?’ the creature asked in a very squeaky voice. ‘Er, no. Just us three.’ I was the only one to answer. Callum and Adie seemed to have lost their voices. ‘Good. Well, come with me – you have a lot of explaining to do.’ The creature turned and walked down a long hallway. It was lit with what appeared to be floating lights. Not really knowing what else to do, we followed it. I walked up close to my Twin. ‘Adie, that’s not a Fairy is it?’ I whispered to her. ‘No. I don’t know what it is. It’s not a Troll or a Gnome, though.’ ‘No chattering’ said the creature, sternly so we fell silent. We walked for quite a long way. The tunnel seemed to be never ending. There were no other creatures to be seen but every now and then, we did see a worm poking its head out of the soil of the walls. It was very weird being this little. The worms seemed like great anaconda snakes and once, a beetle raced past us. It seemed as big as a car. The long hallway ended in a blaze of lights. We were in what appeared to be the centre of a small village. There were houses and shops and lots of streets all leading off from the main street we were standing in. ‘Wait here’ the creature said to us. ‘I must alert the Royal House that I have captured three intruders.’ 'We’re not intruders!’ began Callum indignantly but the creature was hurrying away and didn’t hear him. ‘Well, technically, I suppose we are intruders’ I said. ‘Well, yes, but, we’re not dangerous intruders!’ ‘But they don’t know that’ I pointed out. ‘Shh! Someone’s coming back!’ hissed Adie. We waited in silence. For some reason, it hadn’t occurred to any of us to try and Magick all of us out of there. We just waited for the “Royal House” to arrive. Two beautiful, winged creatures walked towards us. ‘Oh, now those are Fairies’ said Adie in relief.

This book will appeal to those young people who love magick and stories about realms other than our own. It is the story of a young girl, Angharad Ashleigh Meg, known as Amee. It took place on the eve of her eleventh birthday. She, her identical twin sister, her best friend, and one of her cousins discover a hole in the ground over the back fence of her garden. When they eventually figure out how to become small enough to go down the hole, they discover Fairyland. From there, the four of them discover the whole of Magickal Realm and many of their Magickal relatives including the Queen of the Witches and Warlocks. They all take part in the mighty battle that is fought on Cloud Minus Twenty-Three for the ruling of the Magickal Realm and the right for all Magickal folks to be free and to live on their own Clouds peacefully and happily. When the battle is over and won, the ending has a twist that will take all readers by surprise.

This Author holds several Degrees in Education and has been involved in the teaching of children and young teens for over thirty years. During that time, she has always readily supplied them with imaginary tales. She is also lucky enough to have a number of great-nieces and -nephews to whom she has also told her tales. This book is one of those stories.