Three Magic Nights of Billy and His Faithful Cat Murik 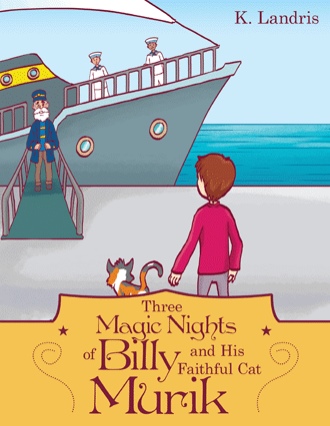 The carpet landed pretty far from the Sphinx between huge sand dunes. Nobody was around, only very far in the distance they could see people on camels next to the pyramids. “Do you know anything about quick sand?” asked Murik. “Just a little, I read somewhere that it is very dangerous” Billy responded. “Sometimes people like to exaggerate the danger”. Murik continued “It is believed that this pyramid disappeared into quicksand. This pyramid is the most magnificent of all of them; and it is still untouched because it is hidden in the sand”. Billy asked, “Then how do we get into the pyramid”? Murik said, “Only people with good intensions, not robbers, can enter. As far as I remember, there is a stone cover over the entrance”. They looked around and only one single huge stone was seen in the sand. Murik said, “That must be it”. “No way can we move that stone” said Billy. “Don’t worry, I have an idea” replied Murik. Murik moved their carpet next to the stone, and started digging under the corner of it. Billy had never seen Murik working so hard, and finally he realized what Murik was trying to accomplish. The cat wanted to place their Magic Carpet under the corner of the stone, lift it and open the entrance to the Fourth Pyramid. Billy joined Murik in the sand digging and pretty soon they were able to place the carpet under the corner of the stone. But the carpet did not move. “Now I have an idea, the carpet cannot move without us on it.” Billy placed Murik on the carpet and it lifted up a corner of the stone slowly. Murik had to use his claws to hold himself on the carpet which was bucking wildly during the lifting. Billy had to hold his laughter as he watched Murik hang on to the carpet with his claws. Finally the stone was moved enough and a deep shaft with steps appeared. Because of his fear of the darkness Billy let Murik go first and pretty soon it became very dark, although some small shimmering light was coming from beneath. Luckily Murik could see very well in the dark but Billy couldn’t see anything. The cat generously invited Billy to hold onto his fluffy tail. Knowing how sensitive Murik was about anyone even touching his tail, Billy politely declined the cat’s offer. They reached the floor and could see some light glowing far in the distance. Billy was relieved when Murik told him in the mentoring voice that “the glowing sand in front of us is a second ingredient for the Elixir. We have to go all the way down this long corridor to get a handful of sand”.

Do you want to travel with your favorite pet on the Magic Carpet to the wonders of the world? It is very easy to do so by reading this book. The book will tell you unusual stories and transport you into the adventures. Be careful; don’t stay there too long. Return home to your family, and tell them about your journey.

The authors live with their grandkids and cat Murik. All of them like to travel to the beautiful places together but if they cannot they always can imagine that they are in the most magic places on the Earth. Also sometimes grandparents are too tired to play all the games their grandkids want. Murik came to rescue and purred the story how to keep the grandparents in good shape. With this book we invite you to travel with us.