Loving the Body You Have 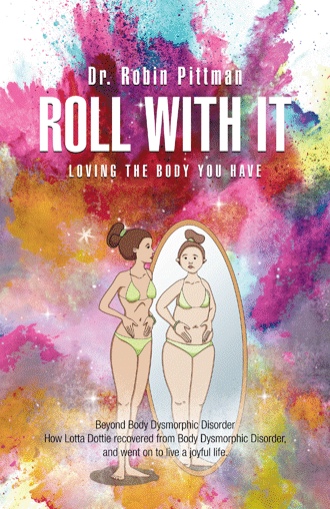 Chapter 1 Hi, I’m Dottie My name is Dottie. My friends have come to call me Lotta Dottie ever since I learned how to love my generous figure. I am 50 years old, and I have a husband and two grown daughters. I thank all of them for their love and support in helping me come to terms with my size and shape. It was my concern for the welfare of my daughters that prompted me to face my own body image issues. I want to share my journey with you; how I went from having crippling body image issues to feeling great about myself. At the beginning of my journey, I didn't think of them as issues - I just thought that I was fat. Other people would have agreed that I was overweight or fat. This journey began early, but did not take a dramatic turn until my 30s. I had two lovely daughters, and I didn’t want them to grow up with body image issues like I did. I didn’t want them to feel that they always needed to be on a diet. I got to see many other moms who were gorgeous and still fought to be better. One mom in particular stands out in my mind. She had two boys, both in their early teens. She looked like she had never been pregnant and hadn’t aged a day since she was in high school. I marveled at this for awhile. I later learned that she regularly took “vacations” to see a plastic surgeon. A little nip here, a tuck there, some liposuction, a boob job, etc. I was stunned – she was only thirty-two years old. I thought about what drastic measures she had taken, and I realized that I was not willing to go as far. With this insight, I began to wonder if anyone else viewed me as I had viewed her. Did anyone I knew think I was a little too obsessed with my appearance? Was I? Today, I realize that I absolutely was. I just didn’t resort to the same lengths as my friend. Nevertheless, I had many of the same insecurities that she did. How do we handle these insecurities? That is the question worth asking. That is what this book is about. Throughout this book, I am going to use the word fat instead of overweight. This is because overweight is a misleading term. We can see someone’s size by looking, but not their weight, and certainly not whether they are overweight. Coupled with that is the fact that how much people should weigh is hotly contested. Because of the stigma in our culture against being fat, the word overweight has become synonymous with disease. If we observe a supposedly overweight person and a supposedly ideal weight person side by side, we might assume that the overweight person has a higher percentage of body fat than the ideal weight person. However, it has been found that a larger, heavier person can have a lower percentage of body fat than the smaller person. Which one is overweight? Over what weight? You just can’t tell by looking. Once you realize that fat itself is not a disease, it becomes clear how important it is not to be afraid of talking about it. We tend to hide things we are ashamed of, and if we are nice people, we usually try not to draw attention to the shameful aspects of other people’s lives. Talking about fat openly and honestly takes it out of the dark and shameful corners and into the open where it belongs. We’re not generally ashamed of having brown eyes, being tall, or being short, so why should we be ashamed of being fat? We don’t have to be. The word overweight is associated with many prejudicial assumptions, like the idea that an overweight person eats too much, lives like a slob, isn’t smart, or doesn’t exercise. These assumptions aren’t necessarily true, but the fact that people might think they are causes a fat person to feel ashamed. This shame is why some dedicated health professionals are now reluctant to say a person is overweight. They understand how little one can affect ones weight/size. Many of them prefer to focus on encouraging healthy habits like eating good, pure food; exercising; having fun with family and friends; and generally enjoying life. At my own doctor’s office there is a chart on the wall that says Strong Healthy Bodies Come in All Shapes and Sizes. The chart recommends that we get up off of the couch and play hard for 30 to 60 minutes a day, cut TV watching back to 1 hour a day, eat five helpings of fruits and veggies, cut down on soda, and drink plenty of water. I think making fat a taboo word contributes to the shame people experience about their bodies. Fat is an adjective describing a characteristic. Just like tall and short, dark and light, young and old. It has become a bad word in our culture, but fat is not a bad thing. We need it to survive. While we can’t see whether someone is overweight, we can see fat and size, so it’s more accurate to refer to these attributes. I will use the word fat for its simplicity, and for its increasingly positive reputation within the body acceptance movement.

Follow Dottie on her Journey of discovery as she realizes she has many of the symptoms of Body Dysmorphic Disorder. Join her as she learns the way to take back her power and shares these techniques with you! Roll With It is a wonderful reference book for anyone unhappy with their appearance. It is useful for friends and family too, and can help them better understand what their loved one is going through.

Dr. Pittman has 39 years of experience working in many healing modalities, including The Transcendental Meditation Program™, Trager System of Movement Re-Education™, Educational Kinesiology™, Integrated Awareness Technique™, and Soma Pi™. She is also a Reiki Master and Teacher. She harnesses her innate intuition and empathy to better serve her clients, and she continues to do readings and consultations for clients all across the country.

She has trained as an advocate for women surviving domestic violence, and a crisis line counselor for a sexual assault clinic serving men, women and children.

As a graduate student in clinical psychology she received training providing psychotherapy to elderly men and women at an in-residence facility, giving her experience with end of life issues and dementia.

Dr. Pittman provided individual and group therapy for individuals with eating disorders such as anorexia and bulimia where she gained experience working with medical doctors, psychiatrists, and social workers on behalf of clients.