The Girlfriend’s Guide to a Mindful (and Joyful) Life 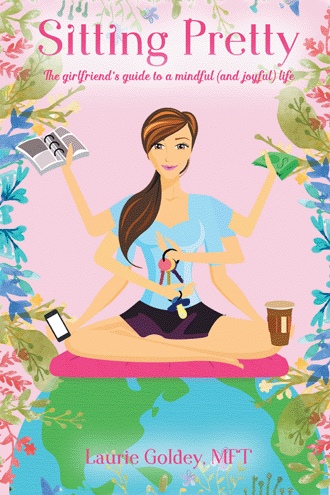 What does it take to love your life more fully, to feel more focused and productive, and to have deeper, more satisfying relationships with everyone in your life? All it takes is being more mindful and more attuned to your life and what is happening in the moment, whether you’re sipping your morning latte, helping your kid with homework, or stuck in traffic on the way to work. That’s what Marriage and Family Therapist and mindfulness practitioner Laurie Goldey discovered more than a decade ago, when, skeptically, she began taking baby steps toward living a more mindful life. What she found was, making tiny changes are all it takes to incorporate noticing into your daily routine, whatever you happen to be doing. Focusing on the task at hand (whether mundane or exceptional) can help you find joy in the most routine or habitual tasks and can bring out your best self, impacting your family, your job, and all of your relationships (especially the one with yourself). If you follow the week-by-week suggestions in this book, you will feel less overwhelmed, less anxious, less likely to spend early-morning hours in bed wide awake, ticking off your to-do list. And that’s just the start of the new life ahead of you. Before you know it, you’ll be sitting pretty.

Laurie Goldey, is a licensed Marriage and Family Therapist in Los Angeles, CA. She’s been a student and practitioner of mindfulness in her own life that she shares with her husband and teenaged son, and a teacher in her retreats and private therapy practice. Her girlfriends are her sounding board, confidants and allies and she wrote this book to acknowledge their influence and give them this gift of Sitting Pretty so that they can realize a more joyful life from being present in theirs.