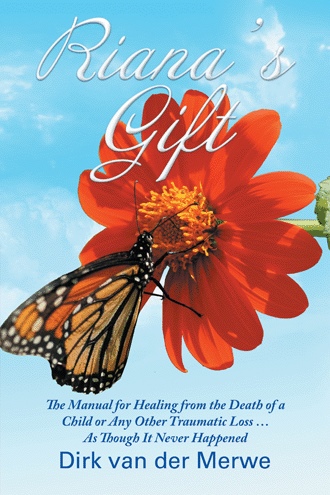 All truth passes through three stages. First, it is ridiculed. Second, it is violently opposed. Third, it is accepted as being self-evident.
Arthur Schopenhauer 1788-1860

ON 7 NOVEMBER 2005, my late wife, Elsie, and I received the call all parents fear more than they dread their own inevitable death. Riana, our firstborn, had just died. About three months earlier, Riana - a healthy, happy, successful insurance broker and mother of two daughters then aged nine and eleven - had turned thirty-seven.

The first drafts of RIANA’S GIFT focused almost exclusively on an amazing “materialisation” or a “manifestation” that Elsie and I both experienced. It could well have been called paranormal, yet it’s the undeniable truth. It happened within seconds of receiving that awful, life-changing phone call. In fact, we were still standing at the phone, completely at a loss as to what to do next, when it happened.

It’s difficult to explain a sensation or feeling. The closest I can get is: when on a warm day with no windows or doors open to cause a chilly draught, you, without any thought or action on your own part, get goose bumps. Now add to that, an eerie sensation tingling up your spine to the base of your neck where it feels as though the hairs are rising. This spooky experience is so common we even have an expression for it: “Someone has just walked over my grave.” The sensation was something of that nature, and it happened to both Elsie and me – so it couldn’t have been just her or my imagination. We physically felt that a substance, composition unknown, loosened itself from around our solar plexuses and then fell out of us. The “falling-out” sensation was over almost as soon as it‘d started. And with it, notwithstanding the intense shock, confusion and pain we were experiencing, both of us were enveloped in a deep sense of peace and acceptance.

Then, exactly three months after her departure, both of us received what we call, Riana’s GIFT, and that changed the nature of the manuscript I had started writing. Although neither Elsie nor I’d ever heard of an experience similar to the “falling-out” sensation (and later on, the GIFT), it had healed us so completely from the pain and that hollow feeling in the chest that bereavement brings. It felt as though Riana’s physical death had never happened.

The “falling-out” experience/sensation, the explanation of the word “GIFT” – an acronym, as well as the natural laws underlying the phenomena and how they can be duplicated to provide the same complete healing for whoever desires it, all are explained in the main text. Nevertheless, because the GIFT is such an unusual concept I’ll briefly explain the sensation: Remember that time the filling fell out of your molar tooth on the side you favour for chewing? The excruciating ache not only affected your tooth and mouth but also threw your whole way of life into turmoil! You couldn’t chew the way you were accustomed to and any food, such as tough meat, raw carrots, etc. that required some serious chewing suddenly became an agonising experience. Drinks taken to soothe your nerves and dispel the stress of the day caused you to scream in pain, and strung your nerves so tightly that they came within a hairsbreadth of snapping when the hot or cold liquid made contact with the exposed nerve. You couldn’t sleep for the pain and were more exhausted in the morning than you had been when you retired at night. Your every effort to lessen the pain aggravated it. You tried stuffing the tip of your tongue into the exposed hollow in the hope of relieving the agony, but this only aggravated it. Pressing on the uncovered nerve only sent another tormenting jolt of hurt through your frame. But, oh blessing of blessings, after the dentist had imparted his “gift” – talent and skill - by filling the cavity and restoring the tooth to wholeness, the pain wasn’t just better or more bearable, it was gone! And the cavity wasn’t merely repaired, it was as though the loss of the filling, and the painful hollow it left and the life-upsetting pain and suffering it’d caused had never been. A gift can't get any better than that, can it?

If you can relate to that metaphor, you are in for a life-altering, healing treat. For now, forget about the GIFT and the “falling-out” experience. Instead, read on with hope and anticipation.

RIANA’S GIFT is a first of its kind. It tackles bereavement and traumatic loss - be it divorce, retrenchment, rape or whatever else has destroyed our former life - as a temporary, although painful, interlude from which the bereaved and traumatized can be healed fully. It’s explained as part of the Master Plan for every one’s life who’s been afflicted in this awful way; meaning, what befell us didn’t happen by accident or without reason. Every one of the books I'd read, viewed on internet and had thumbed through on offer in bookstores, treats bereavement as an incurable or a terminal ‘condition’ – a lifelong sentence of pain and sorrow to endure until the day we die. At the conclusion of the book you still don't know how to put your shattered life together again as if the loss never had occurred. RIANA’S GIFT, conversely, is a manual that shows step-by-step how anyone who follows the process can recover fully from bereavement and loss as though their ordeal had never happened!

It’s based 100% on natural law. Particularly on the one that removes the memory from a mother’s mind to recover completely from the excruciating pain and horrible trauma of giving birth. Once she holds the new born in her arms, it’s as though the physical pain and near-unbearable mental and emotional ordeal never happened. If the Natural Healing Process didn’t erase the mother’s recollection of childbirth, every woman would avoid being placed in that situation again. The human race would eventually pass into oblivion if every woman produced only one child.

To compare bereavement with any kind of chronic disease or life sentence is nonsensical and insensitive. Nearly every treatise on bereavement is written from an academic perspective by a professional counsellor or therapist who hasn’t a clue about what it feels like to lose a child’s body to death and neither do they offer practical hands-on advice on how to be healed from the ordeal. Bereaved parents, who don’t know the first thing about the Natural Healing Process, write the remainder based on their experience. Although these are offered with honesty, love and sincerity, they’re personal accounts that aren’t as objective as they should be. Confirmation that there are millions of parents suffering pain like yours will not assuage or lessen your agony. In fact, it compounds the hurt by adding frustration. At the end of the book, you still don’t know how to get rid of the pain permanently! Bereaved parents or anyone who’s suffered a traumatic loss don’t want confirmation of their state of pain. They know the reality only too well. They want to be made whole again and to live as though the awful experience had never happened! Think about it this way. What comfort is there in knowing that thousands of homes were destroyed by the tornado that struck yours, if no one tells you that it is possible to rebuild your house? Worse still, if you’re told to accept life amongst the wreckage and to be grateful for sweet memories of how your home had once looked and felt.

Smile. There’s a way, a natural process that’ll restore your life to the state that existed before the “tornado of death and loss” struck your home, family, life and happiness. RIANA’S GIFT will show you how to achieve it…

In November 2005, author Dirk van der Merwe received the call every parent dreads above all others. His daughter, Riana, was dead at thirty-seven. In the shocked silence that followed, both Dirk and his late wife, Elsie, underwent an unusual experience. Some would call it paranormal—a phenomena that is physical but can’t be proven scientifically. It was a sensation so overwhelming that—notwithstanding the intense shock, pain, and confusion—it filled them with an indescribable peace and acceptance. This reaction was the exact opposite to their experience thirty-five years prior when their second baby was stillborn. The fact that Elsie experienced the same unaccountable “at peace and complete acceptance” sensation propelled Dirk into an exhaustive study of bereavement and natural law. Riana’s Gift is the result of that investigation. It dissects and rejects all standard recommendations for dealing with death and traumatic loss. It dismisses the idea that the grief and pain of bereavement in all its forms is a life sentence that must be endured and suppressed one day at a time. It is unique in providing guidelines that allow you to live on, joyfully celebrating the spirit of the person you love without anguish or guilt, as though the pain and trauma of the loss never happened while the fond memories of the individual blissfully remain. This is guaranteed by that same natural law that leaves a new mother joyously exuberant, forgetting the recent agony of childbirth. Riana’s Gift offers a hands-on manual to healing from loss and trauma with special focus on parental bereavement based on natural law.