Stories on the Road to Compassion 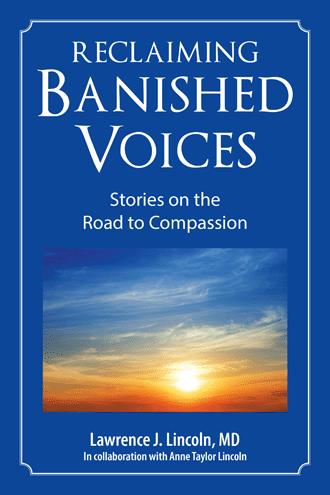 Lawrence J. Lincoln had no idea how a near-forgotten childhood event had impacted his adult relationships and busy medical career. His life changed dramatically as he gradually discovered that injured or neglected children often take revenge on the least dangerous person in their universe: themselves. As a result, we banish the most vulnerable, frightened, and tender parts of ourselves so that we are not hurt again. In Reclaiming Banished Voices, Larry fills the pages with stories and teachings that illustrate the consequences of this sabotage to our personal lives, our relationships, and society. With intellectual clarity and emotional poignancy, he also offers a technique to reclaim our full selves and live a connected and fulfilling life. Drawing on his years of leading workshops with Dr. Elisabeth Kübler-Ross, as well as his vast experience as an infectious disease and hospice clinician, Lincoln provides multiple examples of the transformative power of compassion and love. Part memoir, part treatise on the value of the externalization of emotions, and part roadmap for those searching for elusive contentment, this book will help you reclaim voices from the past, become a better parent, partner or friend, and live a fully engaged life.

Lawrence J. Lincoln, MD, has been the medical director of Tucson Medical Center Hospice for more than twenty-five years and recently retired from a clinical infectious disease practice. A graduate of Amherst College, Columbia University College of Physicians and Surgeons, he and his wife, Anne, offered the Growth and Transition Workshop program for thirty-one years. They have two children and three grandchildren. You may contact the author at rbv2018ljl@gmail.com.