Trauma and Healing on This Side of the Rainbow 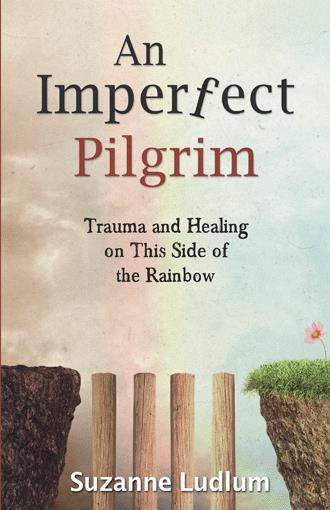 About 2 a.m. I was getting tired and asked him to take me back to the hospital. The route out of Manhattan from midtown took us through the Lincoln Tunnel into Weehawken. I wanted to show him my favorite view of the Manhattan skyline, which was particularly beautiful at night, so we took the first exit at the top of the ramp and turned right toward Hamilton Park along the Hudson River. He parked the car on the street and we walked through the park toward a fence at the top of a cliff that overlooked the river and the city beyond. We stood looking across, when he turned toward me, took my face in his hands, and leaned in to kiss me. I jumped back, startled and repelled. “What the hell are you doing?” I shouted. “I don’t want that from you!” “I know you want me. In fact, I know you better than you know yourself,” he squeaked. “That’s bullshit!” I shouted as I turned and ran toward the car, him following close behind. We drove back in silence, and when he pulled into the hospital parking lot, I quickly got out of the car and slammed the door behind me. I ran upstairs into my room and dove into bed fully clothed, pulling the covers over my head. He came to my room the next day, and nothing was mentioned of what happened the night before. I had to admit that I had grown attached to him, but having any kind of close relationship was so far from any realm of possibilities that I couldn’t bring myself to even address what he had done. I left the subject alone and hoped it would be forgotten by us both. After two weeks, I left the hospital and moved in with friends while Walter found another place to live. I could barely tolerate his presence anymore and said I wouldn’t go home until he was gone. My friends’ house was close to where Dr. Styena lived, and I could easily get there for my three-times-a-week appointments. Large quantities of medication and extreme drowsiness notwithstanding, I managed to drive myself to my next appointment. As I sat in my usual chair not offering much in the way of dialogue, I found it was getting difficult to stay awake and asked to lie down for a few minutes. I don’t remember falling asleep. I was awakened by the feeling of movement. Confused and disoriented, I didn’t initially register what was happening. But then I knew: he was pulling my clothes off. I struggled against him, but the drugs had a hold on me and I was weak. “No! No!” I tried to scream, but only whispers came through. The words were trapped inside my throat. “It will ruin everything! No! Please!” He didn’t stop. I couldn’t fight. I tried to push back against his thrusts, and when he was done, he climbed off and sat on the sofa. I slowly stood up and struggled to pull my pants back up. I moved in slow motion, trying to wrap my mind around what had just happened. As I struggled to dress, I glanced at him. Once again he had that familiar posture of slouching, head slumped, gaze down. I couldn’t believe what had just happened. In an instant, everything changed. He had finally crossed a line that was chiseled in stone, and it couldn’t be undone. Figuratively speaking, he was now naked. I should have run. I should have called the police. I should have slugged him. I should have done so many things, but the only thing I did do was feel sorry for him. “It’s okay,” I whispered to him. In my medicated state of mind, I was feeling bad that he was feeling bad. I was consoling him. Outside the realm of all sensibility, I continued to see him. I told myself that he loved me and that’s why he did what he had done that night. I even told myself that he would divorce his wife, leave his four children, and marry me. It didn’t matter that he wanted sex during our sessions or that he said, “You have to lie for me,” when he learned that my uncle was asking questions about him at the college where he taught. Nor did it matter that he gave me Quaaludes, knowing I wouldn’t object to sex if I was sedated, telling me, “They’re just aspirin,” because after all, he loved me. And I let myself believe him when, after a suicide attempt six months later, he came to the hospital and told me, “You just didn’t do it right.” * * * * * * * * The meditation practice I first began when I was sixteen came and went throughout my life. I would re-devote myself to it from time to time and then abandon it when life got busy or I became depressed. A few years ago, I took it up again and made an effort to make it an integral part of my regular yoga practice. When I again began sitting in meditation, spending time on my yoga mat, and meeting the Self within, I realized that what I thought I was running away from wasn’t real, and what I had been running toward had been a part of me all along. Feelings are transient, but I am a never-changing spirit. The sense of well-being I seek is within. The companion I seek is within. My true source of peace is deep within. I don’t have to go looking for it in false prophets or selfish psychiatrists or the bottom of a wine bottle or a group of people in the hills of California. The place in the world I had been searching for was ultimately found in the quiet of my own mind.

After suffering multiple traumas and shattering losses, Suzanne Ludlum found herself in the depths of blinding depression and unimaginable despair. She spent nine years bouncing between psychiatric hospitals and psychologists' offices, suffering further at the hands of the very people who were supposed to protect her.

After hitting bottom, Suzanne began her long journey toward healing, during which time she stumbled upon the one modality that would make the most difference in her eventual climb out of darkness.

Critique: "An Imperfect Pilgrim: Trauma and Healing on This Side of the Rainbow" is an inherently riveting, deeply personal, and exceptionally well written, and impressively candid memoir in which Suzanne takes the reader along on her extraordinary journey as she discovers how mind-body practices were the key to helping her reclaim her lost life. While very highly recommended for both community and academic library Contemporary American Biography collections, it should be noted for personal reading lists that "An Imperfect Pilgrim" is also available in a paperback edition and in a digital book format.

Suzanne lives along the shores of Lake Mooney in Fredericksburg, Virginia, with her husband and daughter. She is a yoga therapist and works with people who suffer from trauma and mental illness. She is also an artist, and has exhibited her work internationally with rave reviews. Suzanne is still a warrior who hopes she has finally conquered her demons for good this time.