Notes from the Softer Side

A Roadmap to Achieving God's Plan for Your Life 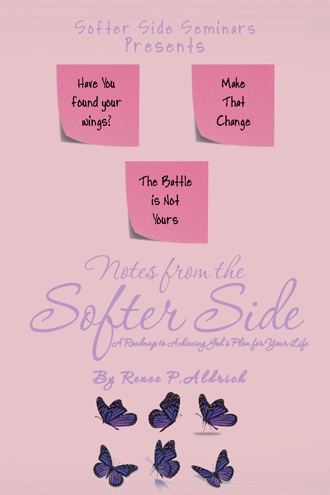 The What -- The Why -- The Where -- The When and The Who of Self Esteem Self Esteem refers to the level of belief in, and love you have for yourself. If you have self esteem this means you recognize your value, as a child of God who is perfectly imperfectly made. Someone asked me once, “where does self esteem come from?”. A better question is “how is self esteem developed?” When we are born we enter this world with a blank page. There is nothing on it. We don’t have a clue about ourselves, and do not know if we are good, bad or in-between. By the time we begin having a sense of our own existence we start to get feedback from our immediate environment; which includes: parents, aunts, uncles, other relatives or key persons involved in our development from birth until just before we go off to school. This feedback usually goes something like this -- Oh, she is so cute or what a bad little girl or your hair is so nappy that I can’t do nothing with it or she is so pretty, look at her good hair. Even worse, if we are African Americans, it may go like this She is so pretty, hmm if only she wasn’t so dark. All these things we may have heard and more. At this point, that once empty page starts to fill up with things that begin to define us, and most of these things on our page come straight from the perspective of others. As time passes, we get more exposure to our world from either parents, or others directly involved in our care, and we hear even more things about ourselves. Some of those previous comments are confirmed, and sometimes new things are added. Then there are others’ opinions of us, which end filling up our page, are usually unsolicited and are many times clouded by their own personal baggage and/or unresolved issues. Who knows what people have been through that creates in them the need to malign others? By the time we become adolescents and our page is a little more than half full; our peers become more important to us, we discover the opposite sex and the dreaded media. All of these enter our lives and the position of our self esteem is at greater risk as we begin the “am I good enough” dance? Between the confused state that adolescence often leaves us in, the signals from the media, peer pressure and a natural inclination to seek the attention of the opposite sex; we begin to get lost in society’s definition of ‘good enough’, pretty enough, thin enough, light enough, tall enough, and so on and so forth. Many times there are other things in our past that increase the way we quickly internalize the negative things that have been drummed into us. As our own opinion of ourselves decreases because of some poor decisions we’ve made, which are tainted by this poor sense of self, we become vulnerable to abusive relationships. Often we put up with being disrespected in general, as we stay in unrewarding jobs and relationships because we don’t believe we deserve better. Additionally we engage behaviors that will validate some of what our page says about us. When I was 19 I was in a program sponsored by a local corporation and the Kaufmanns Department store. This program was designed to be a refresher course for Black Women who had taken secretarial courses but had not been in jobs where they were using these skills, but also an effort on the part of the Corporation to provide a program that would increase the diversity within their company. The days in the twelve-week program were broken up with the morning being devoted to English, grammar and literature and the afternoon was spent drilling on short hand and typing. At the end of the program, out of the 35 girls, some would be accepted into the PPG typing pool, which was pretty much a “cream of the crop” job at that time in the late 60’s early 70’s. They had very strict guidelines and not everyone would be able to make the cut. At the end of this time I, unfortunately, was not successful and came short of the short hand requirement and completely bombed on the typing requirement necessary to be accepted at PPG. Each of us learned of our fate during a meeting with the corporation H.R. Rep along with a young African American Social worker. The HR rep was kind and understanding and assured me that a test is not a determining factor truly on your competency. Not so of the young African American Social worker. I was extremely embarrassed and quite shaken that I had not met those minimum standards. And of course I felt inept and diminished as this African American woman proceed to affirm my feelings of incompetence. This woman who had sat during the meeting glaring at me the entire time in a very disdainful manner said as nasty as she could, “I don’t know why you are crying, you had to know you weren’t cutting it. You probably didn’t even try. Even if we place you, I can’t imagine that you’ll hold the job very long—or any other one for that matter. When she was done, literally berating me (as the white H.R. Rep sat there red-faced and clearly embarrassed for me) I sat there afraid to stand up. It took me close to 20 years to recognize how I had allowed her comments to live inside of me and wreak havoc on my work life during most of that time. I believed her, she was a trained professional and I was a 20 year old who was just making my way—hadn’t even been introduced to my skills or self worth.

Notes from the Softer Side is a collection of writings and presentations on developing, cultivating, and sustaining the self-esteem necessary to maintain an optimal life—as God has ordained by the Plan he has for us as women. The publication is a guide for those seeking to execute the plan God has for our lives. It speaks to the issues of women that act as barriers to success, breaking the chain of low self-esteem, and provides tools that support the cultivation of a higher sense of self, maintaining high self-esteem, and reclaiming self-esteem. It gets into the detail on the definition of low self-esteem, how it occurs, and why it remains. More importantly, it can walk you through it and into the place we are intended to be.

Renee P. Aldrich is the Founder and Director of Softer Side Seminars an Empowerment and Self Esteem Building Program for Women and Girls, designed to help them recreate the way they see themselves. She has amassed a 20 career of teaching and reaching out to women and girls in matters of health and well being. A former Community Health Educator for a National Non-Profit HEALTH Organization, she has seen that many of the health issues women face have more to do with a low sense of self, feelings of inadequacy, guilt from past mistakes and more. As such and from these realizations was born the Self Esteem Building Program Softer Side Seminars. Additionally, Ms. Aldrich is an award winning writer; though she began her writing career later in life, her skill was quickly recognized as exceptional, as she won first place in the the Annual Ellie Wymert Award at Carlow University in Creative Non-Fiction, and the 3rd place in the magazine feature category of the Annual Pittsburgh Black Media Federation Robert L. Vann Journalism Awards. And her writing has been in nomination several years for the Robert L. Vann Journalism Award as well. She is a freelance writer in Pittsburgh, PA and has written for such notable publications as the University of Pittsburgh Chronical, and the University of Pittsburgh PITT Alumni Magazine, a prestigious funding organization The Heinz Endowments in its quarterly publication “H” Magazine, the New Pittsburgh Courier, and was the editor of a community Newsletter “The Hill District Consensus Group Speaks Out”. A highly sought after speaker, workshop leader, and seminar facilitator, she was also named as one of the New Pittsburgh Courier’s Pittsburgh 50 Women of Excellence. She currently serves as a Life Skills Coordinator for Pittsburgh Mercy Behavioural Health, where she coaches homeless individuals back to a place of substantial living. Empowering Women and Girls is her calling, leading individuals to find the positive plan God has for their lives is what she is committed to do.