I Just Want You to Know 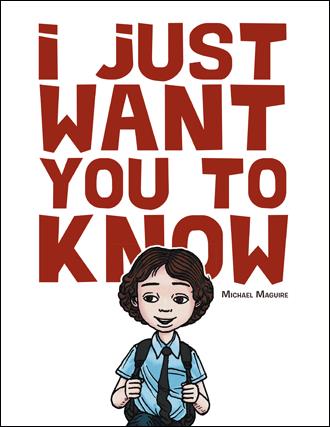 Edward goes excitedly to see his Mom to tell her he is home but is suddenly stopped by a sinking feeling in his belly. His Mom’s forehead, eyes, mouth and even her eyebrows appear to be shaped differently. It was as if someone had moved around the pieces of her face…it was shocking for him to see her like this…she looked like Mom but felt like a stranger. She passes Edward and says nothing. “Why isn’t Mom noticing me? Did I do something wrong? Is she mad at me?” Edward wonders to himself. Later that afternoon, Edward’s sisters come home, charging into the house. Mom, now aggravated, says to Patricia, “Clean up this house!” Patricia says angrily, “No…you clean up the house!” Now this wasn’t what Dad had in mind when he put Patricia in charge, but on days like this the rules were different. The next morning at breakfast, Edward asks nervously, “Mom, can Sean come over to play tomorrow?” Annoyed, she says, “No!...the house is a mess…all you kids think about is yourselves.” Because Dad worked nights he wasn’t around during the daytime. The kids only saw him on weekends so there was no one else to turn to. The three kids go off to school together. Edward’s stomach doesn’t feel well, he’s nervous and feels badly about himself that he did something wrong to upset his mother. But because he can’t remember what he did, Edward begins to believe that it is just who he is that is upsetting her. That afternoon Edward comes home from school, his stomach sinks. There is an uneasy calm in the house and a stale odor in the air. From that very moment he senses again something very familiar. Soon thereafter, his sisters come home. Patricia says, “Where’s Mom?” Edward replies, “I don’t know, she wasn’t here when I got home.” Suddenly, the telephone rings, “Hello?” Patricia says. “Hello Patricia, its Mr. Dee,” says their neighbor. Patricia says politely, “Oh, Hi Mr. Dee.” He says, “Listen Patricia, your Mom is here, we are going to have lunch and I will send her home a little later, okay?” Patricia replies, “Ok, thanks Mr. Dee…bye,” and hangs up the phone. “Mom is next door,” says Patricia, taking a deep breath. Edward immediately starts to clean the house in a panic, saying to himself, “If I clean up then everything will be where it’s supposed to be and she can’t get mad...and everything will be okay...and it won’t be my fault…and I will have saved us…I’ll be the superhero.”

Michael is just like you. He grew up in a middle class neighborhood and appeared to come from a family like everyone else - normal. By the time he was 17, he was very experienced at keeping the family’s secrets. These secrets were, after all, nobody else’s business but their own. And again, he appeared to be like everyone else - normal. It wasn’t until his late 20s that his five closest friends from college, 10 years after they met, each shared that they too came from families in distress: rageaholism, manic depression, alcoholism, divorce, infidelity, and mental abuse. Yet, each appeared to come from a family like everyone else - normal. He writes not as an authoritarian, educator, social worker or PhD, but as a person wanting to transform every child’s experience of being “less than.”