A Story of a Therapist’s Zero Hour 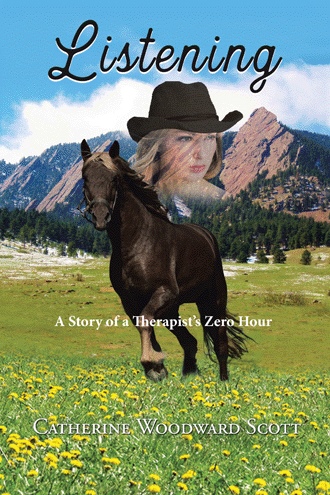 “Damn, I feel naked, buddy,” she told him, free hand massaging his powerful withers. He nickered in response. Good thing I stuck one of Jordan’s long shirts in my pack to cover my butt. I need a hard-core coffee to break up this morning. And those gourmet dinners arriving every day for a month from Doc’s wife? Now that is gonna ramp this naked caper right up into delicious. Listening tells of the mysterious power of deep listening to convert both listener and speaker via conversation, when thoughtfully done. There are interesting characters here: a Hopi wise man, a magnificent chestnut gelding named Skywalker, and a therapist who learns what little control she has over outcomes after all. Who knew chipmunks could double as toothy gurus and that tragedy could turn into healing wisdom? Doc, the vet who dared Jillian, the Boulder psychotherapist, to ride Skywalker into town dressed like a “gypsy ho”—maybe he knew.

Catherine Scott has been writing for thirty years since her first book, Divine Ordinariness, pushed its way down the “birth canal.” Her next offering was an award-winning novel called Booze at Breakfast, dedicated to her brother Johnny who died by self-inflicted gunshot. Booze was a composite of many families she worked with as an addictions specialist, with spiritual recovery as its sweet spot.