The Goldfinder Series, Book One 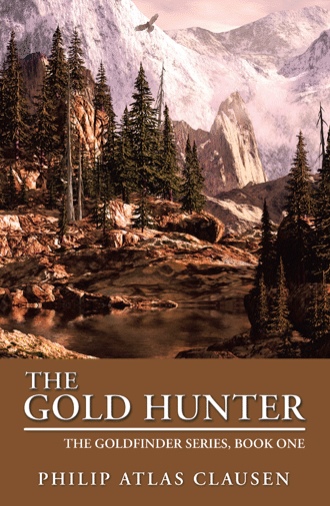 All of it was starting to come back now, along with the questions. How many years had the Indians kept this place secret, hundreds, thousands? And now you give this secret to a white man? He stared down at the sandy beach and froze. Little footprints marked the sand, this way and that way--little girlprints. "Annabel!" His voice echoing far away. He listened hard. Little footprints led to the downrunning stream. He followed them, spotted a small object in the sand, and picked it up. It was a blue button. Annabel couldn't bring her doll so she brought its head, and now it was falling apart. And it proved she was here, she had made it this far. But was she still here? Follow the footprints. They led to the Horse Cave and the Falcon Stream. He called to her again. "Rocky, I'm here now, come out now." His voice echoed: Out-now-out-now. She wasn't here, so what next? Go down the Falcon Stream--see if she's there. Don't pass out. Try not to dream. Go now. The place below had to do with dreams, remembering the long-lost past, all dizzying and confusing. If a person had other lives, you weren't supposed to remember them. As far as he could tell, that was the trouble: This place beneath the lake the Indians called The Luminah made you remember. Beneath each death, like some bottomless archaeological dig, lay a forgotten life--then another layer of death--then another layer of life. Down, down, and down, layers of life and death, all too confusing. It made you crazy and it made you hesitate. It was very scary. Maybe superhot gold made you remember. People shouldn't remember what happened a thousand years ago. Today was enough. He was also pretty sure of one other thing. The Luminah could kill you. He stood before the outstretched wings of the Falcon. Light pulsed and water disappeared down the hole. Going down into that place again? Yes, if Annabel went there, he had to go. What if she was there right now, too scared to move, remembering all the past? He jumped into the shallow Falcon Stream and ran in a low crouch and it took only minutes to find something that looked like Annabel's work. A cannonball pile of gold with the top ball missing: What did that mean? He yelled down the tunnel, "Annabel?" No answer. Hurry down the stream. It quickly turned into a watery staircase and it was getting warmer, like being swallowed by a volcano. One interesting observation: Going deeper didn't require a lantern. Light flickered on walls bright as a fireplace. The next minute the cave became dim as a dying star--brighter then dimmer--what did that mean? Moments later he saw the blaring hole of light. He began shaking. Maybe the brain couldn't remember, but his sure body remembered. This is where the really bad stuff began to happen the first time he came here, the part that was all blacked out. Something pretty horrible must have happened if you could blank out anything this bright. He thought of a grim epigram from his schoolboy years. Dante's Inferno. Abandon all hope ye who enter here. The cave widened like the smooth bore of a blunderbuss shooting blasts of blinding yellow light. It was starting to come back now and he was stunned his mind was capable of erasing such amazing sights. Beyond this point was a huge cavern where water exploded into steam--into fiery hell. He remembered that now. Ten paces from the gold-blazing mouth he called out, "Annabel!" Squinting hard he poked his head inside the lightbeam. "Ah, God!" He remembered now. Beyond was a waterfall plunging over a rim of slippery volcanic glass. The blunderbuss opened and then--there was a fall. That first time he had been blinded and tumbled into the plunge pool thirty feet below. Better not do that again. He squared himself and squatted--and then duckwalked through the opening like walking into a blowtorch. He remembered something that gave him courage that first time. The bottom of the fall, behind the churning whitewater, was a hollow space, an undercut behind the fall (that would one day collapse). A man could get behind the fall, getting relief from the light and heat. He remembered now, that it saved his life the first time. Climb down the waterfall. Get relief behind the fall. Go! He slid carefully down the warm, bony rocks. Once down, he hesitated at he plunge pool and looked through squeezed fists. It was still there. Fiery golden hell. The Gold Chamber roared, boomed and belched bubbling gold. And Annabel was not there. 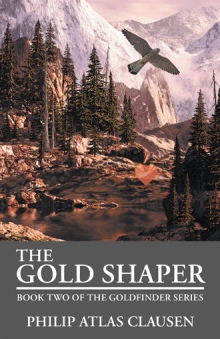 This is an epic story (four books) about a boy in Gold Rush California who finds the entrance beneath a lake to a vast motherlode of gold followed by the devastating results of sudden wealth. His dreams of doing good--building his father a steam-powered lumber mill, a beautiful white house with blue shutters for his mother, and a fine speedy horse for his little sister--all are shattered when the king of the mountains comes after him demanding a king’s share of the gold. Rumors of California gold ran wild. Rivers of solid gold lay hidden in mountain valleys and could be harvested with a pick and shovel. Indians would trade chunks of gold for a pretty scarf or a few beads. Somewhere is a secret lake of gold. On his seventeenth birthday Petr Valory finds Gold Lake high and hidden in a valley protected by the Indians for centuries, a place that is a test of courage, a sacred place for dreaming. Far beneath the lake is a hidden chamber and a pharaoh’s wildest dreams of gold. Petr finds a fortune and his life turns into chaos. No man should see what lies beneath Gold Lake.

Philip Clausen graduated from San Jose State in 1971, with one previous novel, The Black Butterfly Woman. He is an experienced gold hunter in the Sierra Nevada of California. He is currently retired and writing in Ames, Iowa.