From Fear to Fearless 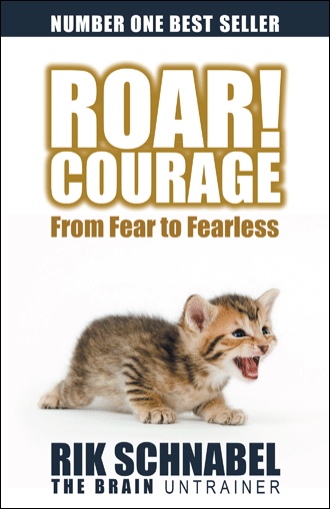 Everything that you want from life will come from your courage. Discover a proven courage formula that transforms any fear to fearless.

Rik Schnabel, Australia’s top Brain Untrainer draws upon his ten years of research on overcoming fear to show you how to be truly courageous.


 comprehend how fear can make you tired, stressed and unhealthy;
 shift from being fearful to fearless;
 turn addictive traits into advantages; and
 achieve anything you set your mind out to accomplish.

You’ll also learn about the seven types of courage, the courage paradox, why you need courage to be wealthy and how passion can dissolve fear.

ROAR! Courage serves as a call to all of us to rise above our limitations, redirect our addictions and step into the shoes of our leaders and heroes.

While fears will always intrude on your life, you can silence them or you can even use proven techniques to make fear your friend.

Find out how to do it, step-by-step in this though provoking guide to living a more courageous life.

Rik Schnabel, the Brain Untrainer, is one of the most knowledgeable authorities on behavioural change in Australia. He believes that most solutions to problems can be found by untraining the brain. A public speaker and a life coach trainer, he’s also the author of The Secrets To Creating A Life Beyond Limits and The Power of Beliefs – 7 Beliefs That Will Change Your Life. Visit www.RoarCourage.com to learn more.