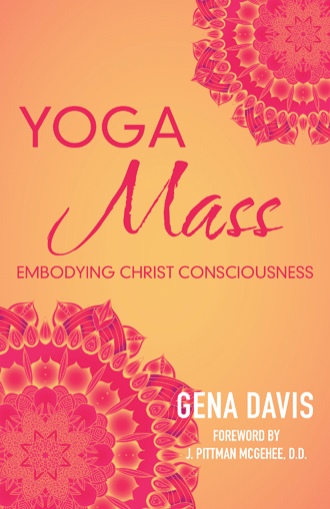 YogaMass Embodying Christ Consciousness Gena Davis Foreword by J. Pittman McGehee, D.D.   CONTENTS ACKNOWLEGEMENTS FOREWORD PREFACE INTRODUCTION CHAPTER 1: THE BIRTHING OF YOGAMASS – Creativity and Courage CHAPTER 2: ENGAGING ALIVENESS – Being Fully Human CHAPTER 3: THE INNER LANDSCAPE – The Crucial Pilgrimage CHAPTER 4: SELF-DISCOVERY – Finding the True Self CHAPTER 5: WHOLENESS AND UNION – Goals of the Spiritual Life CHAPTER 6: MAKING THE ANCIENT NEW (AGAIN) – Returning to Soul CHAPTER 7: AWAKENING – Healing and Inner Knowing CHAPTER 8: EMBODIED SPIRITUALITY – Incarnation CHAPTER 9: LIVING IN THE FLOW – Surrender CHAPTER 10: SACRED RITUAL – The Eucharist CHAPTER 11: AWAKENING INTO CHRIST CONSCIOUSNESS – The Life Teaching of Jesus CHAPTER 12: YOGAMASS – Integration through Ritual and Practice APPENDIX: YOGAMASS LITURGY ENDNOTES   Preface If you love God and you love yoga, this book is for you. Welcome. You don't have to practice yoga in secret, wondering if you are being unfaithful to your religious beliefs or tradition, even if you are a Christian. A Christian myself, and an ordained Episcopal priest, I have also studied and practiced yoga, and discovered that its ancient truths are compatible with Christian beliefs. You see, yoga itself is not a religion or a belief system, although inherent in its teachings is a path to the depths of a spiritual life in the human experience. Yoga is an ancient philosophy, developed over 5,000 years ago. It was explored and explained through the lens of both the Hindu and the Buddhist traditions because of its origination in India, although it predates both of these religions. Many people mistakenly believe that yoga is part of the Hindu religion, or the Buddhist philosophy. Yoga is actually the science of human experience, explained and illumined initially by Hinduism, and later Buddhism, as those were the religions of the peoples in the country where the science of yoga originated. As a science, yoga facilitates connection to the highest truth and awakens greater awareness and connection to self and life. As we journey together, I will lead you through my personal discovery of how yoga provides a path for knowing oneself — and for the seeker of wisdom and truth, yoga also offers a spiritual path for seeking the divine that Christians and people of many faiths can embrace. A spiritual path flows naturally out of the human experience, because we humans are spiritual beings. Yoga does not change or negate one’s religious beliefs; instead, the science and practice of yoga can be a bridge between the understanding of self and a path to the divine, which Jesus refers to as the kingdom of heaven. As Jesus said, come and see. INTRODUCTION This is my body This is my body. Upon hearing these words, while flowing through a series of standing yoga postures, it all became crystal clear. It was one of those aha moments in life. It felt as if the heavens had opened up and downloaded clarity into my whole being. This is my body. These were the words spoken by Jesus on the last night of his life, with his friends at dinner, when he instituted a new way of being in community, in relationship, with his presence. “This is my body, given for you” (Luke 22:19). These are the words spoken in the Eucharistic prayer by the priest, remembering Jesus and following his commandment to “do this as often as you can, in remembrance of me.” This is my body. These are the words spoken by my yoga teacher, Amba Stapleton, her voice ringing clear as she leads our group of 40 in teacher training and guides us through vigorous and energizing movements. “This is my body.” Integration On the first night of yoga teacher training, each participant was asked to write down a word or phrase next to our photo that described our intention for the next 28 days. My word was integration. I knew that in the days ahead of me, training in the warm, humid jungle of Costa Rica would be demanding physically and psychologically, but even beyond my obvious limitations, I knew deep down that the most challenging component would be spiritual. You see, I am a Christian, and I am an ordained Episcopal priest, and yet surprisingly yoga had spoken to me as deeply as the sacraments I have been ordained to administer on behalf of the Christian church for the people of God. So my word was integration. I needed, on the soul level, to find a way to integrate the gifts of the scientific and spiritual practice and truths of yoga into my spiritual life as a practicing and faithful Christian. It felt risky, scary, adventurous, and one of the most exciting journeys I had ever embarked on! And it felt so right, so necessary, so inescapable for my own soul to pursue this path as my path to authenticity. My Body, Your Body This is my body. Each and every one of us can say this unequivocally — some more hesitantly and some more joyfully than others. Our bodies are unique and there is no other exactly like ours on the entire planet. For many women, our bodies are a constant reminder of how we are “never good enough,” according to much of modern media’s messaging. We think we must look like the women in the glamour magazines: tall, thin, perfect hair, skin, and teeth made even more perfect with photo manipulations. As a teenager, and like most teenagers today, I believed I needed to be more like those images and less like who I actually was. I did love to wear those platform shoes of the 70s!

YogaMass: Embodying Christ Consciousness bridges yogic principles and practices with Christian spirituality and worship as a path for bringing the whole self (body, mind, soul, and spirit) to the experience of spiritual awakening. The author, an ordained Episcopal priest, weaves together spiritual practices from different traditions with her own discovery that yoga’s ancient truths are complementary with Christian beliefs — taking one deeper into the spiritual life in ways that people of diverse faiths can embrace. Blending yogic practices with Christian spirituality and worship, the Reverend Gena Davis has co-created an exciting and powerful new practice of spiritual ritual and celebration called YogaMass that leads to embodying Christ Consciousness. On and off the yoga mat, this book points the way to discovering a whole-self spiritual experience and connecting with God through an awakened open mind and heart. “I loved this book! The author, the Reverend Gena Davis, shares the story of her amazing spiritual journey that culminates in the creation of the world’s first YogaMass service. This alone would make the book well worth reading, but throughout, she integrates sacred writings, stories, and poems from spiritual masters of western and eastern spirituality, all the while never losing sight of her own Christian heritage. It is a remarkable accomplishment. You will be blessed by this book and want to share it with others.” - The Reverend Dr. John K. Graham, president and CEO, Institute for Spirituality and Health at the Texas Medical Center, Houston “I am delighted and privileged to encourage those who seek to worship God with all that is within to pick up and digest this spiritual teaching presented by the Reverend Gena Davis. Gena has captured the importance of worshipping God with, as the Psalmist uttered, ‘all that is within me.’ I am fascinated by the interplay of yoga and liturgy within these pages, and find myself wanting to go deeper into both. I think the Reverend Davis is on to something that has been lacking in our Christian path and tradition. The interweaving of her personal narrative and the spiritual insights she gained through the study and practice of yoga unveils how God’s truth makes itself known through many different paths.” - The Reverend Dr. Richard Kleiman, retired Presbyterian pastor “Yoga is an exploration based on experiential processes. It is defined by our own internal truth! Making Yoga universal but deeply personal is something Gena Davis expresses so beautifully.” - Robert Boustany, Yoga instructor and master, and founder of Pralaya Yoga system

The Reverend Gena Davis is an Episcopal priest, yoga educator, and founder of YogaMass. She serves a mission congregation in Houston, Texas, where she leads YogaMass. She holds a Bachelor and Master degree of Business Administration and a Master of Divinity from the Seminary of the Southwest. She is a spiritual director, meditation facilitator, retreat leader, and a Benedictine Oblate with the World Community for Christian Meditation. Gena completed her first yoga teacher training at the Nosara Yoga Institute and is currently training in the Pralaya Yoga system.