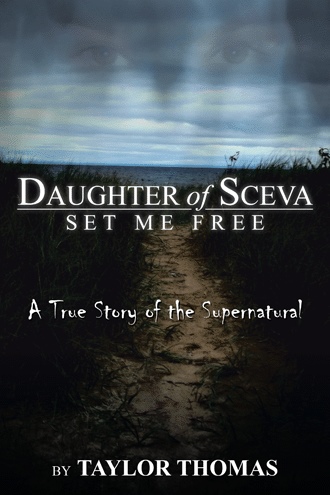 Most of my life I felt like a mute and deaf child in a padded sound-proof cell, screaming to get out, but no one could hear me. I was imprisoned in darkness. Funny how one night something did hear me- and it was the very darkness that entrapped me. I was alone in my bedroom, but heard a present, yet unseen voice whisk by. In soft, scratchy tone it whispered to me, "It's time." There was no confusion as to what the voice meant. It was time I ended my pain. What I believed was my torment was never going to stop. I felt I had no choice but to end my life. I was sure it was the only way to get the agony within me to cease. Moreover, I knew what the voice was, and I could no longer stop it from invading my life. I was going mad. No more was I able to elude with people or alcohol, pills or fake smiles. Those powers and principalities were a formidable factor as to why I was where I was, and they weren't going to leave on their own. It's said some have skeletons in their closet and we all have our inner demons. I had an abundance of both, only my demons were not an allegory. They were incarnate. The voice I heard that evening was not my own, but I agreed with its unction. It was the voice of a demonic being which thrived on a soul's anguish and a heart's decision to give up. Dark influences had been with me for many years and they thought their victory was at hand. I was convinced there was nothing decent left of me. Anything remaining in me or of me was tainted and depraved. Persuaded there was no hope, I saw tomorrow only brought more of yesterday, and yesterday's strong point was that it was not today. I was at the heart-wrenching point where my hope was death. It was a crushing realization- like the last few seconds before driving full speed into a brick wall. Blackness finally encompassed me in totality and my spirit was no longer able to breathe. I was being spiritually suffocated by something. I placed my own hands over the hands which were tightly around my soul. I blindly assisted in the strangulation. Contemplating reaching for the bottles of pills and pouring every one into my hand, I rewound and played back in my mind certain parts of my life. Evil stomped on any memories of joy with thoughts of the dismal days leading up to where I was that very moment- saturated with alcohol, crime, violence, promiscuity, witchcraft, lies, etc. My soul was being corroded, inch by inch. Sinister principalities blossomed with my life's circumstances. I was wilting away for years. I would have cried out to be set free but didn't realize I was in prison until it was too late. By then I lost my ability (or the initiative) to call for help. Hot tears streaked down my face as I blubbered with regret and shame. I was too far gone in my mind to identify faith. Faith was there, but I'd chosen to be a part of the darkness for so long, I couldn’t see any light. I was very angry at myself for giving in and doing so many things wrong, making bad choice after terrible decision. Disgrace encamped me. I fully believed there was no turning back and there was no future ahead. I had pushed good people out of my life and wouldn't let anyone in. I stood alone, unfeeling and hardhearted, wallowing in remorse. With a huge sigh in procrastination, I looked to my left, where my dresser sat. I saw my reflection in the mirror- what a wretched case I was! My long red hair was matted like a bird's nest. Black mascara pasted my tearful swollen eyes while long black lines ran down to my jaw line. My lips were blotchy and smeared red from cheap, runny lipstick. Dirt rested on my neck and chin from tripping onto the pavement upon coming into my apartment. Who was this person in the mirror of reflective truths? Certainly no one I ever thought I would become. I wanted so much more. I was revolted at what I chose. "I hate you." I told myself in disgust. Suddenly, I saw something that devastated me. Not only was I a troubled rogue in the physical realm, but in the spiritual realm as well. I never considered my spiritual self before, but I was allowed to observe what repugnance I reflected in a supernatural capacity and what my soul looked like in the spirit realm. It was even more repulsive. I set my sight on a pale yellow face. I had sunken eyes lamenting desolation. My hair was thread-like and scraggly, lacking luster and pigment. Disgusting thin patches of flesh clung to my ashen bones and deep dents took over parts of my body. I watched in revulsion as pieces of skin on my arms withered and fell off to the ground like dry leaves on a fall day. My face resembled that of a hundred year old woman, sickly and forlorn. Although this was not me in the carnal world, I knew this was who I truly was: someone who was sick from the inside out, slowly dying from the outside in. After I witnessed my true self in the mirror, it was difficult to catch my breath. I was in shock. A dark shrouded being materialized behind me. Its presence was captured only by the mirror and took form for my benefit. It was something I was acquainted with. It had come to me many times in an assortment of ways. It made itself known as an innocent little girl, sometimes as a faint voice, other times as horrific images, and even stints as a friend. It was a familiar spirit.

With a life enveloped by the occult from childhood, Taylor dove into forces of the unknown in an attempt to master them. Walking the line of witchcraft and madness, she struggled to find answers. From toddler to adulthood, a continual series of bizarre and horrifying paranormal experiences shaped her life, which she accounts through the pages of each chapter, sharing what was revealed to her with each experience. This nonfiction book illustrates the connection we all have with an unseen spiritual realm and reveals truths behind the new-age movement and the paranormal. Chilling but never short of fascinating, what Taylor shares will rivet you to the end, making you question your own reality. Daughter of Sceva is more than a good read; it’s a shocking, transparent biography full of real-life encounters entangled with spiritual enlightenment. It will bring forth ideas its readers may not have ever fathomed. This is not a book of new-age opinions or metaphysical answers. It’s a combination of encouragement and education, with engaging facts and thoughts on how the paranormal (and all aspects of the supernatural) entangle with each and every one of our lives. Within the pages of this extraordinary novel lie words of wisdom and miracles, frightening facts, and spiritual enlightenment. What you don’t know can hurt you! For any person seeking penetrating truth or some sort of life meaning, struggling with emotional or health issues, longing for faith or just plain answers, this is the perfect read for any soul searcher and truth seeker. Get ready to read and be shaken up.

Author Taylor Thomas not only writes about the supernatural aspects of life but is also a podcaster, speaker, and investigator of all things spiritually bizarre. Known as the Milwaukee radio personality “The Ghostlady,” Taylor has been featured in media, publications, and documentaries, sharing her knowledge in spiritual afflictions. She writes chilling accounts bridging from her experience and work with the supernatural for more than forty years. She never holds back a thought, feeling, or discovery in her writing. Taylor lives with her family in Wisconsin, where she counsels and assists youths, adults, police, and the medical field with cases involving the occult, self-harm, mental illness, and supernatural tribulation. To learn more about this book and the author, go to www.imtaylorthomas.com.