Staring Down the Beast

How I Enjoyed Myself Well from a Brain Tumour Death Sentence 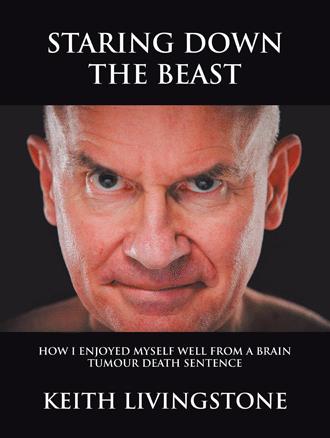 ''Funny Moments' Straight after my first craniotomy, which was just a biopsy, my brother rang the hospital from his home in Wales. He was extremely concerned; we are twins, born 5 minutes apart. The phone was given to me, and when he said “Keith, it’s Col here…how’re you going, mate?”, I waited ten seconds before groaning incoherently with a prolonged “Buu…uuu…uuh” utterance, as if I’d just been hit with a mallet. There was stunned silence before I said “Got ya!” in my normal voice. I won’t recount what he said in reply. He then grilled me on early life events which only he or I could recall, and was amazed that my memory could be so intact and that I could sound so normal straight after brain surgery. In fact, the hippocampus, which is thought to be the seat of long-term memory, is anatomically quite some distance away from the pre-frontal cortex which the tumour was located beneath. In the early days following that first surgery, I underwent radiotherapy 5 days a week, for six weeks, and quite often chose to walk a couple of kilometres home along local laneways and backstreets to get some nominal exercise. I wasn’t thinking how I might appear to other people; rugged up in heavy winter garb, with a cruel-looking scar across my skull, and a ‘zero’ buzzcut. I wasn’t particularly ‘with it’ so soon after surgery, either. On one occasion, I spied a middle-aged woman on her deliveries of the local free newspaper. This attracted my attention, as my second daughter, Miranda, who was about twelve years old at the time, was expressing interest in a part-time job. I ranged up from across the road and said “Excuse me, how easy is it to get a job like yours for….”; …”a young schoolgirl?” She scuttled away, very quickly. I saw her reach for her phone, probably to dial triple zero, so I got out of there via a meandering route to avoid easy detection. A few weeks later, with my scar not looking so angry, I was accosted at a roundabout near the town centre by a chirpy guy leaning out of a white van. He said “Hey, Mate! Are you looking for a cheap sound system?” I said “no thanks” to the jovial fellow, before kicking myself for not taking him up on the offer. I could have arranged delivery to an undercover policeman if I’d been thinking normally. I must’ve looked quite rough and ready because I hadn’t shaved for a couple of days either. The radiotherapy oncology department was made a lot lighter in mood by a small brunette bundle of irrepressible energy named Joanne Maree Turner. The first time I saw her, she was skylarking around with one of the patients who was in a wheelchair. She seemed to be thumbing her nose at proper hospital decorum; not the sort of person I’d employ in a hospital, I thought. But little did I know what Jo did for the department out of hours. She organised picnics and get-togethers for those who had ‘graduated’ from the radiation programme, and she insisted on formal letters of resignation when our radiation treatment ceased. Jo was employed by the hospital as an orderly, however she made waiting for therapy a laugh a minute for those with a sense of humour, and probably was a source of considerable annoyance to the few without a sense of humour. Jo often dressed up in a white coat, with a toy stethoscope. Her best accomplishment was in applying for the role of radiation oncology Head of Department in the Bendigo Base Hospital division of the Peter MacCallum Hospital in Melbourne. In the folder that she kept in the waiting area was a proud letter of application from Jo, who said she was ‘already running the department’. The Professor who headed the Department wrote back to her, thanking her for her application, with the suggestion that she acquire a medical qualification first, and then he’d definitely ‘look at it’.

Picture a former elite athlete, successful chiropractor, and father of five being told that he has a terminal brain tumour. When it happened to Keith Livingstone, he had every excuse to immerse himself into a dark maelstrom of hopelessness. With no known long-term survivors of glioblastoma multiforme at that time and with doctors unable to tell him how to get better, he was getting a death sentence. But he ignored the hopelessness of his situation and got on with the job of living, enjoying himself and making light of the situation. He also studied natural health and traditional medicine to see what he might do—if anything—to help his situation. Slowly and steadily, he has regained his health, with a couple of setbacks along the way. His progress would not have been possible if he had chosen to accept that he had a terminal condition. Join the author as he looks back at his early life, family, friends, and the philosophy that has helped him wage a brave battle staring down a beast.

Keith Livingstone is a chiropractor and a former elite distance-runner who is the author of Healthy Intelligent Training, a popular book on endurance training. He is married with five children and lives in Bendigo, Victoria, Australia.