Visions of the Rapture and Unseen Realm

While Experiencing a Life Similar to Job’s and Visions Beyond the Veil, an Angel Showed Me the Rapture. 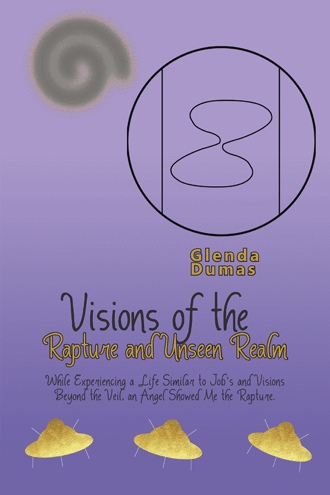 The Lord is asking us to remember Him. One way to remember Him is by fasting and prayer. How many of us get up and thank the Lord for letting us see a new day? How many of us pray in the morning and night for our families and friends? The Lord wants us to pray to Him; this is our way to talk to Him and He answers. My First Vision of the Rapture It was Saturday, March 26, 2005 that I saw my first vision of the Rapture. This date is very significant for me and my family, because my mother died on March 27, 2004. The date of the vision was almost a year from the day that my mother died: my daughter brought this fact to my attention. The Lord operates in dates and times. I still get chills as I repeat what I saw. My head was motionless on my pillow. The vision began with me, my daughter and my two sisters standing outside of my mother’s house. One of my sisters and my daughter left us to go inside of a neighbor’s home. Everything around us was calm and there was no warning of harm or any type of calamity befalling the earth. It was a normal day and all of us were at peace and had no worry. We appeared to be going out into the neighborhood to talk to our neighbors or just stand around outside and talk as we normally do. For some reason, the sister with me and I looked to the sky. We did not hear or see anything unusual, but we looked to the sky. It was a deep blue crisp sky with two small snowy white clouds scattered about. It was a deep dark blue that was not obscured by any smog. It was a dark blue sky that one sees sometimes in the fall as the heat of the summer is fading, or perhaps, the vibrant, brilliant deep blue sky of spring that is getting ready for the heat of the summer. Even now, I tend to shudder and await a presence in the sky when I see this color of blue as I look to the sky each day. Suddenly, the blueness of the sky started to swirl as though something was making ripples or swirling motions in the air. A translucent planet similar to the earth appeared: it was the outline of another world skillfully placed against the deep blue sky. It was translucent in the sense that there appeared an outline of a planet-like object in the sky. It did not have the land mass and topography that the earth has; but it was another world nonetheless and very similar to earth as seen from space, but without visible outlines of islands showing. The planet appeared to have pear shaped north and south land outlines that were connected by a small strip of outline that may have been a land mass. It, also, had well defined continuous borders on either side of these presumed landmasses that ran from north to south. We stood there hypnotized at the sight of this earth-like sphere, trying to figure out what it was. Our minds and every thought transfixed in our heads as to what this could possibly be that suddenly appeared out of seemingly nothing but the deep space. Before I could speak a word, my sister said, “Look, there’s a hand!” The hand was very real and as translucent as the planet that we were seeing. It appeared as an outline of a hand just sitting in space to the left and just below the translucent planet. In the next second, the hand was completed with the solid features of an enormous man which I identified as an angel of the Lord clothed in a robe down to his feet which was girded about the waist with a thin rope-like item. He literally filled the sky and was taller than any building or mountain that I have seen on earth. There was the angel of the Lord with a light colored Ram’s Horn or Shofar immediately putting it to his mouth to summon the saints to Heaven for the Rapture. Yes, I said the Shofar, the Jewish religious horn that is blown to bring the Jews to services. Yes, I said the Jews, because the Jews are God’s chosen people and Jesus was a Jew. The angel or person that I saw was dressed in a long light colored robe. I can’t remember at this time whether or not it was bound with a tie at the waist, but since I wrote this down some time ago, as stated above, I will not make any changes to the first statement. See the importance of writing down the vision and making it plain as the Lord demands. He had a small band around his forehead and hair. I did not see any wings, and I did not hear the sound that the Shofar made. I turned to see where my sister and daughter were at this time. My sister and the people who were standing with her shrank in a second, the twinkling of an eye, and were no more. That is how it happened. First they shrank, clothes and all that they had on them and suddenly, they were gone! Let me note here: Jesus was resurrected and left behind his burial clothes, according to the Bible. He had to ascend to God before He could be touched. The Raptured saints, will have glorified bodies immediately, because Jesus has paid the price and they will be taken directly up, clothes and all. Remember, Paul said we will be changed. I will talk about this later.

The Lord shall descend from heaven with the voice of the archangel. The angel that I saw may be Michael. Michael and Gabriel are the only archangels that are mentioned in the Bible. Michael appears to have a key role in the end-time plan of God. Therefore, it may be a strong guess that Michael is the angel that I saw and communicated with about the Rapture. I also have a special message for gang members, drug abusers, adults, teenagers, and the youth. I wrote my visions down for you to know what is out there waiting for you on the other side of the veil. I peeped over and saw some things that were good and witnessed a horror that was beyond my wildest dreams. Most of you have not read the Bible, and a number of you who have, act as though you have forgotten what is in it. I often encounter people, old and young, who say that they can’t understand the Bible. Therefore, I use a number of verses that are taken directly from the Bible to support the visions that I have seen. I am doing this purposely to acquaint you with a book that you all know but very seldom pick up to read. Hopefully, it will be a reminder that the Bible is inclusive of everything from the beginning of time to the end. Most of these Bible verses are self-explanatory.

Glenda Dumas is an author of books about respect and character education. She was transported into the future and saw an archangel blowing the shofar to signal the Rapture. Satan tried to stop her from revealing this message, but it is here for all to read.