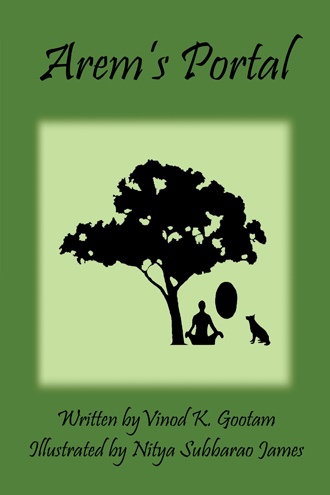 Arem sat erect and motionless under a tree at the park, seemingly defiant of his dynamic surroundings. As the stillness he longed for cleansed his field of reason and perception, he began to hear a faint and distant call. He didn't know what it was or where it came from. At first he tuned his ears to the four directions attempting an analysis keeping his meditative position. His companion Drake was thoroughly distracted by the sounds of children playing and other dogs barking along with what was surely a myriad of summer scents filling the air at the park. A whistle blew in the distance as young men tackled each other over a ball. Behind the usual, the unusual sound would wax and wane without rhythm. All the while he heard it best in the stillness which he found he enjoyed more and more with age. He reflected on the mournful sounds and thought, "I hear sounds echoing within sounds." Then he listened more deeply and began to distinguish the vocal calls of a woman. No longer seeking stillness in the wake of what was surely some sort of trouble, he calmly rose to his feet. He was a broad shouldered, athletically built fellow with a good six feet to his height. His hair was swept to the side and back where it cascaded in wavy light brown locks to the scruff of his neck often crossing the borders of his cheeks and face. He was a man who looked no more than thirty with a calm, regal demeanor that seemed right for a gentleman twice his age. His eyes were gray and were now set with focus as he panned the horizon toward the flocks of warm weather lovers enjoying a sun drenched park that was conveniently located just steps from the town he called home. A long winter had just ended and it seemed everyone was making the most of what was proving to be a magnificent summer. Yet, Arem had lost sight of all that was usual at the park and now began to consider the echoes off of the trees behind him. He then turned to face the forest. “What do you think Drake?” asked Arem of his friend. Drake, was a robust yet gentle and quiet German Sheppard that stayed close to his friend at most times. He would carefully observe and obey Arem knowing him to be trustworthy of his affections and loyalty. The two possessed an uncanny ability to communicate with each other without much effort. Drake saw the steely-eyed intentions of his friend which indicated his wish to find the source of the sounds. Drake instinctively nudged Arem and gave a gentle yelp in the direction of the forest. The dog was more easily able to decipher the faint sounds resonating from the trunks of the old oak, elm and poplar trees that constituted the acres of forest behind them on the edge of the park. Considering the heat and his companion first, Arem dispatched some water from the thermos in his knapsack, which was lapped up quickly. He stood at the tree line all the while staring intently into the forest. He remembered his grandfather telling him that, “Forests should always beckon respect from the wise.” With a motion of his hand, Arem sent Drake in just before him and with a quiet sigh, entered the shadowy canopy himself unaware of what lay ahead. Arem made long crackling strides through the undergrowth of the forest. A chorus of cicadas seemed to bombard and at times even deafen his hearing and distract his senses. For a moment, doubt entered the mind of the young man making his way deeper into a forest that was growing darker and louder with the sounds of nature. He found himself mesmerized by the stark change of environment. One moment he was in a tamed park with the shouts of children and their mothers and now he found himself lashing forward through thickets and leaf litter with the warning calls of forest creatures disturbed by interlopers. Looking forward, Arem was comforted by the fact that Drake was on a scent trail. Suddenly, Drake darted forward out of Arem’s sight! Arem began to run out of concern for his dog not wanting any harm to come to him. In one moment there was excitement and yet in his collected mind, Arem pondered, “What am I doing in here?” Soon, he saw the fluffy, familiar, now erect and wagging tail of his companion, who stood in front of a hollowed out tree trunk. Drake’s nose was buried deep into the trunk with the rest of the dog bent low with only his rear and tail in the air. Arem could tell from Drakes excited yet playful posturing that his comrade was more amused than concerned or aggravated. “Unless there’s a tiny crying lady stuck in that tree trunk Drake, you’re wasting our time!” Drake backed away from the tree when he heard Arem’s voice. Arem approached the trunk slowly and stared cautiously into the dark crevasse inside. He was startled when he saw the reflection of two copper eyes staring back at him.

“Arem’s Portal” is an insightful journey into a character testing forest of symbolism, foreshadowing, adventure and poetry. It is a modern Hebraic rendering of the classic Indo-Greco kidnap myth. The author’s mesmerizing play of time-space sequences and moments of deep pathos make for an original and thought provoking thriller. Notwithstanding a fast paced story, the attention to details within the book are meticulous and artfully presented. The narrative conveys a timely statement about lost female potential in our own imbalanced society. Dynamic interactions with many endearing personalities engage readers with plot twists that include a redemption story and an unconventional exorcism. “Arem’s Portal” is a book that is designed to honor the best in all traditions but ultimately makes a lasting statement about established values. Most of the book takes place before the advent of Christianity and therefore utilizes Hebrew Scriptures to supplement the moral examples within the tale. Whether one is looking for a light read, a quick thriller or just a thought provoking adventure, “Arem’s Portal” is sure to delight!

Vinod K. Gootam is an Indian American Christian who grew up in a small town in Arkansas. He graduated college with honors in Florida and now works in business, investments, and real estate. He is a supporter of the environment, gender equality, and the elimination of poverty through education.