Lessons in Truth Series: THE EVERLASTING GOSPEL OF THE KINGDOM OF GOD (SPIRIT) WITHIN

A Spiritually Inspired and Compiled Textbook and Reference Guide of Theology, Theosophy,and Philosophy for the New Age Expanded Edition 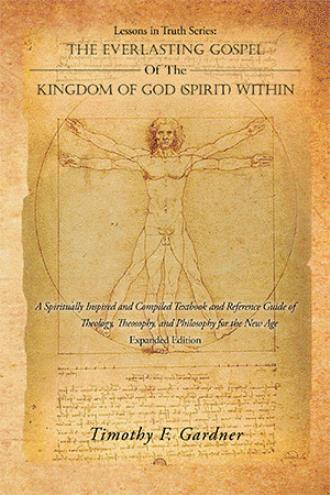 The Substantial Reality: God (Spirit) “I can of mine own self do nothing . . .” (John 5:30), “but the Father that dwelleth in me, He doeth the works” (John 14:10). “If ye had known me, ye should have known my Father also: and from henceforth ye know him, and have seen him” (John 14:7) . . . “Have I been so long a time with you, and yet thou hast not known me, he that hath seen me, hath seen the Father; how sayest thou shew us the Father?” (John 14:9) . . . “I am in the Father and the Father in me” (John 14:10). “I and the Father are One” (John 10:30). “Neither shall they say, Lo here! or, lo there! for, behold, the kingdom of God [Spirit] is within you” (Luke 17:21). With such words, Jesus gave us the key to beginning our spiritual journey back to the Father’s house, and to begin living a life under Grace. With these words He is showing us the non-power and non-reality of life in the temporal, and, He is revealing to us the principle of living in the Spirit, “living in my kingdom”, living in the kingdom of God (Spirit) within, a kingdom that is not of this world. It is beyond us, yet it is within us. In these Chapters you shall be given the spiritual principles necessary to bring you out of the valley of the shadow of death, into the glorious light of the sun within. All of us are searching and striving for a way, truth, or doctrine that will free us of our problems and lead us out of the sufferings, and disappointments that life continually present to us. Down through the ages man has always believed that there was a power or some god that brought about and maintained creation as we know it. Man has also believed that through worship and sacrifice, he could persuade this god or power to come to his aid in times of need. And, man has also presumed that if he could find this source of life, all of his problems would be solved. Thus, man has frantically searched outside of himself, just to find disappointment and frustration, which led him to abandon his search. Then, at the dawn of the Piscean Age, Christ Jesus appeared on the earth plane preaching the kingdom of God (Spirit) is at hand; it is within reach here and now, and all that man needed to do was repent, to change his mind, believe the gospel and follow this doctrine to attain it. Jesus was not the first to bring this message of the kingdom of God (Spirit) within, because it had been spoken in different words thousands of years before He had appeared on earth. However, it was the first time in written history that this truth was openly revealed to the Western world. For up until this time these teachings were esoteric and given to only a select few—from mouth to ear. The central theme of Jesus’ doctrine while he walked the earth revealed to us that the kingdom of God (Spirit) or rather the presence and power of God, is within reach here and now readily available. And, that It is located not in holy mountains, nor in holy temples. Its location is neither, “Lo! here, or Lo! there!” but within you: “The kingdom of God [Spirit] is within you”(Luke 17:21). This was the teaching of the master. The presence of God is within you. Jesus constantly referred to this presence as, “the Father”, “the Father that dwelleth within”, “the I”, and the “I Am”, and Jesus instructed us to look beyond this transient existence and to acknowledge our Oneness with the Father. Jesus stressed that, “He that seeth me, seeth Him that sent me” (John 12:45). Also, Saint Paul, the most influential interpreter of Jesus’ message and teachings referred to this ever-present reality as the, “mind which was in Christ Jesus”(Phil 2:5). Saint Paul also tells us early in his writings not to put hope and trust in the temporal, but to look beyond the shadowy appearances of this transient existence to the one true reality. In 2 Corinthians 4:18 it says, “While we look not at the things which are seen, but at the things which are not seen: for the things which are seen are temporal, but the things which are not seen, are eternal.” Temporal, meaning; of, or relating to time; impermanent, transitory. Transitory, pertains to those things, which pass away with time.

Desire for lasting peace, joy, and happiness is an inherent prompting engaging the senses and the intellect toward an inward search for the meaning of life. The Everlasting Gospel of the Kingdom of God (Spirit) Within is the spiritual guidebook for the Aquarian Age. These writings provide the foundation for spiritual awareness, growth, and development toward the realization of at-one-ness with the source of all life. Your spiritual journey awaits. (please have this in the center format)

Timothy F. Gardner began the study of spiritualism and eastern philosophy at an early age. Inspired by the eclectic philosophy and writings of the Rev., Father G.W. Hurley, and the teachings of Jesus, Buddha, Sri Ramakrishna, Sri Ramana Maharshi, and Joel Goldsmith, his interest evolved and led him to embrace the threshold of spiritual understanding of the Oneness of life through the study of theosophy, theology, mysticism, occultism, and metaphysics. Over forty years of study has afforded the author an in-depth understanding of the concepts of world religion. The author has revealed the erroneous interpretations that perpetuate bondage rather than offer enlightenment and spiritual liberation. To date, the author is an ardent follower of the teachings and life works of Father G.W. Hurley who is the founder of the Universal Hagar’s Spiritual Churches Association. And, in whom this author believes is the Avatar (Spiritual Leader) of the Aquarian Age. Welcome to the dawn.