Coming Down from the Mountain

A Journey through Catholicism to the God of Love 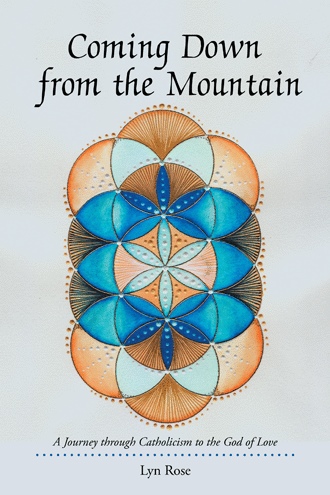 Once a Catholic always a Catholic”. How often over my life have I heard these words? Why does being a Catholic have such a hold on people? I was born, raised, practised and embraced Catholicism for over fifty years of my life to the extent that a great deal of my working life was connected to the Church. My community involvement took place within the Church where a great number of my friendships were formed. So my Catholicism was deeply embedded in me. Growing up Catholic had a huge impact on my life. It was the very foundation where my morals, values and beliefs were shaped and formed. Through Catholicism I learnt about my good mate, Jesus and that I was a sinner and every time I sinned I added another blow to the nails in Jesus’ cross. I also learnt about the importance of social justice and the need to care for others. I did not, however, learn about the importance of caring and nurturing myself so that I could give freely and lovingly to others. I learnt to be suspicious of the ‘other’ – anyone who wasn’t a Catholic and living by the rules. This often led me to make judgements of others. For me, though, the saddest thing of all was that I learnt to fear God and that I had to be worthy to receive God’s love. Over the last few years I have been on a spiritual journey of many new learnings and understandings. I now happily and freely say that I have come to a new spiritual awakening which means I no longer associate myself as a member of the Catholic Church. While I had often questioned many of the Church’s teachings, I now had to, with honesty and integrity, admit to myself and others that I no longer wanted to be connected with my Catholic faith. Arriving at this decision has been like going through a tunnel (a very long tunnel) and coming out the other side into a new light. There are many people who were raised Catholic who have given up on religion. They still have a deep spirituality and a belief in God/higher power/universe/divine self. Some people, however, have not only walked away from the church but have ‘thrown the baby out with the bath water’ and have lost touch with their own spirituality; their belief in God. Meeting people in this situation, talking with them about my experience and seeing their transformation when they once again embrace the God of love has been a real gift for me. A number of people have been amazed at my journey through Catholicism to who I am today. They have urged me to write about my journey in order to help others on their spiritual journey. I had never seen myself as a writer, however, an opportunity arose that changed my view. In 2010 the book ‘Women Journeying with Spirit’ Ginninderra Press was launched. It was edited by Deidre Michell and Jude Noble and gathered together 13 women’s journey with spirit. They had noted that the majority of books available on women’s spiritual journeys were from other countries and that there was very little written by Australian women. I was invited to be a part of this collection of amazing stories. Here was the opportunity which had been nagging away at me. This idea was being presented in a way that seemed very ‘doable’ for me – a chapter in a book was so much easier to handle than a whole book. The process took a couple of years and when the book was finally launched I felt a sense of relief that my job was done. However, when I reread my story I realised that the ending was where my new journey in faith was really just beginning. So, instead of the release I was expecting, it intensified those ‘little voices’ that kept urging me on to write my story. Laying myself bare by sharing my story, my learnings, my struggles, joys and the wisdom gained over the years, I hope will enlighten others to discover, embrace and delight in the wonder of God’s unconditional love and the beauty of their divine selves.

Born into a strict Catholic family, author Lyn Rose grew up believing her life was destined to be devoted to God. Eager to attend Mass at any chance, by age thirteen Lyn enrolled in a Juniorate, a boarding school to prepare her for life as a nun. When she finished at age sixteen, her dream was shattered when the head nun told her mum she was too happy to be a nun.

Believing her devotion was meant to take a different path, Lyn became a wife and mother. She was actively involved in parish life and spent twenty years working in various agencies of the church. While her passion for pastoral care grew, her belief in the church started to falter. She witnessed, and personally experienced, the church failing in its primary role of caring for its people.

Then in 2007, while on retreat in Assisi, Italy, Lyn had a vision that changed her life. She discovered a God of love—a God separate from the oppressiveness of the Catholic Church. In Coming Down from the Mountain, Lyn shares the story of her life journey and how she found the power of forgiveness and the joy of experiencing God’s unconditional love without fear or guilt.

Lyn Rose has undergone studies in theology, counselling, and spiritual direction. She has worked as a pastoral care giver and is currently a Reiki practitioner and teacher and leads meditation classes and silent retreats. She currently lives in Adelaide, South Australia.