Drinking from the Divine Fountain 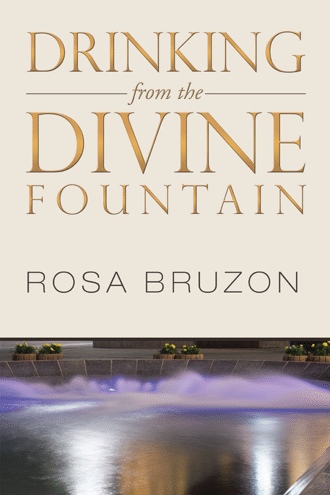 One early morning, I decided to write down the story of Violet and I chose the title ‘Drinking from the Divine Fountain’ from one of her early visions in a dream. My intention was to reveal to others the wonderful experience she had in her last incarnation. Her story is an adventure, revealing a spiritual deed of love performed on several levels of consciousness. Violet was only seven years old when all began to take a semblance of reality. She was born in a working-class family striving to survive in the midst of a material world in crisis. Although surrounded by the love of her parents, on occasions she was surprised by the hatred in her surroundings. They were living during a savage civil war in a neighbouring country from where her grandparents had emigrated thirty years previous. As much as she could be, Violet was always protected by her loving parents and grandparents as well as the celestial powers surrounding her. She was gradually becoming aware of them but said nothing because she thought everyone was having the same experiences. Although she was free to think and act as she pleased, she was guided and protected when having to face the outer world where she encountered unavoidable jealousy, anger and despair as well as poverty and wealth facing each other all around her. Violet only had one ambition and this was to be like everyone else when all around her seemed to point out that her life had to be different, almost unique because her soul had come to this world with a special mission to perform. Since her childhood, her mind and soul had to be gradually prepared and informed in details about every step she would have to take later. This was done slowly and carefully, well in advance of the moments in which she would have to perform her particular task. As a child to begin with and later as a teenager, it was rather exasperating having to wait long periods for more information to be disclosed by the Great White Masters. They very seldom gave her a name. All through her life she couldn’t wander around nor deviate from her path as she was constantly reminded of the little time she had to get ready for her special duty. It was all very mysterious although she was warned that her mission was a serious matter and she could not deviate from her path. This is why I decided to put together all the notes she had written through the years and make a life story that anyone can read and take from it the information each individual can understand. Life is a most wonderful thing which has been entrusted in our clumsy hands. With this gift of incalculable value we are able to be and feel independent, free to learn through our own experiences. Once we have learnt enough, we need to put our knowledge and experience at the service of the Great White Masters. We must take into account that life isn’t always kind and perfumed like a bed of roses, nonetheless, when every dark cloud passes and distances itself from us, physically and mentally we feel fortified and certainly much wiser than we were before the dark experience. If this doesn’t happen we haven’t learnt the lesson encapsulated in that experience as the trauma caused by it has left us in shock. It will be much later when we discover the importance of the steps we have made. If this is not enough, we can be sure that the experience will repeat itself in a slightly different way and will be doing so until we discover that it is trying to teach us a lesson. When this happens, we have reached the end of that test and the beauty of it shines in our mind’s eye and we are prone to declare that God is wonderful. We don’t realise just yet that He is indeed ‘great’ because what is always working within us is a system which was implanted in the most inner part of each individual by our Creator. It is the God within us, the wonderful genie who can play all the instruments and compose the INNER SYMPHONY which is an ever increasing one. As it happens to everyone, it also happened to Violet, and the way in which it unfolded itself seemed to her like watching a film on a screen. The benefit of having written it down after it happened is that it has prevented any important detail from falling out of her memory. Violet had been receiving all the necessary information to guide her to something else which was very elusive, hidden and difficult to classify. She was always waiting for the last piece of information to complete the story. Perhaps it could be a prophetic dream announcing something for the future, and at last it came! A son was announced to her but first she would have to marry a particular man as together they would attract to themselves this special child who would need their loving care. Violet wasn’t surprised by the announcement as she herself had been announced to her parents long before she was due to incarnate. She thought that when the time came near to this important deed, the Spiritual Beings would add more important details to what they had already given. There would be no more secrets and everything would be revealed. Violet’s story began when her parents met at the beginning of the 20th century and eventually she got to know how her father and mother saw her first in spirit and recognised her when she was a year old. Life was repeating itself or was she mistaken?

Violet’s life story depicts how love sealed her destiny by reuniting with the Black Magician resolving a negative karma created centuries ago.

Rosa was born in Tangier, Morocco. She also lived in Paris for a time until she met her future husband and moved to England, where she still lives. She has three grown up children and four grandchildren. Rosa is fluent in Spanish, French and English and wrote two romantic novels published in Barcelona in her early twenties. She now dedicates her life to teaching and writing.