A Firsthand Look at the Illness and How I Beat It! 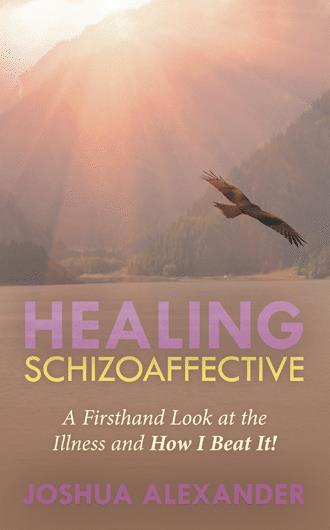 At this point I am enough out of the woods that I feel comfortable telling my story. I have sustained a full-time job for over three years, I am happily married, and I recently bought my first home. I am completely symptom and side-effect free, and for all intents and purposes, I am living a healthy and normal life. In fact, I feel that after having gone through the experience of a debilitating mental illness, I am a better person for it. I am more down-to-earth, humble, caring, and compassionate. My worldview has been reshaped and expanded, and I am more conscious of what really matters in life—and more grateful for it.

It was a decade-long fight, with my first symptoms appearing at age twenty-one, until I finally got off of Social Security disability at age thirty-one. I was first hospitalized in an inpatient unit on the seventh floor, shortly after my twenty-third birthday, and spent Christmas that year in the hospital. I was diagnosed with schizoaffective disorder. At the time, I thought some of the nurses were aliens living among us to help us evolve. The National Alliance on Mental Illness (NAMI) website describes Schizoaffective disorder as follows:

One in a hundred people doesn’t seem like a lot (and some estimates put it at one in two hundred), but if you take the US population in 2013 of 316 million, that would mean that around 3.16 million people in the United States alone could have schizoaffective disorder. That’s a lot of people, and that’s just one form of mental illness. (Schizoaffective disorder is actually less common than schizophrenia!) What’s unfortunate is that many people with mental illness are not able to advocate for themselves, do not have the resources available to meet their needs, and are still subject to stigma and blame around their illness, although awareness around this issue is rising.

One of the more difficult lessons that I learned during the early years of my illness was that the illness is a real thing. When my psychotic symptoms would come on, they seemed like an extension of my normal experiences, and like many people, I did not have a strong awareness that I was sick. I knew or had read about people who had similar thoughts or experiences to my “symptoms,” and they were leading normal, even successful lives. I thought that I just had heightened perceptions, and that I could sense things that other people couldn’t. After all, the “diagnosis” is made based on matching patient reports and doctor observations with a few criteria in a book. It is not as black and white as a broken bone, something that can be seen with diagnostic tools and measured.

It wasn’t until after my first major relapse that landed me back up on the seventh floor that I realized the illness was real. I had tried everything in my power to stay well: healthy eating, exercise, social integration, a structured schedule, and psychotherapy. I had given it all I had, and I still ended up back in the hospital. I felt incredibly powerless to change my situation. It felt like a black hole, and—like light that cannot escape its gravity—no matter how strong I was, I could not escape. I was unable to hold down a job, take care of myself, socialize normally, or lead a normal life in any way, shape, or form.

At one point (I think during the inpatient stay after my first relapse), my perspective on the illness shifted. I stopped questioning whether or not the symptoms were real and started looking at the illness as an inability to function in my life. That fact, that I could not make my life work, was what I began to see as the illness. This simple shift in perspective created a tremendous sense of relief for me, and I felt a newfound acceptance of my situation. I now had an opponent, something to fight. My mission would be to regain functioning in my life, and I would pull out all the stops.

Part of what made it so hard for me, and what was probably also a blessing, was that I still felt like myself throughout the whole experience. Inside, it still felt like me. I did not feel ill deep down inside, but my experience of the world was very altered. It was like living inside a Stanley Kubrick film, where the world is scary and does not make sense.

At that time, I also started to look at the illness as more of a brain disorder. My mind (or my inner awareness) seemed to still be working as it always had, but the data it was being fed—and its interpretation of it—was all garbled. A couple of times I realized that some of my delusions stemmed from my mind trying to process such a fragmented experience of reality. It was like my mind was filling in the gaps in my experience, and some of the thoughts that had “bridged” the gaps were my delusions.

At that time, I made a decision to let go of any resistance or rigid beliefs that I had around my recovery. I would utilize all of the resources at my disposal, even medication (which I was strongly opposed to), to get better. I was going to get back on my feet and get my power back, so that I was not at the mercy of the illness or my situation. I was going to beat it!

The intention of this book can be seen in the following journal entry written during the illness: “It’s what I have learned from my experience that motivates me to keep going. I know that someday, and even today in little ways, I can use what I’ve been through to help people. That’s the greatest gift. I don’t look at this disorder as something I have to bear. I look at it as something that can inspire me to live a better life.”

Joshua Alexander is a Cornell graduate who was diagnosed with schizoaffective disorder, and spent 10 years battling the illness, being hospitalized, and at one point living in a group home for the mentally ill. Eventually, with the help of a homeopathic doctor, he was able to heal from the illness for good, go back to work full time, get married and buy a home, and is now living a normal life.