A Reflection on a Complex and Often Prickly Father/Daughter Relationship 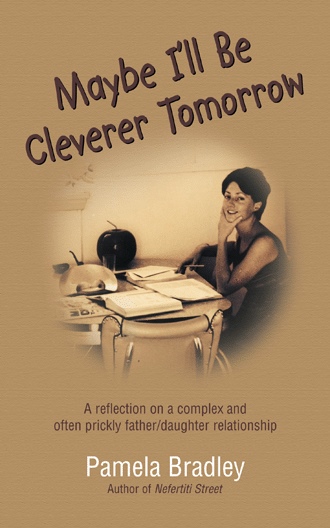 The train rolls slowly into the platform, and there he is – the man who for over four decades I have thought of as tough and critical, a man who could impale me with a few carefully chosen words. As I alight and walk towards him, I wonder what the hell the next few days will bring.

When Pamela Bradley stepped off the train in Murwillumbah to visit her father, who at seventy-eight had chosen to live a solitary life Up North far from his family, she had no idea she was at the beginning of an intensely emotional journey. Faced with his slow decline, she set out to delve into his past to find those influences that might have shaped his character and helped to define her own, discovering much along the way that came as a complete surprise.

In Maybe I’ll Be Cleverer Tomorrow, Bradley shares an honest and personal memoir told with insight, humour and tenderness as she seamlessly moves between past and present. Throughout the story, she weaves some of the vital issues about loss, ageing and death that affect everyone, while the vignettes of a childhood and adolescence in the 1940s, ‘50s and ‘60s offer glimpses into an Australia that has long since disappeared.

Pamela Bradley was educated at Sydney University and is an ancient historian. She has published thirteen nonfiction books, including this, her second memoir. Bradley loves exploring the mysteries and wisdom of ancient cultures, reading about discoveries on the frontiers of science, and meeting people who “have taken the road less traveled.”

See www.pamelabradley.com for all books