Raju The Elephant Who Cried

A True Story of Kindness and Compassion 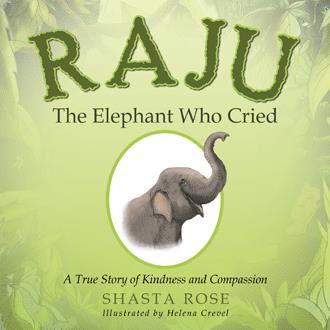 Raju the elephant was born in a jungle in India, a beautiful land filled with many exotic animals. His mommy and daddy were so happy the day he was born. They loved Raju dearly and kept careful watch over him to be sure that he was always safe and had plenty of food to eat. Raju was a very happy little elephant. He loved spending his days playing with the other baby elephants in the herd. In the mornings they would play hide-and-seek in the jungle, running around happily without a care in the world. The long, hot afternoons were spent leisurely bathing and cooling off in the gently flowing river. Their favorite game was seeing who could spout water the farthest from their little trunks. “This is so much fun!” shouted Raju to his friends. One bright, sunny day Raju was playing happily with his friends in the river when they were startled by a loud, strange noise. They all stopped and looked at one another, wondering what they should do. Then came a loud warning sound from the leader of the herd. “Run into the jungle! The two-legged creatures are here!” she shouted. The entire herd began running as fast as they could into the jungle. There was so much confusion as all of the baby elephants ran from the river, trying to find their parents. Raju ran as fast as he could, but in all the chaos he became separated from his friends. He quickly found himself all alone in the jungle. Raju was so scared that all he could do was stand there and shake. Frightened, Raju cried out as loudly as he could. “Mommy, Daddy, where are you? I’m scared! Please come find me!” Then Raju heard some rustling in the bushes and thought to himself, “Mommy and Daddy are coming to save me!” He felt relieved thinking that he was about to be reunited with his family and the rest of the elephant herd. But instead of seeing his parents coming through the bushes, he saw strange-looking creatures he had never seen before. Were these the two-legged creatures that his parents had warned him about?

Children and adults of all ages will be inspired by this true story of Raju, the elephant who cried tears of joy as he was being freed from a lifetime of captivity and hardship. It is the author’s hope that Raju’s story will instill a greater capacity for empathy and compassion for all animals, and promote conservationist values in our children from a young age.

Born and raised in Southeast Texas, Shasta Rose has lived most of her life in Hawai’i where she raised her daughter as a single mom while running a destination wedding and photography business. Her lifelong journey of introspection and self-discovery has led her to feel a deep compassion and empathy for all living beings, both human and animal. Feeling deeply moved by Raju’s story, she felt compelled to write about his plight with the intention of helping to alleviate the suffering of animals at the hands of humans. You may contact her by visiting her website shastarose.com. A portion of the proceeds from the sale of this book will be donated to Wildlife SOS Foundation in India to care for Raju and the many other elephants at the sanctuary who need our help to live out their lives in peace and comfort.