There are Angels on my Stoep 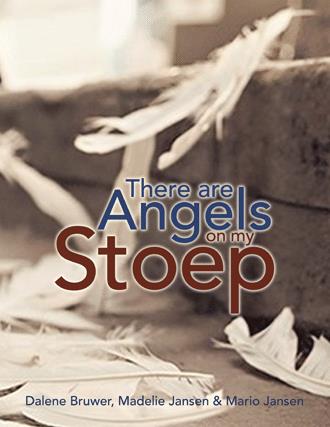 I am a single parent of two gifted children, Mario and Maddy, who are blessed with some of the special gifts written about in the Bible in Corinthians 12 verses 1 to 10:“The Spirit gives one person the ability to speak with wisdom. The same Spirit gives another person the ability to speak with knowledge. 9 To another person the same Spirit gives courageous faith. To another person the same Spirit gives the ability to heal. 10 Another can work miracles. Another can speak what God has revealed. Another can tell the difference between spirits. Another can speak in different kinds of languages. Another can interpret languages.” And in 1 Corinthians 13 verse 1:“I may speak in the languages of humans and of angels.......” One day, while I was sitting on my stoep, after deciding to write this book, I closed my eyes to ponder where to start. I opened my eyes and looked at my two children, laughing and talking and having fun. This is where our story begins, with my two children, my ‘angels’ on earth, Mario and Maddy, who can feel and see and communicate with the spiritual world. Mario is the calm and patient one. He is now 32 years old and very wise. When he speaks one cannot help but listen to what he says. He can talk to me or his friends for hours, sharing his wisdom. Although he is assertive he also knows how to listen. When you ask him a question, any question, he will concentrate and contemplate how to answer, even if it is about something mundane, like how his day went. The meaningfulness of his words is very important to him. Maddy is 25 years old and full of ups and downs. Sometimes she is too quiet and other times she talks and laughs non–stop. It seems as if she is not really comfortable in her own skin because she does not know how to handle her gifts. It is very difficult for her to trust someone sufficiently in order to share her gifts. She is afraid of being judged or rejected. This is actually not surprising to me, because I feel the same way about their gifts, and that is why I decided to write this book, with their assistance. Mario and Maddy are like the flip sides of a coin, with two total different personalities. However, they are alike when it comes to their spiritual gifts, they can feel and see and talk and walk with angels, like two peas in a pod. Mario was diagnosed with dyslexia when he started school. Consequently, from the very beginning of his school years he had problems with spelling and his handwriting was, and still is, almost illegible. Since he is intellectually gifted, he overcame the spelling problem by learning how to spell each and every word. I remember a teacher once wrote in his book that he ‘writes like a pig’. In school he was a loner with very few friends. Some thought of him as a weird kid. He was about 18 years old when he told me that he could see spirits. You can imagine what a shock it was to me. I immediately phoned a friend who was a psychologist, to tell him about this revelation. The first thing my friend asked, was, ‘Are they friendly spirits?’ ‘I think so,’ I answered. He then told me to sit tight and that he was on his way. As you can imagine it was not the response I wanted. He could at least sound as scared as I was. He calmed me down over a cup of tea and was and still is one of the few friends who did not judge me or the children. Maddy was also diagnosed with dyslexia as well as ADHD when she was very young. She attended a school for special needs for two years and then proceeded to a mainstream school where she matriculated. She was hyperactive and also did not have many friends. Although she overcame the hyperactivity, she still has dyslexia and therefore, since high school, prefers to write in English, so that she can do a spelling check afterwards on the computer. This book is consequently written in English, although it is not our mother tongue.

Author: Dalene Jansen Co-authors: Mario Jansen & Maddy Jansen Dalene studied Education and Teaching and has been a teacher for children with special needs, for fifteen years. She then completed her Master’s Degree in Play Therapy. After her divorce she started lecturing Early Child Development and Educational Psychology at a collage in Stellenbosch, near Cape Town. Her husband died in 2006 and she became the single parent of Mario and Maddy, the co-authors of this book. Mario is a qualified photographer and is working as a movie and commercial cast coordinator. He is also a life coach and spiritual councilor as well as a healer. He presents workshops and various topics like spiritual awareness, angels and healing. Maddy is a qualified game ranger and field guide. She is an animal healer and can also communicate with animals. She teaches people about animal behavior and rehabilitates them to live in harmony. This book portrays how the authors experienced and perceived their spiritual life. It is based on their true story. During their school years both Mario and Maddy discovered that they have special spiritual gifts. They were amazed, but also afraid and did not know how to handle it, or what to do with it. They were also afraid of being judged by people who don’t understand, as in the beginning they themselves did not understand these gifts. Through their spiritual path, and with support of their mother, they have learned mot to be afraid and to embrace their gifts and to use it for the good of people and animals. They take the reader through their experiences with angels, spirits, demons, communications with animals, and many more.