A Treasure of the Heart

A Journey of Satsang, Awakening, and Evolution 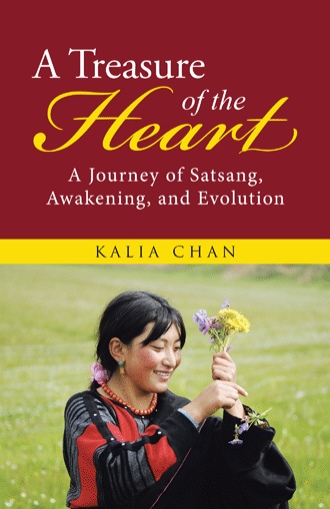 Desire As winter moved into spring, life and warmth returned. The abundance of winter’s rains had offered a deep vitality to the land. A sensual variety of scents, sounds, and sights pervaded the forest, trees and meadow. Life was beginning anew and many of nature’s beautiful creatures reappeared, feeling their link with the seasons. The pair of squirrels that Mark loved so much were once again playing and chattering in the trees. He watched as they chased each other from tree to tree, limb to limb. They bolted at top speed along tiny branches and then suddenly switched directions with mere ease. They flung themselves out into the air, freefalling for a few moments and then with utmost accuracy landing once again on questionable tree limbs. One beautiful day in early spring, as Mark watched the squirrel’s antics, he found himself in the meadow. His eyes and heart were wide open and full of wonder. He felt a renewed vitality within. There was joy… and something else. However, in the next moment, a sight multiplied his joy ten-fold. Tsogyal was walking across the meadow towards him. She had an enormous smile for him as well as a long and loving embrace. Mark’s heart was almost in his throat from seeing Tsogyal and feeling her. She was absolutely gorgeous! She wore a skirt and sleeveless blouse that displayed her beautiful form and showed ample amounts of exquisite skin. Her long and sleek black hair swept over her shoulders and down her back. Instantly, Mark’s libido fired up, a raging inferno of hot desire. He wanted her like he had never wanted anyone before. He could not hide it from her. He wore this on his sleeve, on his face, and in his body language. He felt vulnerable, but he wanted her to know how much he wanted her. To his shock, she did not appear surprised. Looking deeply into his eyes, Tsogyal stayed close, like a lover. So close that he could feel her body pressed up against his. His body was on fire. There was nothing else. There was only desire. Mark was about to lean in to kiss her luscious lips when she whispered in his ear. “Stop. Just feel this.” Her voice was breathy, as though she also wanted him. Looking into her eyes, he saw it. His heart leapt. She desired him! From the look of it, it was intense. He felt her body shudder, as though she could barely contain it. Mark almost lost control. She continued to whisper in his ear, as though she was saying intimate things to a lover. “Desire is natural. This is blissful energy. Let me show you what else this energy can do. We interpret this desire as wanting sex. There is also another way.” Mark couldn’t imagine what other way there could be. It was a sweet anguish that erupted in something painful when she stopped him. However, he was mindful of his reaction and realized that he trusted her, now more than ever. “Ok. What do I do?” “Recognize your expectation. This had your desire bottled up in a contracted state.” “So what is desire like when I am not in a contracted state?”……… ~ Mark began to follow her instruction. Tsogyal went silent to allow him space to be with his desire. He sat down and felt it. He went completely into it. Like Tsogyal said, it was intense. Then his mind began to relax. There was only the desire. Minutes passed. And then it hit him. His eyes snapped open. “Tsogyal! This desire…..” Struggling to find the words, Mark finally blurted out the first thing that came to him. “It’s so pleasurable…It’s pure ecstasy!” Tsogyal laughed and her eyes twinkled. “When you are able to merge into the energy of desire, it is experienced as pure bliss. The ability to experience bliss is a maturing of desire. Bliss is unattached desire. Bliss is the energy of Shakti, the power of life. Mark took a deep breath. An amazing thing had just happened. The intense feeling of wanting was gone. Now when he looked at Tsogyal, he experienced streams of bliss running throughout his body. He took some time to bask in the miraculous streams of bliss. Deep inside, something softened. From a new sense of tenderness, he could feel an ocean of love within. Slowly, and with a deep sense of gratitude and love, he leaned in and embraced her. For an eternity, he held her close.

A young American man meets Tsogyal, a Tibetan woman, who shares with him teachings on awakening, evolution and liberation. The “creedless truth” that she shares comes from her own awakened insight as well as her knowledge of many spiritual traditions, including Taoism, Buddhism and Christianity.

An adventure of the body, mind and spirit follows as Mark, the young American, proceeds through his life, experiencing many ups and downs. His journey borders on the magical as he proceeds to embody the teachings, and more importantly, the awakening.

Throughout it all, Tsogyal helps to ground him in the here and now with an uncanny and miraculous capacity. Her skill, compassion and wisdom never fail to wake Mark up. As Mark’s process deepens and his own capacity for love and wisdom increases, he discovers something in Tsogyal. That discovery, at first a source of suffering, later becomes the ground of the “juiciness” of awakening.

In 2003, after sitting with Adyashanti for a couple of years, Kalia experienced a “recognition”. He continued to sit with Adyashanti for another five years. In 2009, the skillful means of Vajrayana awoke an ongoing process of energy and penetrating awareness. A few years ago, another “recognition”, this one brilliant luminosity, occurred in the presence of Ammachi, the “hugging saint.” Kalia currently lives near Sebastopol, California with his cat, Lion.