Self-Sabotage: The Art of Screwing Up

Understanding the How, Where, When, and WHY We All Do It! 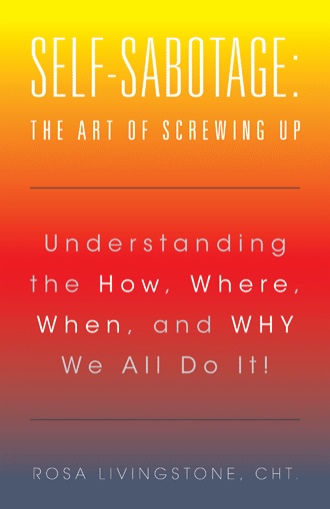 Each of us has an inner critic judging our every action and instructing us on how to live our lives. It’s in the shadows, below the level of our conscious awareness. Self-sabotage is something everyone does. And many blindly wonder why they are stuck, feeling alone, defeated, frustrated, and angry. In Self-Sabotage: The Art of Screwing Up, author Rosa Livingstone enlightens you about what self-sabotage is, how we do it to ourselves, where it appears in our lives, when we do it, and most importantly, why we do it in the first place. Using examples from her personal journey and from stories of her hypnotherapy clients, she offers simple tools and ideas on how to shift from being self-critical to self-accepting. Livingstone shows you how to face your self-defeating thoughts and habits, take responsibility for them, and stop the cycle of self-abuse and sabotage. Self-Sabotage: The Art of Screwing Up offers the resources for overcoming fear and gaining the courage to move toward living the life you want, using all that is inherently amazing within you.

Rosa Livingstone is a clinical hypnotherapist with over a decade of experience partnering with clients to help them overcome self-sabotaging perceptions and habits. Livingstone presents workshops, free lectures, and media interviews. She lives in Coquitlam, British Columbia, Canada, with her husband and her two sons. Visit Livingstone online at www.aloadoffyourmind.com.