Light with No Shadow 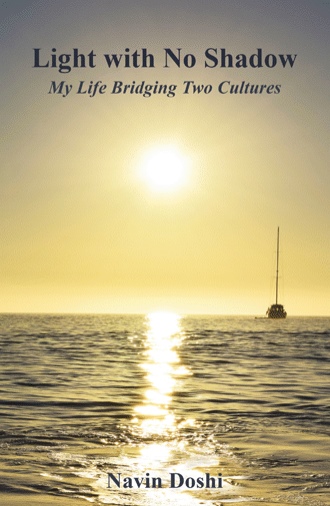 Navin’s gripping account of our times and culture is marked by a sincere wish to heal and a remarkable capacity to balance compassion and criticality.

As a long-time student of Indian philosophy, he observes about the Sankhya distinction between Purusha (eternal, unchanging Consciousness) and Prakriti (Nature, changeful and seemingly unpredictable): “Nature’s nature is to create pairs of opposites within and without. One must learn to bring balance and harmony by complementing the opposites for transcendence and immanence”. He explains in his memoir that one way to follow the path of transcendence is building bridges between feuding opposites for greater good.

Doshi came to United States in 1958 for higher studies in engineering, receiving a second Bachelors and a Masters degrees from the University of Michigan. Carrying on postgraduate studies at UCLA, he worked as an aerospace engineer receiving US patents and NASA awards. He changed direction in the 1980s becoming a businessman and a trader/investor. Doshi, with his wife, Pratima, endowed a chair in Indian studies at UCLA in 1999, a professorship at the Loyola Marymount University in 2005 which administers the annual Doshi Bridge Builder award, and another professorship in Consciousness Studies at the California Institute of Integral Studies in 2012. Doshi is also one of the co-founders of Nalanda International, a non-profit organization for promoting excellence and research in Indic Studies. Recipient of numerous honors in India and USA including the Maharishi award, Navin Doshi is the author of the books, Transcendence: Saving Us from Ourselves (Ithaca Press, 2009), and Economics and Nature (Nalanda International, Los Angeles, 2011). He writes articles on economics and philosophy, which are published in various periodicals and can also be read at www. Nalandainternational.org.