A Boot Full Of Piss 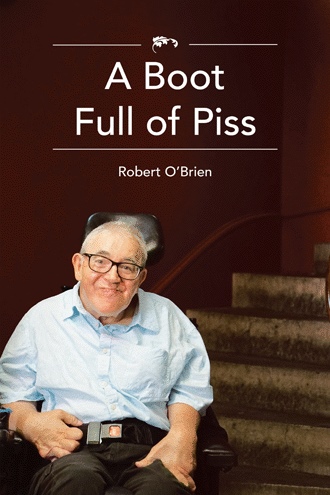 I've been writing this book for sixty three years. Sixty three years. That’s long enough for scotch to go from good to great to unforgettable to lethal. It's long enough to justify the three 21st birthday parties I celebrated! It's a long bloody time in anyone's book – and finally, here's mine! Ever since I first learned to hold a pencil back in Carlton Yooralla until my last computer upgrade in 2013, writing has been instrumental to my ability to communicate. It has been crucial in helping me collect my often racing thoughts, and therapeutic in expressing the overwhelming feelings and emotions that define one's life. Especially a life as challenging as mine, though I'll let you be the judge. Through pen on paper, typewriters (electric and static) and the frustrating wonders that are computers, I have collected my life in stories. Via these many mediums and many drafts, lost and found, my whole life has made it to print one way or another. As I near my 70th birthday, the time has come to make the journey from notepads to novel; from post-its to print; from back-ups to book. But where does one start such a task? What makes it in? What gets left out? From my own perspective, every tiny detail of my life seems utterly crucial – if of course, I remember it. If I can't remember, then it can't have been so important, can it? Of course, as word spreads of my final composition, people from the past, and many more who've been with me all the way along, showed up to remind me of so many more tales of my wins and woes. So, rather than simply edit down my existing drafts, I decided I would use them as a point of reference; a to-do list, and map, of all the people and places I had to visit, track down, return to, or recall, to get the best take on all things Robbie. It made for an interesting year. Dozens more drafts, hundreds of interviews, recordings, and countless pages of print outs and notes have crossed my desk this last twelve months. Another book surely lies in the material not featured in this story. Maybe this is only Volume One! There was, however, one part of the book that was decided on years ago. No matter what would make it in or get left out, one definitive story stood the test of time, and summed up so succinctly, my life with Cerebral Palsy. One of the defining traits of Cerebral Palsy is muscular spasticity – a condition where-by the otherwise co-operative muscles of the body resist and pull against each other. For example, in one's arm the triceps contracts to extend the arm, and the biceps contracts to bend it back in. Spastic muscles have a tendency to get confused signals from the brain, say, to contract and relax at the same time. This is the characteristic stiffness or shakiness that many people see in people with cerebral palsy. This isn't limited to the limbs and larger muscles. It can afflict any muscular group of the body, and one of my personal idiosyncrasies is a spastic bladder. From when I was a kid (one of my earliest diagnoses) through to today, the simple act of taking a leak has been a saga for me. One day I'll have the bladder of a camel, storing up a good percentage of the Pacific Ocean and refusing to relinquish a drop; the next, every fluid molecule I contain will pour straight out – Do Not Pass Go; Do Not Collect $200. In 2000, I was fitted with an in-dwelling catheter. For those not in the know, that's a rubber tube into your bladder, running straight through up your bits. Yep. Right up in there, twenty-four/seven. But wait! There's more! The catheter runs to a bag that I would wear on my leg, creatively dubbed a 'leg bag.' Assuming my waterworks were co-operating that day, the bag would fill, and require emptying during the day, via a handy tap.

A Boot Full of Piss

No five words could have more perfectly captured the spirit with which I have lived and will always live my life as a man who is unapologetically forthright, proudly inelegant, full of unexpected contents, and always good for a laugh.

My name is Robert O’Brien, and this is A Boot Full of Piss.

Robert O’Brien turned seventy on the thirteenth of March, 2014. He has been writing all his life, beginning as a way of helping him communicate when people couldn’t understand his speech.

Robert wants everyone to know that people with disabilities are still people with feelings, loves, hopes, and dreams.